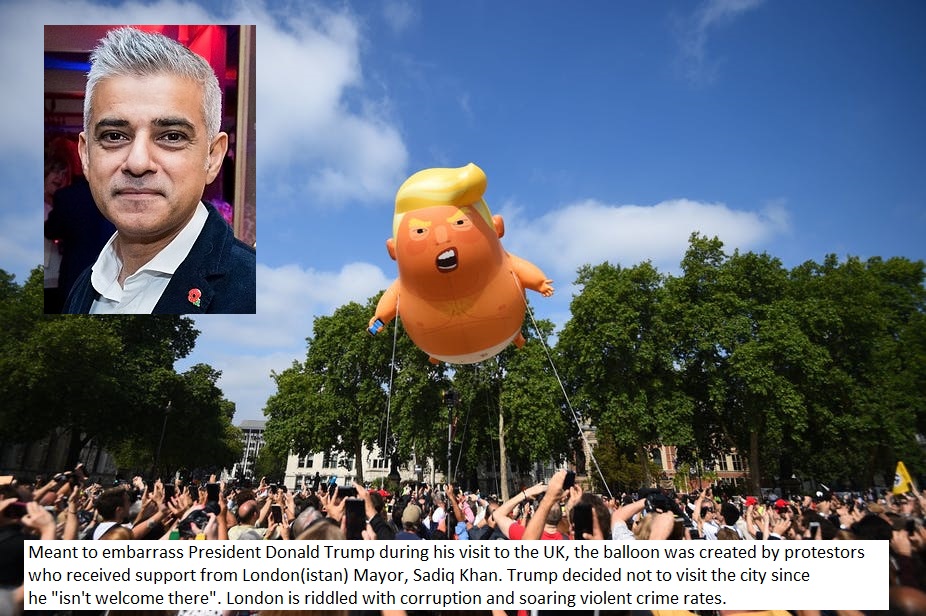 On Thursday, President Donald Trump will visit the United Kingdom following the NATO summit. The United States and the UK, once considered to be ideologically aligned are now at odds.

In spite of being close allies the UK now more closely resembles the former Soviet Empire that both countries once stood steadfastly against throughout the Cold War, than that of a free nation.

The media reports that UK citizens will be protesting the president all over London, with the praise and support of the city’s anti-Western mayor, Sadiq Khan.  As a result President Donald Trump has made it clear that he will not spend time in London itself since he is not welcome there.  Sadly, left-wing progressivism with the mouthpiece of the mainstream media has moved the UK to a barely recognizable position.

Leftist policies have gripped the tiny, once powerful, country that boasted the Magna Carta. But as Winston Churchill once warned, the adoption of socialism as a form of government would eventually result in communism, and that is indeed what is happening in Britain.

In a speech from 1945, Churchill asks of Socialism: 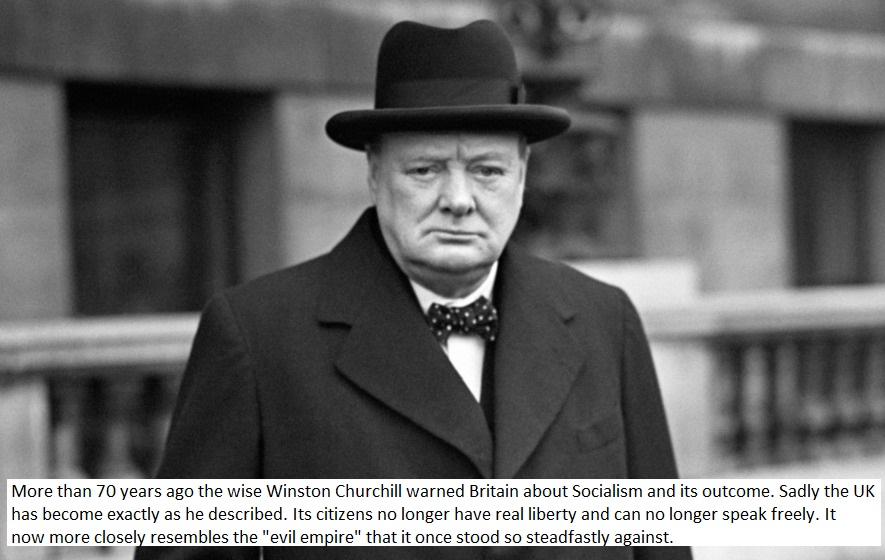 “How is an ordinary citizen or subject of the King to stand up against this formidable machine, which, once it is in power, will prescribe for every one of t hem where they are to work; what they are to work at; where they may go and what they may say; what views they are to hold and within what limits they may express them; where their wives are to go to queue-up for the State ration; and what education their children are to receive to mould their views of human liberty and conduct in the future?”

In spite of the left’s struggle to wrestle away freedom from the masses at every turn, there is still liberty in the United States.  However, today’s United Kingdom has given up its liberty almost entirely, thus cementing the ominous warning from Churchill.

Slowly, over many years the UK has become the antithesis of its past.  The education system, the healthcare system, parental rights, sensible immigration policy, and freedom of speech are examples in British society that have all come under attack over past ten years.

In April of 2017, the National Union of Teachers(NUT) voted to be able to teach LGBT lifestyles to toddlers as young as two years old. At a union conference these teachers discussed how they would teach this misinformation to youngsters even against the parents’ will.

Although the toddler curriculum was not approved by the government, there was no penalty for going through with it anyway. In reality, UK public school teachers are allowed such behavior as their big government ideology hold that children belong to the community and not their parents.  While there is no such law actually written, those who oppose it will find their words to have fallen on deaf ears.

Such was the case for parents of Charlie Gard, a baby with a rare genetic disease. Against the parents’ wishes, doctors at the Great Ormond Street Hospital, a government-run facility in London, sought legal action to kill little Charlie when they decided that he was terminally ill. 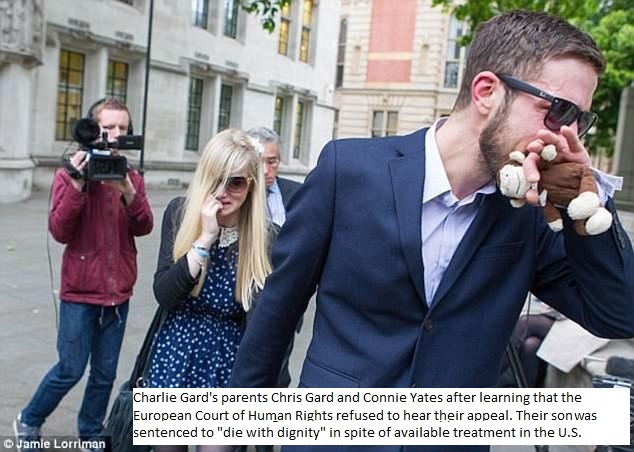 Chris Gard and Connie Yates managed to raise $14 million for an experimental procedure by a specialist in the United States.  There was a small chance that the treatment, which had shown promise in other children, would work for Charlie. In spite of this, the doctors at Great Ormond Street refused to back down, forcing the parents to waste precious time in a court battle.

Eventually, they lost the case and by the time the world became aware of the baby fighting for his life, his condition had deteriorated beyond anything that treatment might have helped. In the end, the parents had no say in their own child’s treatment. In fact, the UK doctors even refused to allow the baby to die at home at the parents’ request.

One of the most troubling occurrences in the UK is its rapid breakdown of the Western Culture in the country. Academia, the intellectual class, and elites have all argued against Western values for many years. At the heart of most of the debate is usually Christianity. Leftist generally view Christianity with disdain and attack it for its values which teach self-sufficiency, self control, morals, and personal responsibility.

Despite the fact that the degree a society practices Judea-Christian values is correlated with the amount of crime and corruption that occurs, leftists dismiss it as antiquated and untrue. They treat those that practice it with resentment.  Thus, it is ironic that the left would go out of its way to accommodate another religion with a much greater propensity for extremism.

Through its open border immigration policy, the United Kingdom has accepted hundreds of thousands of so-called “refugees” from war-torn countries throughout the middle-east. This has caused an onslaught of Muslims, many of whom are radicalized, to enter the country. 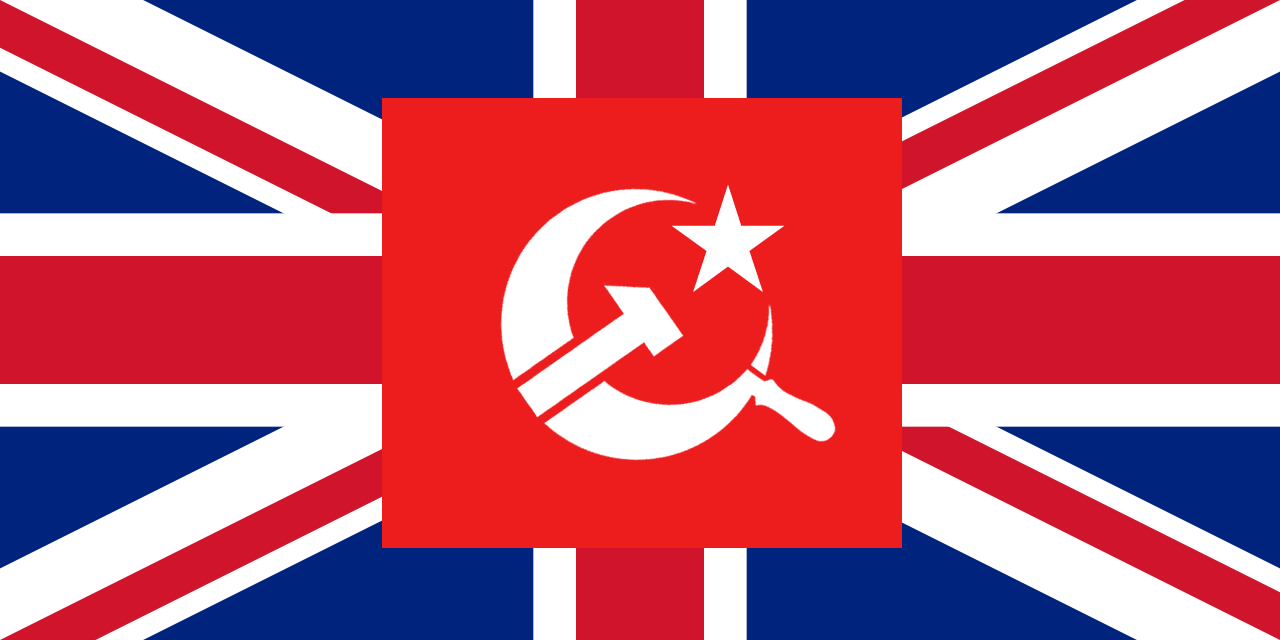 Political correctness has created two problems where the flood of Islam occurs. First it does not encourage immigrants to assimilate into the British culture. Secondly, it disallows citizens speaking against them even when bad behavior is occurring. Those who do will most certainly be destroyed publicly and even might receive jail time.

This situation has created an opportunity for Muslims to occupy entire neighborhoods whereby outsiders are not allowed and come under attack for entering.  These areas, often avoided by police officers, disregard the local laws and implement their own known as Sharia.

Regardless of the culture within which they live, they demand that those non-Muslims around them comply with their requests.  .  While most Muslims claim that they abide by the UK’s laws, Islamic extremists within the population consider Sharia to over ride the laws of the land.

Sharia law, by definition is in stark conflict with laws in the UK. Sharia essentially defines women as property with few rights. In addition, young women in more radicalized families run the risk of female genital mutilation (FGM), also known as female circumcision.

According to the Guardian, from 2014 through 2016 1337 cases of FGM have been reported to police agencies. But, the Crown Prosecution Service reports that only 36 have been referred to the court since 2010. Ironically, the country’s leftist politician base contains many extreme feminists, and yet instead of crying out about this, they accuse those who are alarmed by this of being “Islamaphobes” and publically castigate them.

More horrifying is that groups of Muslim male gangsters have for years maintained a sex-slave ring that the government itself has been complicit in covering up.

Since the flooding of the UK population by Muslims, crime rates have soared. Acid attacks, rapes, stabbings, robberies, and homicides have all sharply increased in recent years. The tiny island nation has also been rocked by several Islamic terror attacks. 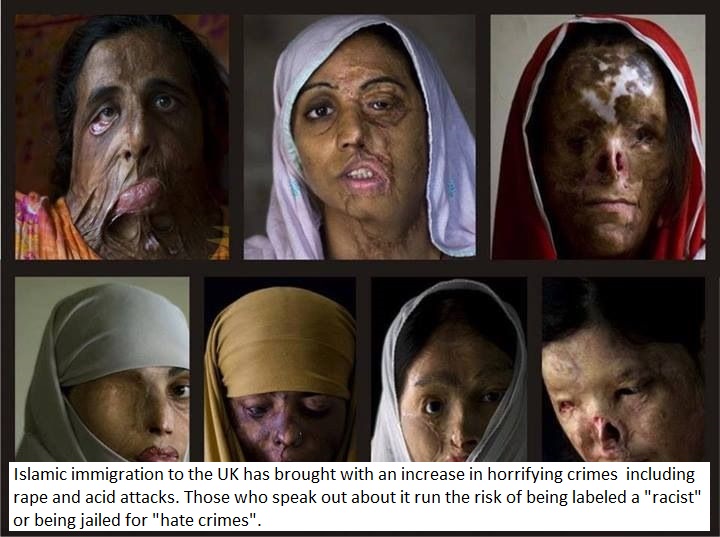 But, in spite of all of this information, the UK continues to allow the slow tyranny to overthrow the government.  The aforementioned Sadiq Kahn, a devout Muslim is the Mayor of London. He incites violence against conservative thinkers or those who support Donald Trump. He has gone as far as allowing a large balloon that disrespectfully portrays the President Trump to be flown in the city during his UK visit.

Kahn, with the assistance of the mainstream media, has created emotional outrage among the London citizenry by exploiting the minimally informed to take up the non-substantive issues. In other words, the Trump hysteria is largely a result of a disinformation campaign.

Freedom of speech is also being attacked on a daily basis in the once-free country.  Political correctness has created an atmosphere whereby anyone who wants to speak their mind must now do so underground for fear of being thrown in jail.

The Brits have created hate-speech laws that essentially state that one must not say anything against anyone that the state disagrees with or construes as “offensive”.

In March of this year, video creator, Mark Meecham trained his girlfriend’s dog to raise his paw NAZI style at certain anti-Semitic commands in order to make her dog look “not so cute” in a humorous effort to annoy her.  He made a video of it and it went viral. The Youtuber was fined over $1000 for the act, but originally faced jail time until the world weighed in on the matter. 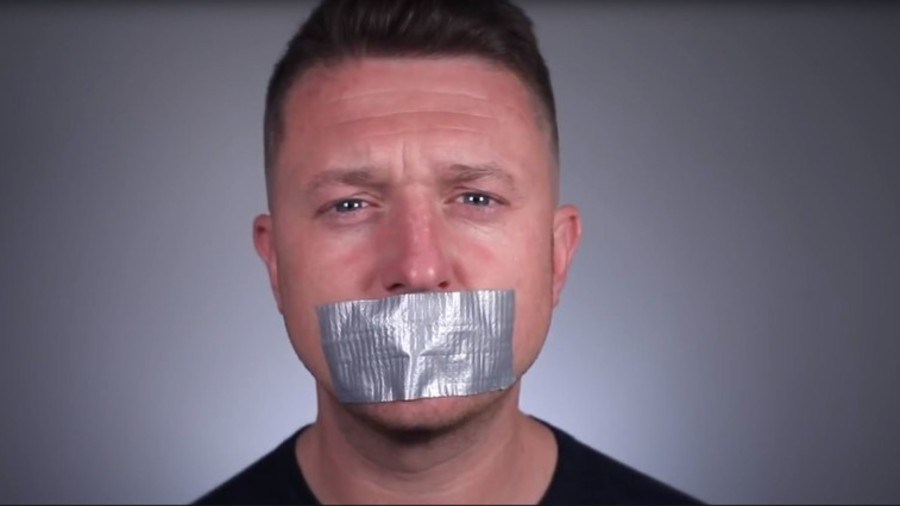 Robinson has been sent to jail on more than one occasion for covering court cases that involve grooming gangs. The last occurrence happened when he was covering a trial outside of the court house and off court property. This was an act that apparently violated his probation terms from a previous matter in which he was covering the same issue. Tommy Robinson was tried, convicted, and sentenced by Judge Geoffrey Marson.

In addition, the government prohibited all journalists from reporting on the trials and anything to do with Tommy Robinson. Shortly after being sentenced, the recently-appointed Home Office Secretary, Sajid Javid, a devout Muslim, personally had Robinson moved to a prison whereby 71 percent of the population is Muslim.

The media has worked tirelessly to portray Robinson as an anti-Muslim racist. Therefore, moving him to such a location necessarily means that his death is an intended outcome.

What is happening in the United Kingdom is not unique to the country. Most of the European union is exhibiting similar circumstances overall. They are taking in unvetted immigrants, falling prey to the language control that is political correctness, and essentially relinquishing liberty in general.  That these countries have the same issues occurring should come as no surprise to any critical observer.

Following World War II most of these countries were free states, but they became progressive and now have within each, that “formidable machine” that Winston Churchill spoke about. Indeed, they have decided to embark on the path of Socialism. And, as the wise Churchill also pointed out, would eventually result in exactly what they have become.