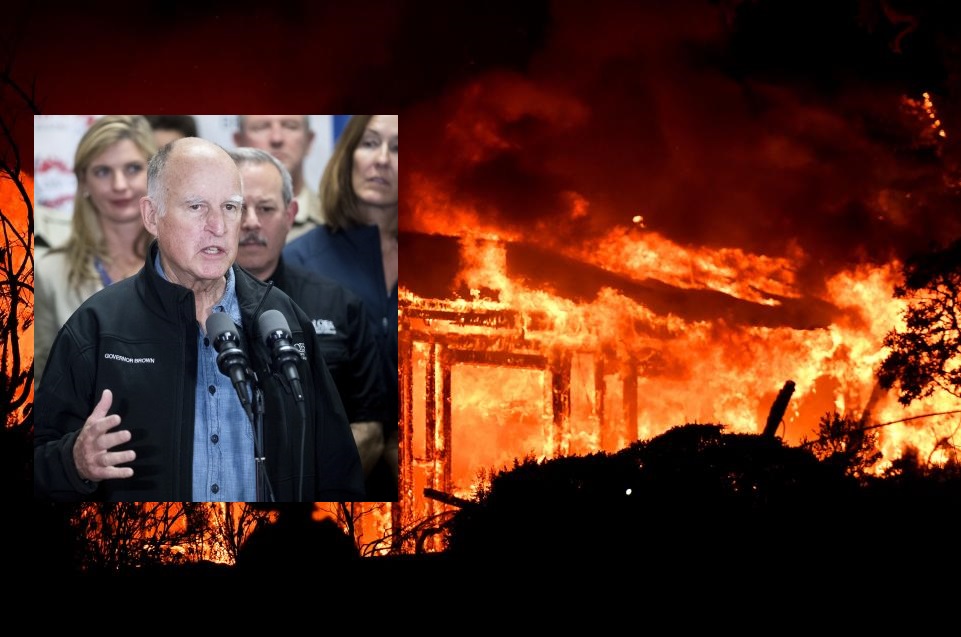 California governor Jerry Brown quickly seized on the opportunity to politicize the devastating fires that have destroyed property and ruined lives all over the southern region in that state.

At a Saturday news conference, Brown made the claim that climate change and drought mean a “new reality” in dealing with fires in the state.

However, this being an agenda, Brown did not make clear how earthquakes, a non climate issue, had anything to do with his statements. Acting like a “champion” to a cause, Jerry Brown has used this terrible chain of fires to continue efforts to destroy the state as a free society.

Also, in keeping with the narrative, Brown said on 60 Minutes, “Scientist are telling us, this is the kind of stuff that’s gonna happen.” As a typical leftist, Brown uses broad generalizations rather than quoting any real studies. The media being complicit, never vetted the information given by Brown, treating it as axiomatic.

Mentioning very little on the actual devastation in the fire-ravaged state, the heavily edited 60 Minutes video sought to further politicize the situation by attacking President Donald Trump. Bringing up the fact that Trump has referred to climate change as a “hoax” and chose to pull out of the Paris treaty, the interviewer solicited a response from the governor who answered in an emotional tirade.

“That’s a preposterous idea, not even a shred of truth in that statement!,” Jerry Brown exclaimed. “Now is not the time to undo what every country in the world is committed to!”

But the attack did not stop at the topic of climate change. The governor, a priesthood school drop-out continued by blasting the President’s relationship with God. “I don’t think President Trump has the fear of the Lord, the fear of the wrath of God, which leads one to more humility.”

This kind of behavior from a sitting governor is considered by many to be unprofessional. Moreover it is contradictive of biblical teachings that warn against judging others without the facts. According to scripture, Brown has no right as a Christian to judge the President’s “fear of God”.

1 Corinthians 2:11—For what man knoweth the things of a man, save the spirit of man which is in him? Even so the things of God knoweth no man, but the Spirit of God. In other words, only God knows what is in a man’s heart.

Tens of Thousands of people have been affected by close to 9000 fires of 2017 up to now. The most recent fires have burnt thousands of acres, wiped out entire ranches, and destroyed hundreds of homes. Thousands of lives have been ruined for both young and old.

Yet, the media and politicians like Jerry Brown, instead, have chosen to politicize the crisis in order to promote a false premise. The Governor who should be more concerned about the lives and livelihoods of his state’s citizens has shown both in the past and now, that his ideology is more important.

This is in stark contrast to the humanitarian behavior exhibited by the politicians of Texas, during the hurricane devastation that occurred there earlier this year. It seems that Brown is more interested in promoting a philosophy that consistently strips Californians of more and more freedom.