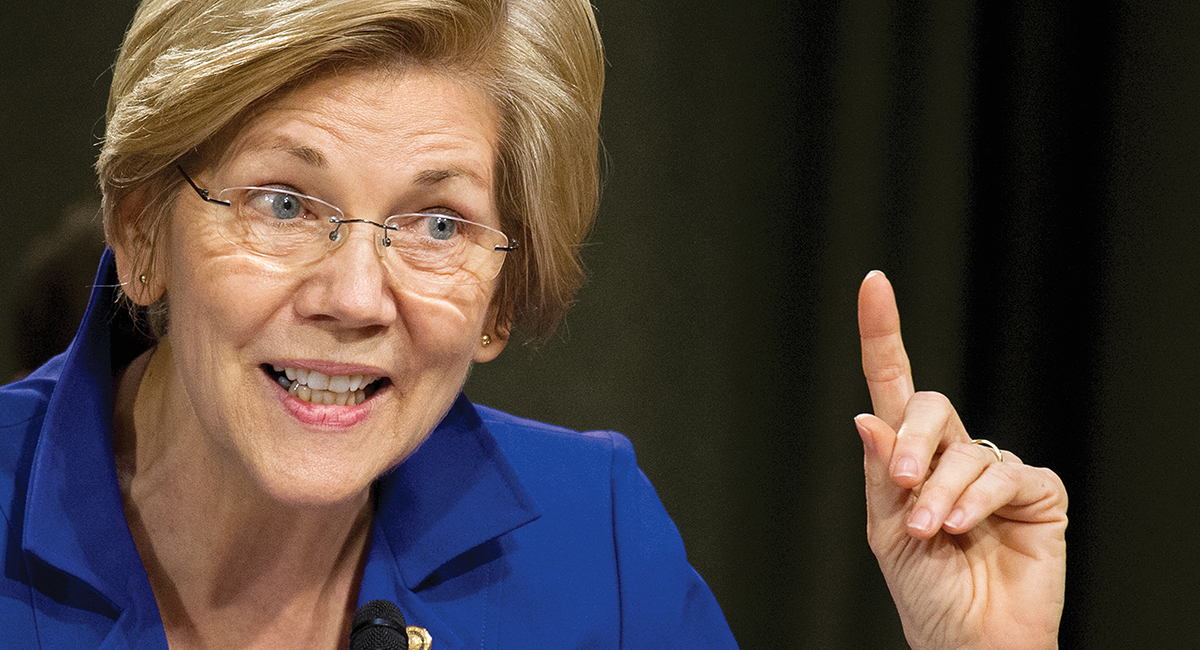 However, Warren sang a different tune in 2003. She and her daughter Amelia Warren Tyagi co-authored The Two-Income Trap, a widely lauded book on how women's entry into the labor force had precipitated a bidding war that eventually drove many middle-class families to bankruptcy.

In the book's sixth chapter, Warren discussed how modern families became able to acquire credit at such high interest rates. According to her, an obscure 1978 Supreme Court ruling permitted banks to "export" high interest rate ceilings from one state to another. For example, a bank based in South Dakota could charge a family in New York the first state's 24 percent maximum interest rate on a loan even though the maximum in New York State was just 12 percent.

This arrangement was good for the hosting state as well, allowing it to "attract clean, white-collar jobs, and even grab a share of corporate taxes in the process." The adverse impacts of high interest rates, meanwhile, "would be exported to the residents of other states, while the benefits—jobs and tax revenues—would stay local." Warren draws an explicit analogy between this arrangement and another legal system: America's drug laws.

"Suppose that South Dakota passed a law (and the federal government permitted it) that made it legal to grow marijuana inside the state and to sell it anywhere in the country. South Dakota would bear only a tiny fraction of the total social costs of marijuana use, while reaping 100 percent of the profits for sales elsewhere," Warren writes.

In 2016, voters in Massachusetts decided to make it legal to grow and sell marijuana in Warren's home state. Circa-2016 Warren, in fact, voted in favor of the ballot measure herself. Her view seems to have changed in 2015, when she said she was "open" to recreational marijuana legalization, and repeated the word "open" when asked about the initiative the year it was up for a vote.

Residents of Massachusetts still cannot sell marijuana over state lines, but that is because it remains a controlled substance under federal law. However, Warren would like to see that changed. Her own STATES act would not de-schedule marijuana, but it would remove federal oversight over states that have legalized marijuana. And Warren co-sponsored Sen. Cory Booker’s (D., N.J.) Marijuana Justice Act, which would legalize marijuana federally by removing it from the schedule of controlled substances.

Warren appeared on Morning Joe last year to discuss the STATES Act alongside co-sponsor Sen. Cory Gardner (R., Colo.). Asked if they agreed with the decisions in their respective states to legalize it, Gardner said he didn't, but Warren said, "I supported legalization of marijuana in Massachusetts."

"It's getting the job done for Massachusetts, it says we can protect what it is we voted for and we can build the kind of industry we want to build without interference from the federal government," Warren told CBS-Boston about the bill, which has stalled in Congress.

One person who might have disagreed? Elizabeth Warren in 2003, who warned explicitly against the social dangers associated with marijuana legalization.

When states can profit off of legal marijuana exporting, she wrote, "suddenly the downside of marijuana that once made legalization unthinkable—drug addiction, health problems, traffic accidents, and so forth—might start to look pretty significant next to all those dollars the state could rake in."

There is evidence to support all of Warren's claims. Although marijuana's physical addictiveness is contested, the National Institute of Drug Abuse asserts that heavy consumption can lead to problem use, marijuana use disorder, and habituation of the brain resulting in a drop in production of and sensitivity to biological endocannabinoid neurotransmitters. Research from the National Academy of Medicine has linked regular marijuana use to psychosis, schizophrenia, social anxiety, and depression (although the direction of the causality is unclear). And studies have indicated that states that legalize see an increase in traffic accidents.

With three in four Democrats supporting legalization, it is unlikely that Warren can get far as a candidate by making these arguments.

In fact, it seems that Warren herself may still actually be ambivalent about the idea—despite her full-throated support in public. She opposed a 2012 referendum to legalize recreational marijuana in Massachusetts (although supported the medical marijuana). She also drew criticism from the cannabis news site Marijuana Moment, when she claimed in an interview to have publicly endorsed the initiative before state voters approved it—MM labeled that false.