The Congressional hearing that the Daily Beast wrote about dealt with race and the problem of “white supremacy”.  Of the witnesses called, Candace Owens was the only person called by Republicans with three far-left white representatives, witnessing, almost in a religious tone, for the Democrat party.

The hearing consisted of typical rhetoric by academics, members of congress, and a leftist think-tank director. Most of it was a very one-sided claim that minorities needed to fear white supremacy as a major threat to them.  Ironically all three witnesses that made this claim happened to be white.

White supremacy has been the chosen narrative of the left and the leftist media, including the Daily Beast, since the election of Donald Trump. In lock-step with this narrative, the Beast earned its “virtue signal” trophy for the day but ignored a major contradiction to its proclaimed devotion to minorities by attempting to render a particular minority as irrelevant.

This obvious attempt to bully Owens has led some critiques to believe that the author of the story, Justin Baragona, may be sympathetic to the white supremacist movement along with other members of the Daily Beast staff. After all, those who subscribe to the leftist ideology claim to support minorities. Yet, in the case of Candace Owens and other black conservatives, the Daily Beast is attempting to silence minorities, making it clear that the real goal is to bully them into “knowing their place.”

Furthermore, having three white intellectuals testify on behalf of the party that claims to support minorities, doesn’t support the idea that Democrats see minorities—blacks in particular—as equals. In reality it appears that “supporting minorities” is more of an obligation to take care of those people that the Democrat party sees as “incapable” of making decisions for their own communities.

These contradictions can be put into context by understanding the root of the leftist thought process. Grandfather of the left, Karl Marx wrote “Accuse your enemy of what you are doing as you are doing it so as to create confusion.” For decades Democrats have kept blacks voting for them by blaming Republicans for the very racism they themselves practice.

During the hearing the leftist academics claimed that white supremacy was a major threat to America. Despite this proclamation neither of the three witnesses could provide any actual numerical data regarding deaths by white nationalists, a point by which Conservative commentator Candace Owens, took them to task.

Owens responded to this by stating “I find it quite hilarious that when asked for actual numbers, nobody here (two well-studied academics and a think-tank mouth-piece) could actually provide them because it’s not actually a problem in America.”

Owens pointed out several tangible cultural issues that contribute devastatingly to the black community. These issues included the high rate of single-parenthood in the black community, the disproportionate amount of black babies killed each year via abortion, high illiteracy rates among blacks, and the absence of God for daily life.

Owens boldly pointed out how Democrats preventing slaves of the past from learning to read is really no different than today where left wing party policy has virtually had the same impact. Recent figures show that only 17% of blacks can read at a 12th grade level. 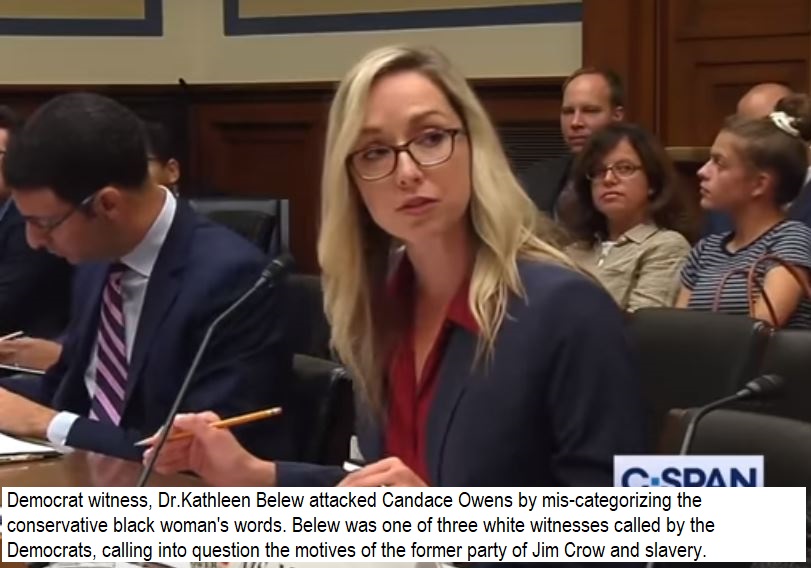 The Daily Beast article also disingenuously omitted that Candace Owens clearly stated that “white supremacy is real, just as racism is real.” Likely with intention, the Beast left out that Owens showed that it is a mechanism of the left to distract the public on the real issues that harm the black community—mainly those caused by failed Democrat policy.  She went on to say that white supremacy was essentially a fringe movement that would not make a list of the top 100 things that plague the black community.

One of the leftist professors, Dr. Kathleen Belew a research fellow for Advanced Studies of Behavior Studies at Stamford, attacked Owens by taking her out of context.  The so-called doctor attempted to frame Owens’ term “hilarious” as her reaction to white supremacy itself. Belew accused Owens of laughing at white supremacy and even went as far as to remind the panel that the Christ Church killer’s manifesto mentioned Owens’ name, even though a fictitious character and Nelson Mandela had also been listed on the same document.

Immediately following Belew’s attack on Owens, Rep. Jim Jordan (R-OH) pointed out that her statement was a mischaracterization of Owen’s words. “To have another witness to insinuate something that is not accurate is just not appropriate”, he said.

Jordan gave Candace Owens time to rebut Belew’s statement and speak more in depth on the real issues that affect the black population in America. Owens also used the time to expose the Democrat attempt to “make the 2020 election all about race” and Belew’s mischaracterization as an attempt to “make my words fit your narrative”.

Candace Owens finished up her time pointing out many of the ignored behaviors of the left and the Democrat party. Perhaps the most damning was her observation that the Democrat party brings out race fear-mongering every four years before an election in order to get the black vote. None of this was mentioned in author Justin Baragona’s story.

In fact, aside from his own attempt to mis-categorize the 30 year-old black conservative’s statements, the rest of the story seemed dedicated to other statements in Owens’ history that were, of course, taken out of context.

Given the contents of this Daily Beast story—an all-white panel against a single black woman during a congressional hearing, a leftist pseudo-news organization reporting with an obvious agenda against the same black woman, and an agenda that seeks to accuse a group’s adversaries of what they themselves are actually doing —it would seem that the appearance of real racism is undeniable.

While racism is very real, there are many examples where racial allegations are made solely for political gain. The irony is that real racism is often hidden among the ranks of those who do the accusing. And, often enough, those ranks happen to find themselves in the hierarchy of the Democrat Party.