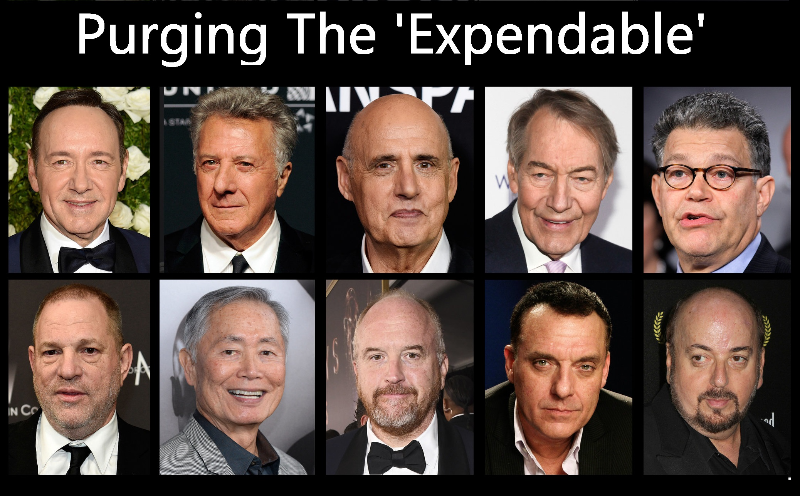 In recent weeks, the mainstream leftist establishment has engaged in a self-eating frenzy, purging many of its own lieutenants.

From the likes of Harvey Weinstein, media legend, Charlie Rose, and Senator Al Franken, the list of those who paid publically for accusations of sexual harassment is long.

The left has long held a contradictive narrative of “women’s rights” that only seemed to be wielded when that man who supposedly violated those “rights” was someone who disagreed publically with leftist ideas. By this standard there are only two of the recent countless accusations being leveled at these so-called molesters who are not leftist progressives thinkers.

Roy Moore and President Donald Trump have both received high-profile public accusations. Of the two, Moore, who lost the bid to replace the Alabama senate seat is the typical Republican that leftists go after in a frenzy to shut down with these types of allegations. However, it is likely that the inability of the media to destroy President Trump up to now is the cause for all of the other allegations.

That is to say that the “good progressive thinkers” that have come to make up the many males purged from the media, Hollywood, and the government were seen as expendable in the battle to take down Donald Trump.

Some see the onslaught of accusations of these men as nothing more than the militant feminist faction taking more control over the entire progressive establishment. It is true that feminists in general, have declared war on society, promoting hatred of certain males, creating issues where none existed before, and trying to confuse the public in general with new standards of gender identification.

But, it is more likely that this progressive male purge is a coordinated effort to prevent critics from arguing examples similar to Bill Clinton, Ted Kennedy, and many others who received a free pass from the feminists within their ranks.   In essence, if it weren’t for the need to destroy Donald Trump, the accusations may never have been leveled in the first place.

For decades the mainstream progressive types have worked with the assistance of the media to destroy anyone whose ideology disagreed with their own. The Clarence Thomas confirmation hearings in 1991 are a clear example of this. A known sexual harasser(and likely murderer), Senator Ted Kennedy sat on the committee that questioned Thomas. The same committee leaked false reports to the media, and smeared Thomas’ reputation. 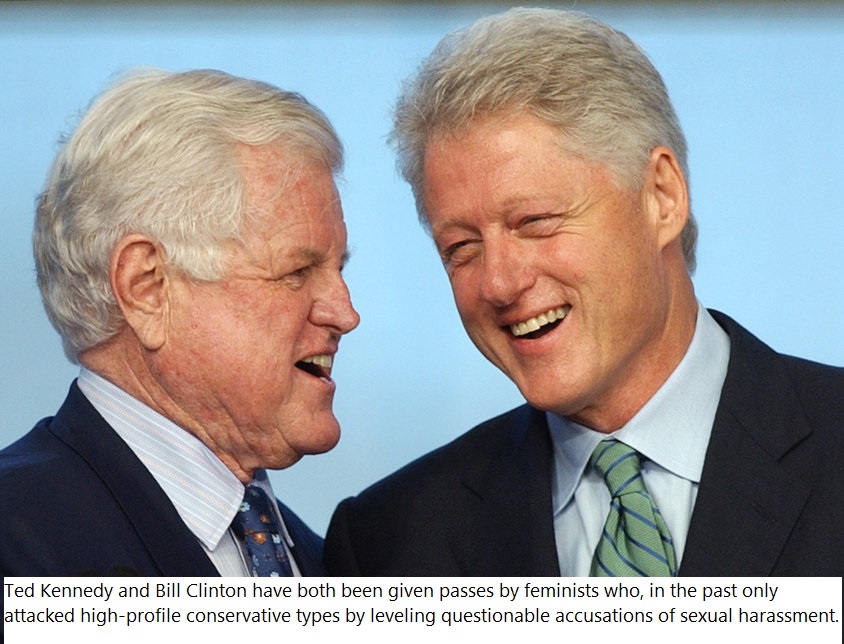 The contradiction of Ted Kennedy versus Justice Thomas is exactly what the deep-state media complex is trying to avoid moving forward, it seems. Whereas in the past, leftist Democrats were aided by the leftists in the media, they are now being lead by the media to create a frenzy in which Donald Trump becomes entangled and eventually ousted.

The mainstream media has mounted a continuous attack against the President that has never been witnessed in the history of the United States. While President Trump has emerged largely unscathed, it is likely that this whole ordeal is nothing more than another scheme in the never-ending assault by the media.

With so many allegations being made, it is almost impossible to discern the real from the false. The establishment heads of the mainstream media know this. For them, overwhelming the news cycle with so many new allegations only gives them more power to convince the viewers that “something needs to be done about this”. Many will be more than happy to help in the takedown of everyone being accused.

Sadly they know that perpetuation of this hysteria will cause lives to be destroyed with very few having the opportunity to prove themselves in a court of law, and fewer yet, the ability to regain their reputation in public.

As far as media figures like Joe Scarborough, Don Lemmon, or Wolf Blitzer are concerned, taking down the President and maintaining control of the narrative and ideology are much more important than preserving a free society where the accused are innocent until proven guilty.

In fact, their dangerous behavior seeks quite the opposite. Whoever the media complex says is guilty doesn’t deserve a trial, but should pay a price even if the accused may be innocent. Often many other lives are destroyed in the crossfire of its so-called reporting of staged “victims”. 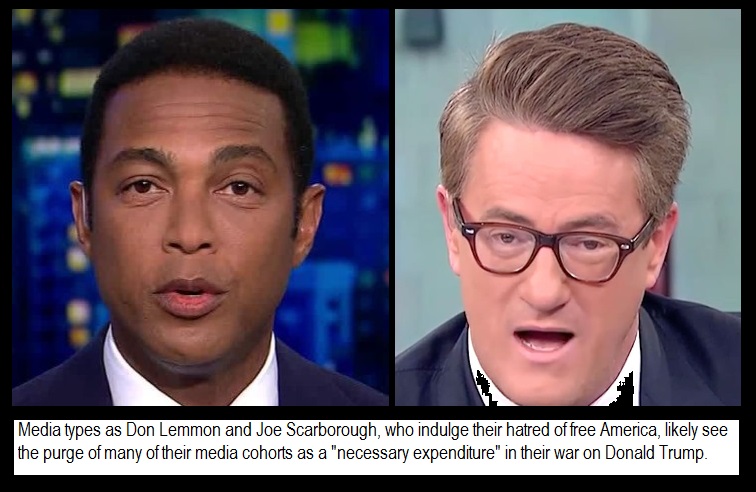 Another indication that the allegation storm is a fallacy is the presence of well-known activist and feminist attorney, Gloria Allred. Allred has a history of going after high-profile cases or circumstances for a chance to cash in financially or politically. She has also been used to help destroy political opponents with trumped up allegations that are never proven.

In 2012, presidential candidate, Herman Cain was accused of sexual harassment by mystery women who happened to come out from nowhere to make accusations. At the head of the accusations was Gloria Allred. Herman Cain was polling well as a potential for the Republican nomination until the Allred’s smear campaign which caused him to drop out of the race.

After dropping out, it was found that one Allred’s “accusers”, Sharon Bialek, had a questionable past with ties to the Obama administration, specifically campaign manager, David Axlerod. It was also found out that Bialek had never told a single person of allegations that had happened many years earlier.

Herman Cain was never tried in a court of law and no charges were ever filed. In fact, all the allegations simply disappeared along with Gloria Allred, once Cain dropped out of the race.

But, 2012 was not the only political campaign that fame-seeker appeared in. During the month before the general election in 2016, Gloria Allred made several appearances with other supposed accusers, including Jessica Drake, who claimed that Donald Trump hugged her tightly and kissed her.

More recently, Allred publically appeared with Beverly Young Nelson, who accused Alabama senate nominee, Roy Moore of sexual assault. Allred refused to submit evidence to Moore’s attorneys who questioned its authenticity, possibly violating the California State Bar. It was later found out that portions of the evidence had been forged by Nelson to appear to be from Moore. .

Gloria Allred is partnered with Brave New Films who released a video last month titled “16 Women and Donald Trump”.  An obvious cut-and paste endeavor, the video has several images and video clips, mostly from the 2016 presidential campaign. Not to be left out, feminist Allred makes an appearance in the film as an accompanying attorney, posing with one of the accusers over a year ago, prior to the election 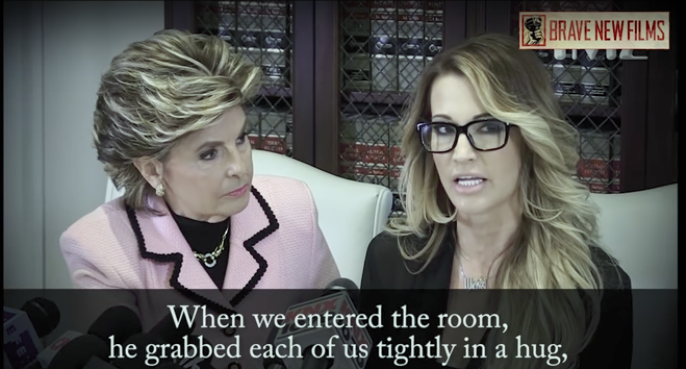 .The 16 Women and Donald Trump video as well as the site offers more evidence that the sexual assault meltdown is another premeditated attempt to take down Donald Trump. The video was posted to You Tube on November 15 of this year, a full month after the assault leftist feeding frenzy commenced; and almost a full month prior to renewed allegations leveled at the President.

Moreover, the Brave New Films is an extreme leftist activist organization that is against any and all points of view counter to its own. The organization’s web site is no more than a social justice media center that advances ideas that are counter to freedom and liberty.

A notice on the site reads “Please share this video to remind the nation that Hollywood isn’t the only place abuse happens and that our current president isn’t immune to being held accountable.” This call to action, being posted almost a full month prior to the renewed allegations against Trump, shows clear premeditation with mal intent.

All attempts by InternetDeputy.com to contact the offices of Gloria Allred and Brave New Films were met with defiance to answer any questions.

Feminist activism is tearing apart the fabric of several nations including the UK, France, Germany, and The United States. It has progressed far beyond the plight of women’s rights and into a movement that seeks to destroy men and restructure nations in general. The movement relies on accusations instead of fact, and emotions instead of empirical data.

Extreme feminism is used to silence the opposition in countries that have traditionally enjoyed freedom of speech. And, combined with the mainstream media, it is now attempting to topple the President of the United States who was elected in accordance to the laws of this country.

Feminism, traditionally being one of the contradictions in the leftist movement, has its own contradictions from within that call into question the validity of its motives and the values it promotes. For example, these feminist extremists claim women are unique and undervalued by men in society, but also say that gender doesn’t exist at birth. 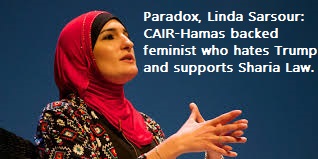 If, as they say, a man can call himself a woman or a woman can decide she is a man, then how is it possible that women are unique?

The very notion that feminism supports wo

men is laughable to critical thinkers who also see many successful conservative-libertarian type women, such as Sarah Palin or Ann Coulter, being publically castigated and even prevented from engaging in free speech by the movement’s activists.

In addition, the bizarre support for the hard line Islamic idea of Sharia Law by high-profile feminists as Linda Sarsour should also damage severely the “women’s rights” concept of the feminist movement. Sharia law, by nature maintains that women are no more than slave property to be controlled by males in society. In some cases, Sharia even prevents women from enjoying sex, relegating them to the status of a tool to be used for male sexual enjoyment only.

The Council of American Islam Relations (CAIR-Hamas), a terrorist front group that promotes Sharia, supports the feminist movement by teaming up with women like Sarsour. Together they intentionally mislead hundreds of thousands of feminist believers under the guise of “social justice”, down a path to their own destruction and loss of liberty.

In the endless news cycle it is unknown just how many accusers are real and how many are fake. However, the attempt to rehash allegations from the 2016 campaign is an indication that the deep-state media complex is getting desperate and will stop at nothing to take down the President. After all, many of these allegations were discredited more than a year ago, having little to no impact on the election process as intended. 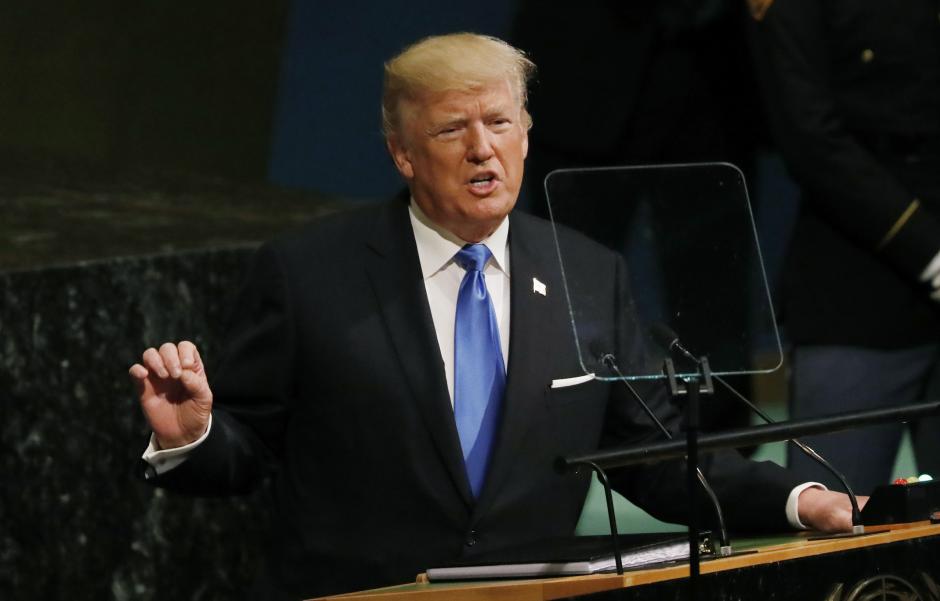 False Russian Collusion stories, continuous attacks against Trump on all fronts, and now repackaged questionable allegations of sexual harassment, are more about chipping away at a President’s reputation in order to increase the chances of impeachment later on.

Even with the election defeat of Roy Moore looming in the background, it is highly likely that this will, once it blows over, have little impact on the current status of President Trump. Those who voted for Donald Trump seem to be relatively unaffected in their ability to identify and call out the media for its use of fake news in order to promote a narrative.

There are two very different Americas inside the United States. Not to be fooled, one side seeks to preserve freedom and liberty as intended by the founders. The other seeks to use social issues to rally the uninformed to causes with the

underlying motive to steal the liberty and force all citizens to live under the control of elites.

The misleading actions of leftists and the deep-state media complex have and will continue to test the strength and resolve of the informed, who see what is happening around them. To them, this is not only an attack on the President they put in office, but more importantly an attack on the freedoms they so desire to maintain.