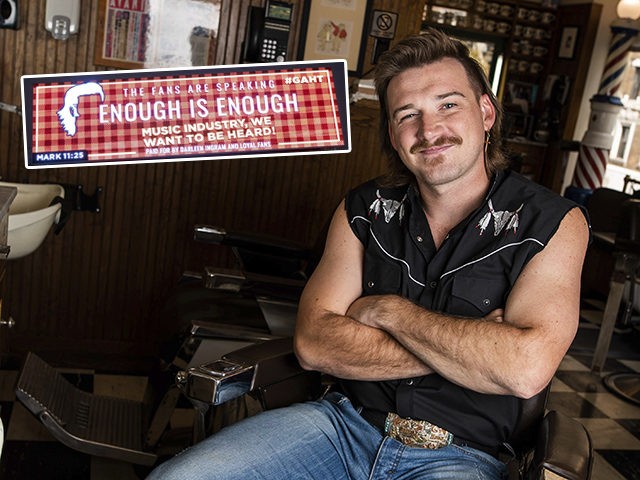 Fans of country singer Morgan Wallen are protesting his industry blacklisting ahead of the annual CMT Music Awards by putting up billboards across Nashville demanding an end to his punishment.

“The fans are speaking. Enough is enough,” the billboards read.

Morgan Wallen became an outcast to much of the country music industry after he was heard using the n-word in leaked audio in February. The CMT Awards, which take place next week in Nashville, ruled Morgan Wallen ineligible for individual artist categories though he was still technically eligible in group categories, like music video or album of the year.

The ViacomCBS-owned CMT announced it was removing Wallen’s appearances from all of its platforms. Wallen was banned from the Billboard Music Awards and suspended by his record label, Big Loud. Talent agency WME also dropped Wallen as a client.

In recent days, fans have reportedly put up seven digital billboards across Nashville saying, “Music industry, we want to be heard!” The billboards also feature the singer’s catchphrase “Gaht” and a reference to the New Testament verse Mark 11:25.

“And when ye stand praying, forgive, if ye have ought against any: that your Father also which is in heaven may forgive you your trespasses.”

Here’s one of the billboards in Nashville done by fans in support of country music artist Morgan Wallen. pic.twitter.com/PuJwoEYpHU

As Breitbart News reported, Wallen, 28,  has apologized for his use of the n-word.

“I’m embarrassed and sorry. I used an unacceptable and inappropriate racial slur that I wish I could take back. There are no excuses to use this type of language, ever. I want to sincerely apologize for using the word. I promise to do better,” he said in a statement.

Despite his pariah status within the industry, Wallen’s latest album, Dangerous: The Double Album, has been a hit with fans, who sent it to the No. 1 spot on the Billboard 200 chart.

The same corporate media forces that swiftly canceled Wallen have yet to weigh in on Hunter Biden, son of President Joe Biden, using the same slur in almost the exact same way.

Follow David Ng on Twitter @HeyItsDavidNg. Have a tip? Contact me at This email address is being protected from spambots. You need JavaScript enabled to view it.