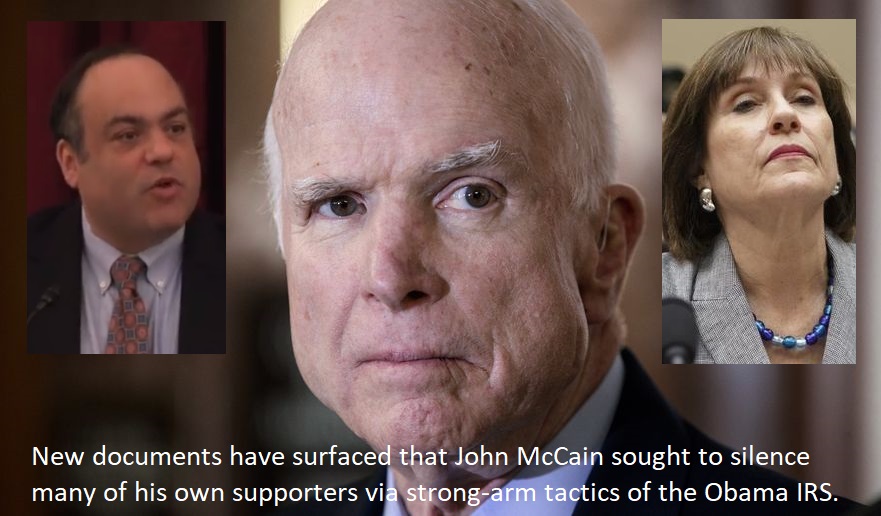 The Lois Lerner scandal of 2013 has just resurfaced, but this time, with hard evidence that John McCain’s was part of it.

Henry Kerner, then-staff director and chief counsel on the Senate Homeland Security Permanent Subcommittee told Lois Lerner that “the solution is to audit so many that it becomes financially ruinous.”

The documents cover a meeting that took place between Kerner, Lerner, and other high ranking IRS officials to address concerns by Sen. John McCain (R-AZ) and Sen. Carl Levin (D-MI), who wanted to know why the IRS was not reining in political advocacy groups.

The Supreme Court’s Citizen’s United decision had just overturned portions of the McCain-Feingold Act—one of John McCain’s career-defining pieces of legislation. McCain having characterized the decision as “one of the worst I have ever seen”, it is apparent that the meeting was held to retaliate against conservative-libertarian groups who the senator viewed as abusive.

This meeting, which was recorded by IRS employees, took place on April 30, 2013. This was only ten days before the former IRS director of exempt organizations, Lois Lerner admitted to deliberately hampering the application process of conservative not-for-profit groups.

The meeting notes reveal that Kerner’s many questions of Lerner and her colleagues were focused on ways to go after and penalize right-wing nonprofit groups. This exchange of information lead Kerner to conclude that, “maybe the solution is to audit so many [groups], that it is financially ruinous.”

In other words, John McCain’s staff director wanted to audit groups like Citizens United in order to shut down political dissent.

This very incident had been reported previously by Judicial Watch to which Senator McCain released a press statement in rebuttal back in 2015. Though, back then he called it a “false report,” these new unedited documents obtained by the watchdog group via the Freedom of Information Act (FOIA) prove otherwise.

John McCain, had after all, taken the trouble to create a 37-page dissenting report which essentially documented and lambasted the IRS for its own treatment of conservative groups.

This necessarily means that the senior senator engaged in double-speak. While position-shifting is nothing new in his long career as a public servant, this is one time when it can certainly not be disputed or explained away.

Sadly this information comes at a time when John McCain is in the twilight of his life. But, regardless of how untimely it may be, the truth has a place in history. And, as it comes to light, it must be reported no matter who is involved and how inconvenient it is.

If it were to be withheld for ANY reason, it would only strengthen the resolve of those who seek to undermine the very society for which they claim to “stand”.