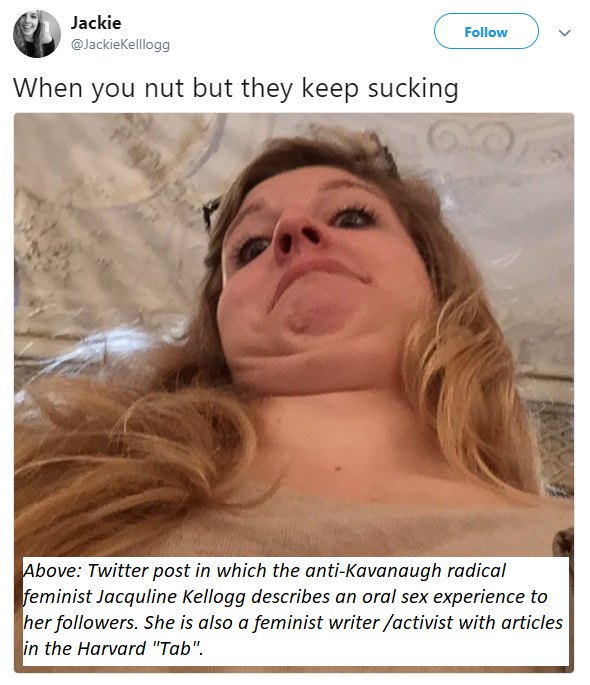 Perhaps the most egregious of behavior from the law school was started by student feminist Jacqueline L. Kellogg.  Kellogg, who also uses the name “Jackie”, filed a complaint known as a “Title IX” against Kavanaugh with the University’s Office for Dispute Resolution (ODR).  A Title IX is a sexual harassment complaint process at the Harverd administration. Proud of her own idea, she emailed many others to do the same and was able to get at least 48 to file ODR complaints with the University.

According to the Harvard Crimson, Julia B. Wiener, another radical feminist, signed a petition and filed a ODR complaint against Kavanaugh along with Kellogg. Both women claimed that the presence of the Supreme Court Nominee would represent a “hostile environment” as defined by the so-called Ivy-league school’s position on sexual harassment.

Assuming the role of psychologists the radical feminist duo made the assumption that people who have been victims of sexual harassment would be negatively affected if they had to be around Kavanaugh on campus.

Moore went on to describe The President as “strong and focused as I have ever seen him. It was as if he was entirely above the fray.”

Two law professors of the Harvard Law School Jeannie Suk Gersen and Janet Halley weighed in on the matter regarding the complaints filed.  While they did not indicate their feelings regarding fellow professor Kavanaugh, they warned that the frivolous use of Title IX complaints would undermine the seriousness of the process.

Judge Kavanaugh was not fired from the school, but quit on his own, thus rendering the complaints against him as invalid as they will not come up for review. 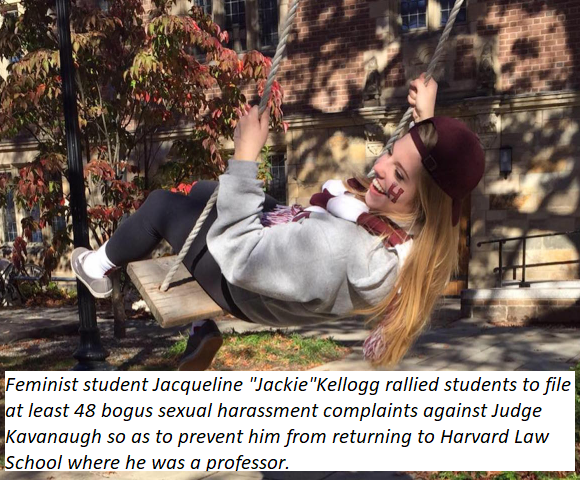 In the meantime, the radical feminist faction on the Harvard campus continues to act more and more out of control. This has caused some to wonder what kind of behavior the school is willing to allow and, moreover even how it can seriously teach law with so many on its campus protesting it.

A look at an article by Jacqueline Kellogg reveals her social justice mindset as well as what is being taught to many like her in the institution. She talks of the need to continue to study so that she can take on the “systemic” problems of the world.

In the same article titled “A Need For Focus”, she wrote of how her professor, following the 2016 election of Donald Trump, urged the class to understand the importance of education and how it will “play a vital role in challenging the poisonous ideologies at play in America.”