While the telling report released come as no surprise to critics, Google’s response to the Breitbart piece shows the   company’s blatant willingness to ignore the truth and lie to the American people and the world.

Following the release of the damaging video, Google replied to Breitbart’s request for comment with the following statement:

“At a regularly scheduled all hands meeting, some Google employees and executives expressed their own personal views in the aftermath of a long and divisive election season. For over 20 years, everyone at Google has been able to freely express their opinions at these meetings. Nothing was said at that meeting, or any other meeting, to suggest that any political bias ever influences the way we build or operate our products. To the contrary, our products are built for everyone, and we design them with extraordinary care to be a trustworthy source of information for everyone, without regard to political viewpoint.”

The statement literally doubled-down Google’s commitment to misleading the public. The claim that the company allows employees to express their opinions is outright false. In addition their assertion that nothing was said to suggest political bias is laughable since the entire hour-long video was dedicated to just that.

In August of last year a former Google engineer, James Damore was fired for circulating an internal company memo which expressed his opinion on the company’s hiring practices and treatment of employees based on gender. The document was a well-written piece with scientific references that showed how the company was overtly discriminating against white and Asian males based on misconceptions. 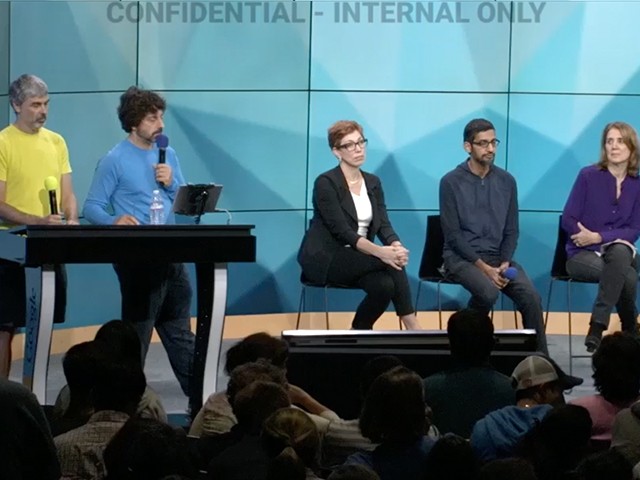 James Damore submitted the appropriately titled “Google’s Ideological Echo Chamber” memo precisely because he thought that he was allowed to express his opinions as the company had encouraged. Instead he was not only fired, but publicly shamed by CEO Sundar Pichai, in spite of Google’s own human resources department previously agreeing with the memo.

Damore is part of a class-action lawsuit against Google which he alleges the company discriminates against white men and conservative thinkers. The former internet engineer turned over damaging evidence which shows discrimination by Google-YouTube, who publicly shames, blacklists, punishes those whose opinions do not coincide with that of the internet giant.

But, perhaps the most bold statement that Google made in its reply to Breitbart was that the company doesn’t allow its political bias to manifest itself in its products, which the company says is “designed for everyone.”

It has long been known that Google’s products are driven to silence the voices of conservatives the world over. Every day the company skews its search engine results to favor leftist reporting and principles.  Its Google Analytics tool, that advertisers often use in making marketing decisions, hides actual traffic of conservative-based websites.

The real web traffic of Internet Deputy, for example showed more than 150,000 hits for the month of August,2018.  Yet, Google Analytics only showed 8,000. According to its owner, the site has been completely gone through to ensure that there is no mechanism causing it to show inaccurate numbers. All attempts to contact Google on this matter were met with refusal by the company to respond.

The above video has been embedded for the readers to watch. Although an hour long, it is encourage that it is watched in its entirety.

Breitbart identified important points in the video to pay particular attention to:

(00:00:00 – 00:01:12) Google co-founder Sergey Brin states that the weekly meeting is “probably not the most joyous we’ve had” and that “most people here are pretty upset and pretty sad.”

(00:00:24) Brin contrasts the disappointment of Trump’s election with his excitement at the legalization of cannabis in California, triggering laughs and applause from the audience of Google employees.

(00:01:12) Returning to seriousness, Brin says he is “deeply offen[ded]” by the election of Trump, and that the election “conflicts with many of [Google’s] values.”

(00:09:10) Trying to explain the motivations of Trump supporters, Senior VP for Global Affairs, Kent Walker concludes: “fear, not just in the United States, but around the world is fueling concerns, xenophobia, hatred, and a desire for answers that may or may not be there.”

(00:09:35) Walker goes on to describe the Trump phenomenon as a sign of “tribalism that’s self-destructive [in] the long-term.”

(00:09:55) Striking an optimistic tone, Walker assures Google employees that despite the election, “history is on our side” and that the “moral arc of history bends towards progress.”

(00:10:45) Walker approvingly quotes former Italian Prime Minister Matteo Renzi’s comparison between “the world of the wall” with its “isolation and defensiveness” and the “world of the square, the piazza, the marketplace, where people come together into a community and enrich each other’s lives.”

(00:13:10) CFO Ruth Porat appears to break down in tears when discussing the election result.

(00:15:20) Porat promises that Google will “use the great strength and resources and reach we have to continue to advance really important values.”

(00:16:50) Stating “we all need a hug,” she then instructs the audience of Google employees to hug the person closest to them.

(00:20:24) Eileen Naughton, VP of People Operations, promises that Google’s policy team in DC is “all over” the immigration issue and that the company will “keep a close watch on it.”

(00:21:26) Naughton jokes about Google employees asking, ‘Can I move to Canada?’ after the election. She goes on to seriously discuss the options available to Google employees who wish to leave the country.

(00:23:12) Naughton does acknowledge “diversity of opinion and political persuasion” and notes that she has heard from conservative Google employees who say they “haven’t felt entirely comfortable revealing who [they] are.” and urged “tolerance.” (Several months later, the company would fire James Damore allegedly for disagreeing with progressive narratives.)

(00:27:00) Responding to a question about “filter bubbles,” Sundar Pichai promises to work towards “correcting” Google’s role in them

(00:34:40) Brin compares Trump voters to “extremists,” arguing for a correlation between the economic background of Trump supporters and the kinds of voters who back extremist movements. Brin says that “voting is not a rational act” and that not all of Trump’s support can be attributed to “income disparity.” He suggests that Trump voters might have been motivated by boredom rather than legitimate concerns.

(00:49:10) An employee asks if Google is willing to “invest in grassroots, hyper-local efforts to bring tools and services and understanding of Google products and knowledge” so that people can “make informed decisions that are best for themselves.” Pichai’s response: Google will ensure its “educational products” reach “segments of the population [they] are not [currently] fully reaching.”

(00:54:33) An employee asks what Google is going to do about “misinformation” and “fake news” shared by “low-information voters.” Pichai responds by stating that “investments in machine learning and AI” are a “big opportunity” to fix the problem.

(00:56:12) Responding to an audience member, Walker says Google must ensure the rise of populism doesn’t turn into “a world war or something catastrophic … and instead is a blip, a hiccup.”

(01:01:15) A Google employee states: “speaking to white men, there’s an opportunity for you right now to understand your privilege” and urges employees to “go through the bias-busting training, read about privilege, read about the real history of oppression in our country.” He urges employees to “discuss the issues you are passionate about during Thanksgiving dinner and don’t back down and laugh it off when you hear the voice of oppression speak through metaphors.” Every executive on stage – the CEO, CFO, two VPs and the two Co-founders – applaud the employee.

(01:01:57) An audience member asks if the executives see “anything positive from this election result.” The audience of Google employees, and the executives on stage, burst into laughter. “Boy, that’s a really tough one right now” says Brin.