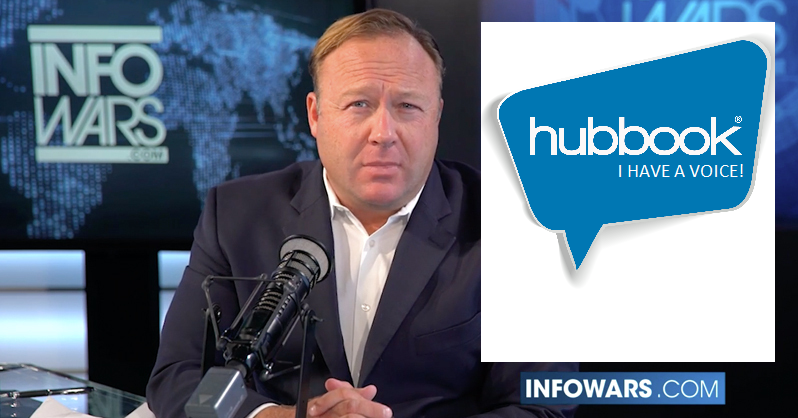 The offer, which Jake Fogg, the site’s General Manager made to Jones’, comes as Facebook has banned most of the controversial figure’s material.  Fogg, a free speech activist says that while he doesn’t agree with everything that Alex Jones says, he should be allowed to share his views.

“I have two problems with how this is being handled”, said Fogg. First of all I have reviewed his content and it is nothing remotely resembling how the media portrays him. Secondly, I want to know why Facebook, itunes, and YouTube can ban InfoWars but not Antifa, Black Lives Matters, The Black Panthers, Yvette Felarca, and other organizations that spew hate?”

He went on to point out that Jones doesn’t call for the complete extermination of an entire race of people the way that many of Black Lives Matter and the Black Panthers do.

But, Hubbook’s general manager warned that people should be careful how this entire case of censorship is handled. “This is a free speech issue, but NOT a First Amendment Issue”, he said.  Facebook, Google-YouTube, Twitter, and itunes are all private companies. They have the right to decide the content that is shared on their platforms.”

“We need people to understand that this is not a reason to call for government intervention!”, he exclaimed.  “This is what they want! See, if people force a company like Facebook to comply with anything, then it could become a utility and that is bad for us[Hubbook]. It would ultimately limit the amount of social media networks that people could choose from.”

Hubbook is a newer, upcoming network that was founded in response to the millions of people who see their content being censored on major platforms.  Jake Fogg and the CEO of Hubbook wanted to give people a new choice.

“You see that Twitter considers someone who has an American Flag on their page as a terrorist or white supremacist, or that Facebook blocks a post that defends personal liberty, and you can’t let that stuff slide,” explained Fogg. “In a way we want to see more of this censorship, to be honest.  The social media giants want you to think that they are the only ones to choose from and that you must think like them in order to be on them.  The only way to show people that there are alternatives is to provide some and that is what we have done.”

In a letter to Jones, Fogg offered the platform to be used by the Infowars team free of charge, just as any other user. In the letter, he also promised that Hubbook would not engage in algorithmic regulation of content. In other words, whatever a user chooses to see is what he or she will see.

As Fogg explained it, “If you friend people or join groups and pages, you will see posts from those people and those groups at the time they are made, plain and simple.” Currently all of the major social media companies use algorithms to decide what users see.  Many users have, for example, noticed that they only see posts from about a dozen people or groups on a regular basis when they often have joined hundreds of groups and have thousands of friends.

Another promise the new network promises is that personal data will not be sold and no there will be no tracking of personal habits. The company also promise to always be privately owned and never go public, as in the case of both Twitter and Facebook.

“We believe that with enough users that we can support the platform through ad content based on that alone. We are not in this to make money, but to provide an alternative platform for users”, said Fogg of the site. “Early on we decided that advertising sales is a great way to keep us viable rather than trying to rely on donations or any other funding.”

More News: Alex Jones Removed By Facebook, But NOT Antifa or…

Hubbook has a mission/vision statement that addresses the issues that plague the social media giants:

Social media was originally intended to provide a place where people could essentially connect with their friends, family, coworkers, etc. But these new networks provided something even more valuable and completely unforeseen. They gave people a voice in the world.

During a time when broadcasting and news creation was restricted to the very few, social media gave people a place to share information, ideas, and opinions with people all over the world.

But the explosion of social media has brought with it, unintended consequences. Facebook, Twitter, Amazon,and Google-Youtube, virtually control the entire internet and to some extent the users of these platforms. They violate your privacy, track your habits, and collect and sell your personal data.

Hubbook is the new alternative to once again restore your voice in the world. Hubbook is committed to giving you a place to share your ideas with the world. Whether you are high profile with a million followers or just getting into the game, Hubbook will gladly give you a platform with the following in mind:

Get on Hubbook, get connected, and get your voice back!

A copy of this statement was also sent to Jones and Fogg hopes to attract him. Any relation with Jones would be symbiotic. Jones has a hugeloyal  followership that would likely move to Hubbook and Hubbook would be providing Jones with the opportunity to get in on the ground floor and speak his voice.