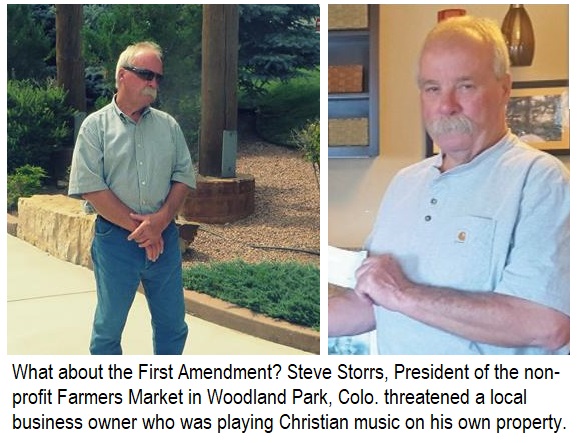 Farmer’s Market, bullied a musician for playing Christian music on the adjacent property.  At approximately 11:30 AM, Steve Storrss stormed over to the My Nutra hemp and nutraceutical company lot while yelling at the elderly guitar-playing singer, demanding that he turn his music off.

Immediately thereafter he approached a booth that the company operated every Friday to coincide with the Farmers Market. Storrs then rudely asked employee, Karen Little, if the company allowed the man to play on the property.

She told him that the owner did indeed allow the man to play his mix of oldies and gospel music, to which Storrs said that he could not.

Storrs responded, “I hope you don’t mind me being direct, but I am an atheist and I don’t want to hear that Christian sh*t!”

“But, he is just a nice old guy, I don’t see the problem”, replied Morehouse.

Steve Storrs made it clear that he didn’t care anything about the man or his right to sing while on private property.  He then went on to accuse Morehouse’s company of taking advantage of Farmers Market by placing a booth out on Fridays, the day of the week that the market is open, in order to capitalize on the market environment.

But, the My Nutra owner states that, while his company does most of its business online, the Farmers Market blocks his terrestrial customers from driving to his property.   As a result he is forced to blend in with his neighbors by setting up a sales booth on his own property in order to attract pedestrians, or alert customers who might well drive past.

“I have never complained about being blocked in because of the Farmers Market”, said Morehouse in a statement to Internet Deputy. “I just try to fit in and make the most of it. I even told the guy[Storrs] that I was friends with every one of the people selling goods at his open-air market.”

Following Storrs’ rant about the My Nutra booth, Brad Morehouse stated, “You’re a Democrat aren’t you? I am a Republican and I don’t know a single Republican who is as intolerant as you. You can’t tell me what I can do on my own property.”

Directly after Steve Storrs appeared to be extremely angry and then raised his fist as to strike Morehouse.  At that point, Morehouse told Storrs, “The first person who loses his temper, loses the game.”

Storsr dropped his fist and asked in a sarcastic tone, ”What, are you some kind of f*cking philosopher?”, and then he quickly walked away.

The elderly guitar player known as Ray was intimidated. He plays an acoustic guitar and sings into a microphone that is attached to a six-inch, low volume, battery operated amplifier. After being accosted by the president of the Farmers Market, he continued to play, but sang softly to the point that it could barely be heard only a few feet away.

The Teller County Farmers Market is a 501 (c)(3) nonprofit organization which allows farmers to sell their products directly to the consumers every Friday in the small town. While this is mostly an open-air market, there is usually a Democrat registration booth present. While it is known that most of the Farmers Market board members are also Democrat, it is unclear if Steve Storrs or his board have prevented the presence of a Republican registration booth approved to be there as well.

The IRS web site states that the organization’s nonprofit status requires it to not take part in any campaign activity for or against political candidates and it must not be organized or operated for the benefit of private interests.

In other words, the open-air market cannot disallow a Republican booth. Nor can Steve Storrs indulge in discrimination of Christians or infringe on their First Amendment rights while he operates the non-profit organization.

The community of Woodland Park is located in a county where the Republican base outnumbers that of the Democrats by nearly three-to-one. Such a heavy density of conservative voters suggests yet a greater number of Christians.

While small conservative communities are generally forgiving, it is difficult to estimate the level to which this particular borough could protest. Generally this type of population is less likely to do so loudly, preferring instead to exercise their freedom to boycott the Farmers Market and anything else affiliated with Mr. Storrs.