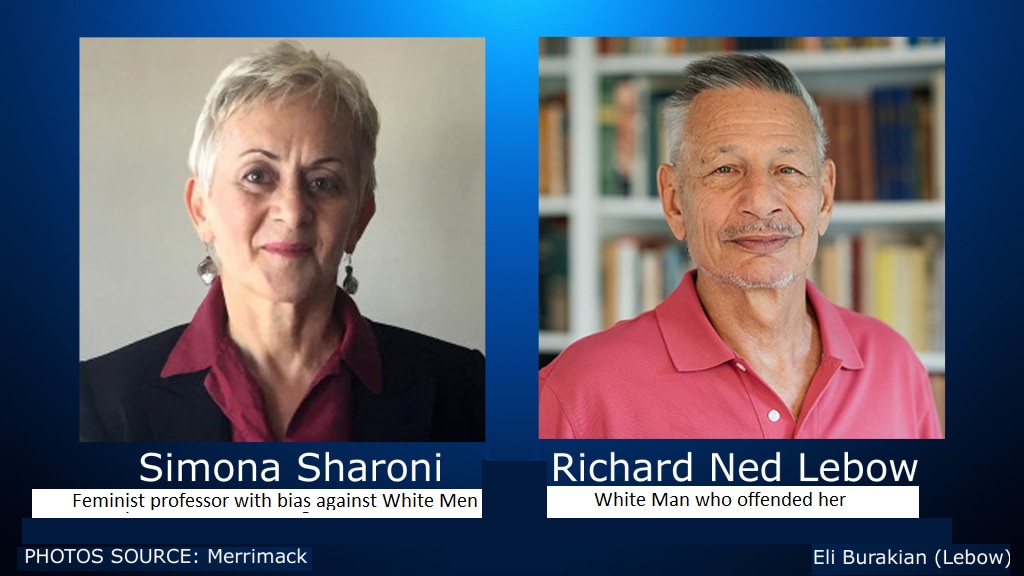 In a hotel, at a convention in San Francisco, an unsuspecting white male professor entered the “Ministry of Truth” when he boarded a crowded elevator.

What he also didn’t know was that the head informant of the thought police was on that very elevator.

According to a report by leftist site Chronicle.com, Richard Ned Lebow, a political theory professor at King’s College in London made a simple joke that would eventually make national news for offending a feminist colleague.

When the feminist offered to press the elevator buttons for the people in the elevator, Lebow responded with “ladies lingerie”, a joke reminiscent of the 1950s department store era. Both professors were attending the same convention of the International Studies Association (ISA) early last month in San Francisco, CA.

Shortly thereafter, the triggered feminist, Simona Sharoni – a women’s and gender studies professor at Merrimack College, reported the joke to ISA executive director, Mark Boyer. According to her, she never said a word to Lebow about the matter at the time, but simply made note of his name.

In typical leftist academic style, Boyer then had a meeting with the ISA Committee on Professional Rights and Responsibilities, which determined that the simple joke had violated the code of conduct of the organization.

An opinion piece in the social justice publication, Washington Post ,which first reported this incident, detailed that after his awareness to the complaint, Lebow sent the feminist extremist Sharoni an email that stated, “I certainly had no desire to insult women or make you feel uncomfortable. Like you, I am strongly opposed to the exploitation, coercion or humiliation of women.”

His email continued, “As such evils continue, it seems to me to make sense to direct our attention to real offenses, not those that are imagined or marginal. By making a complaint to ISA that I consider frivolous—and I expect, will be judged this way by the ethics committee—you may be directing time and effort away from the real offenses that trouble us both.”

By “real” offenses, Lebow may have been referring to the horrors perpetrated against women in Shari-Law abiding nations—an idea that ironically seems to be ignored by the feminist community in general. But, in spite of his attempt to resolve the matter via communication between two adults, the ISA continued to push the matter requiring the 76 year-old professor to write an “unequivocal apology” to Simona Sharoni by May 15th of this year.

In fact Mark Boyer attacked the professor for even trying to resolve the matter between colleagues saying that it was a “more serious violation” (than the elevator remark)”that you chose to reach out to Prof. Sharon and termed her complaint ‘frivolous.’”

Not only did Boyer require an apology, he demanded that it be written in a certain way. The written form must, according to instruction, not focus on Sharoni’s failed perceptions, but on Lebow’s actions. It was also noted that if he failed to comply, the executive committee would consider appropriate sanctions.

Professor Richard Ned Lebow refused to apologize and emailed colleagues, telling them that his treatment was a “horrifying and chilling example of political correctness”. He also stated that it “encourages other to censor their remarks for fear of retribution.”

Questions have surfaced as to the motives of the feminist extremist Sharoni due to differences in stories between the two parties. Lebow insists that the person operating the elevator buttons was a male and not the feminist professor.

In addition, her account stated the “his buddies” chuckled at his joke at the time and that he was smiling when he made the joke. Both claims are disputed by Lebow who said in an email to the Chronical they were not his friends and that Sharoni would have not been able to even see him as he was in the back of the elevator and she was in the front with her back to him.

Sharoni’s response simply doubled-down on her triggered demeanor which prevented her from resolving the matter as an adult between colleagues. In an email, she told the Chronicle that the real chilling effect will be against people who experience and report sexual harassment. But her email  also revealed her bias against white men.

“For decades, women and other marginalized groups in the academy had to put up with white men who decided what counts as a violation and what is ‘frivolous’”, she wrote.  As such, her bias against white men means that even a person who means no harm by a simple remark that a woman could misconstrue, should be silenced and punished.

In other words, it is quite possible that if Lebow had been a black man, she would have not been triggered and the entire incident would have gone unnoticed and not reported to the ISA.  In addition to the backlash received by Sharoni from outside the academic community, it is possible that white male professors may avoid being in her presence in the future.

It is also unclear how deep her bias goes in regard to the white male students who must endure her bias in her classroom.