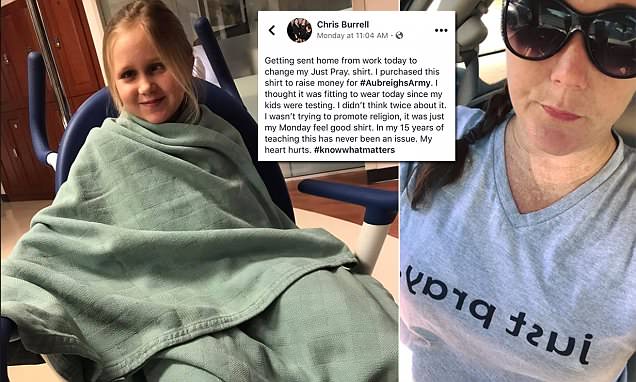 An Alabama grade school teacher was sent home last week after she came to school wearing a T-shirt with the phrase "just pray" written on it, which was in support of a local 11-year-old fighting a brain tumor.

"Getting sent home from work today to change my Just Pray shirt. I purchased this shirt to raise money for #AubreighsArmy. I thought it was fitting to wear today since my kids were testing," the teacher, Chris Burrell of Pearl Haskew Elementary School in Alabama, said in a now-deleted Facebook message last week.

"I didn't think twice about it. I wasn't trying to promote religion, it was just my Monday feel good shirt. In my 15 years of teaching this has never been an issue. My heart hurts," Burrell added, according to The Daily Mail, which captured a screenshot of the text.

Mobile County Public Schools Superintendent Martha Peek told FOX10 News that the reason Burrell was sent home by the school principal was because the "just pray" message could have caused offense to other students, and that it violated the school's dress code.

"So at the point of looking and seeing 'pray' on it, the principal said, can you put on a sweater or something, knowing that there are other people who object to that ... we have to be cognizant of everyone's beliefs or everyone's thoughts in a public school," Peek stated.

As Burrell explained, she was looking to support 11-year-old Aubreigh Nicholas, who last year was diagnosed with a rare and inoperable brain tumor. 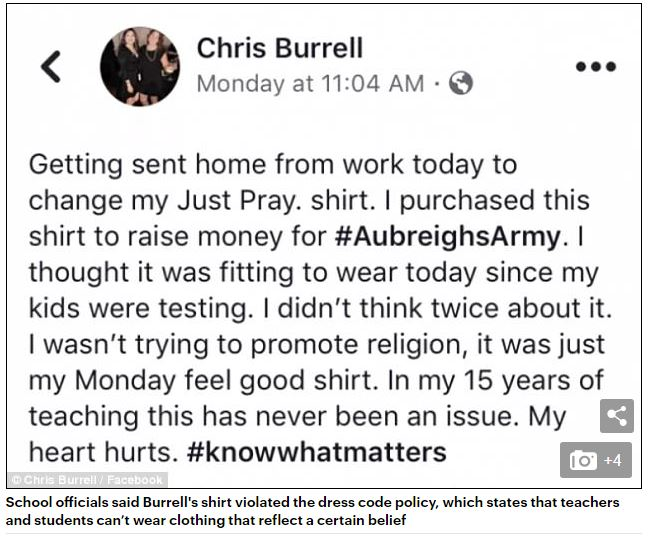 A Facebook page set up in her support, Aubreigh's Army, seeks to raise awareness and issues community challenges in the fight against diffuse intrinsic pontine glioma, or DIPG.

Peek pointed out that the school supports Aubreigh's Army, and noted that the principal who sent Burrell home was unaware that the "Just Pray" t-shirt was part of the initiative.

"We're totally supporting her, I think that this was just an unfortunate connection there, but still the principal would have had to exercise her judgment," the superintendent explained.

"What you need to know about Aubreigh is that while kind, caring, and obsessed with crafts and dance, she is FIERCE. DIPG won't stop this kid! To make sure she and her mom and dad have every resource they need to put the boxing gloves on and fight this, we are enlisting your help," the page states.

"Give for the child you know battling this crazy disease, for the friend you have battling another cancer, or give in thanks for your personal health."