Jake
Top Stories
02 May 2018
TAG:
NYC Politico Takes On Internet Deputy Journalist- Fails Miserably!
Writer called out Councilman Justin Brannan for boasting about his own constituents' inability to practice free speech and then trying to walk it back. 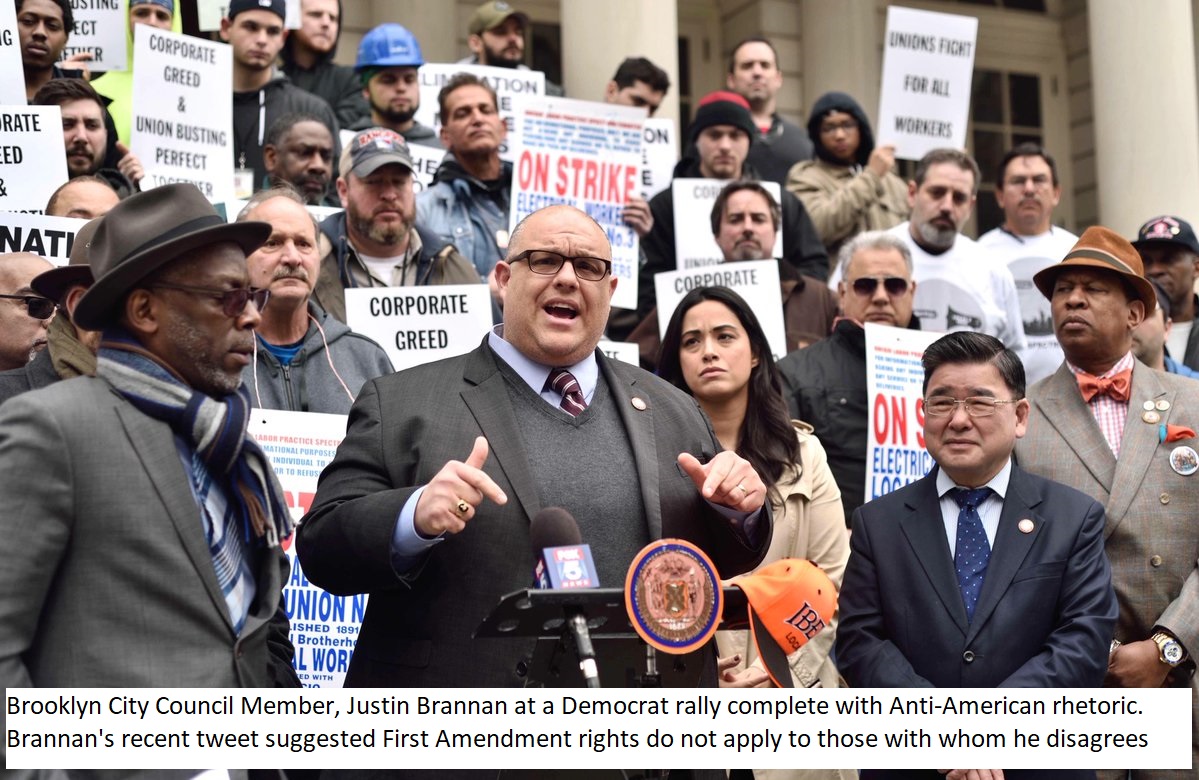 Last week a New York City councilman, who Tweeted a story from the leftist publication, Brooklyn Reporter, boasted “Looks like we've successfully chased the @NRA underground in #Brooklyn. Now they've gotta sneak around behind our backs and book catering halls under fake names just to have a meeting”.

The meeting that Councilman Justin Brannan spoke of was that of the Brooklyn Friends of NRA which the story referred to, likely to bring public attention to the location. The story also pointed out that the meeting had been canceled from two other locations due to protesting from anti-second amendment activists.

While a councilman is a city legislator with powers to take part in local legislation, he or she is also responsible to uphold the Constitution of the United States. In this case, Justin Brannan literally bragged about citizens in his own area feeling threatened to be able to practice their own First Amendment right. 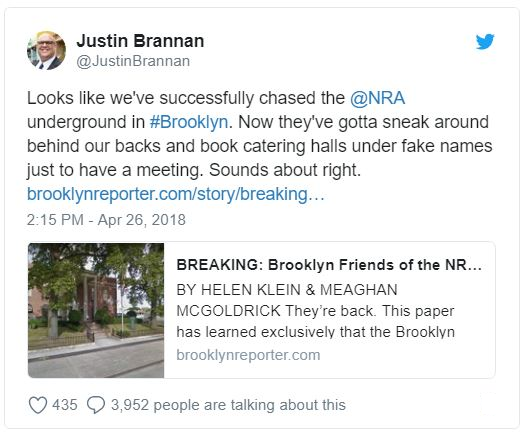 This tweet prompted an outcry from Twitter users who slammed the councilman for his apparent pride in silencing citizens.  His response was that this wasn’t “about intolerance”, but then quoted out-of-context statistics and the fact that the NRA supported conceal and carry reciprocity in order to support is position.

Essentially his tweet only reinforced that he was indeed intolerant.

Following this, Justin Brannan posted a separate tweet that alleged that “the NRA is not a civil rights organization”, but a lobbying group that spends tens of millions of dollars on a false narrative. 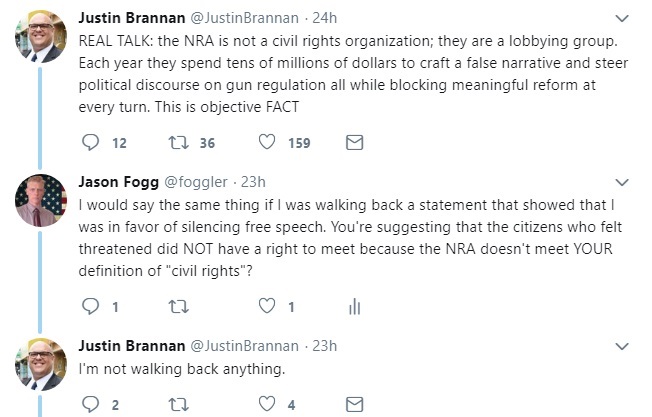 At this tweet, InternetDeputy.com writer Jason(Jake) Fogg weighed in with a response,“I would say the same thing if I was walking back a statement that showed that I was in favor of silencing free speech. You're suggesting that the citizens who felt threatened did NOT have a right to meet because the NRA doesn't meet YOUR definition of "civil rights"?

The immediate response from the councilman was “I’m not walking back anything”.

But he did, in fact, try to walk it back. Justin Brannan claimed that the NRA is nothing more than a “lobby group” while ignoring leftist so-called “civil rights” organizations who are also lobbyists, for a reason.

In other words, in Brannan’s eyes, the citizens in his district who were “friends of the NRA” were not covered by the First Amendment because they did not meet under a lobbying affiliation that he approved of.

But, regardless of organizational affiliation, citizens have a right to assemble and hold discussion. In fact, because it is a First Amendment right, officials like Brannan have a necessary obligation to ensure that it is unhampered, even if he disagrees with the content of the assembly.

Thus, Fogg immediately replied with a tweet. “So, to be clear. You ARE happy that citizens felt threatened to the point that they had to meet in hiding? It didn't alarm you in the least that a segment of the population could not safely practice their first amendment right? You were more concerned with your hatred of the NRA?”

Mr. Fogg continued in another tweet, “It is sad when a person charged with upholding unalienable rights is proud when those rights are infringed upon. You are supposed support free speech NOT celebrate when it can't be engaged in. No matter what.”

The councilman responded arbitrarily by claiming that Mr. Fogg didn’t have the facts, “Hard to engage with you when you just don't have the facts. Take 3 of the NRA event went off without a hitch. People protested outside. Nobody's constitutional rights were trampled. Everyone lived happily ever after.” 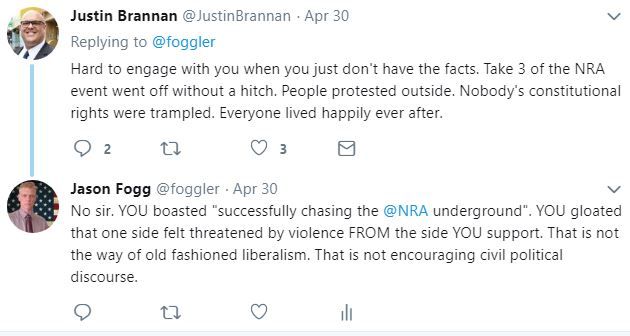 Brannan’s statement was a typical leftist trick used to change the argument. While he was correct that the third attempt of the Friends of the NRA did occur, the topic was NOT about the meeting itself, but his post that outlined his disdain for a group of citizens in his own district.

So as to expose the councilman’s intellectual ldishonesty, Jake Fogg responded in an attempt to redirect back to the actual topic being discussed—the councilman’s ill-will toward fellow citizens.  “No sir. YOU boasted ‘successfully chasing the @NRA underground’. YOU gloated that one side felt threatened by violence FROM the side YOU support. That is not the way of old fashioned liberalism. That is not encouraging civil political discourse.”

Justin Brannan did not respond thereafter, likely having realized that he had no argument to defend his actions. As a Democrat he claims to be “tolerant”, but in truth, he is ready to put down and oppress those with whom he disagrees. In the end, his own hatefulness and intolerance was exposed—not by a whistleblower or investigative journalism, but by his own words.