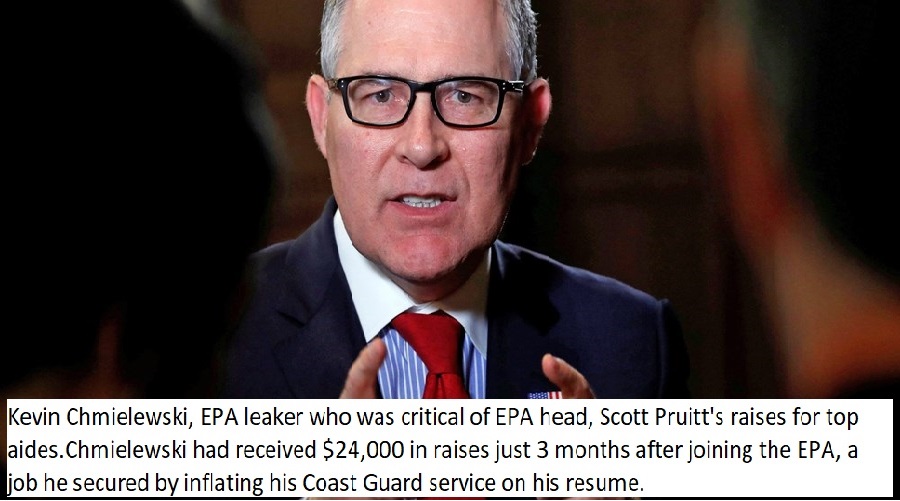 An Environmental Protection Agency whistleblower whose complaints about travel and spending excesses by Administrator Scott Pruitt led Democrats to write a letter to President Trump citing "grave concerns" about Pruitt’s leadership appears to have inflated his service and accepted large raises during his tenure at the EPA.

Kevin Chmielewski, the whistleblower who recently spoke to House and Senate members about his concerns with Pruitt, apparently inflated his Coast Guard service on the resume he used to secure positions in the Trump administration by roughly three years, according to a comparison of his resume with a Coast Guard spokeswoman's description of his service.

Additionally, Chmielewski benefitted from the same EPA hiring authority that he said EPA officials had used to dole out raises to two top Pruitt aides, according to knowledgeable sources and EPA documents.

Chmielewski received $24,000 in raises after just three to four months of service at the EPA, which neither he nor Democratic lawmakers have publicly disclosed even as the Democrats have cited his complaints about EPA spending on the two other staffers' raises, according to sources and EPA documents confirming the raises.

After talking to Chmielewski, the Democrats described the hiring authority as "obscure" and "controversial" in a mid-April letter to President Trump chronicling their discussions with Chmielewski about Pruitt's alleged ethical lapses.

The Democrats who signed the letter include Sens. Tom Carper of Delaware and Sheldon Whitehouse of Rhode Island, as well as three members of the House Committee on Oversight and Government Reform, Reps. Elijah Cummings of Maryland, and Gerald Connolly and Donald Beyer, both of Virginia.

Pruitt faced a grilling on Capitol Hill Thursday while testifying before two House panels. The appearances came after more than a month of negative headlines about his spending on first-class travel, his 20-members team of security details and questions about whether a condo-lease amounted to a "sweetheart" deal from an industry lobbyist.

Democratic lawmakers and some Republicans sharply questioned him about the spending, while other Republicans accused Democrats of launching a partisan witch-hunt against Pruitt because he has led the rollback of a litany of Obama-era environmental regulations.

Pruitt also responded to criticism from Democratic lawmakers and media reports about raises for two aides Pruitt brought to the EPA from Oklahoma. He acknowledged knowing about the raises but not the way they were awarded that circumvented the White House approval process.

The White House did not respond to a Free Beacon question about Chmielewski's record at EPA and the Coast Guard service discrepancy on his resume. 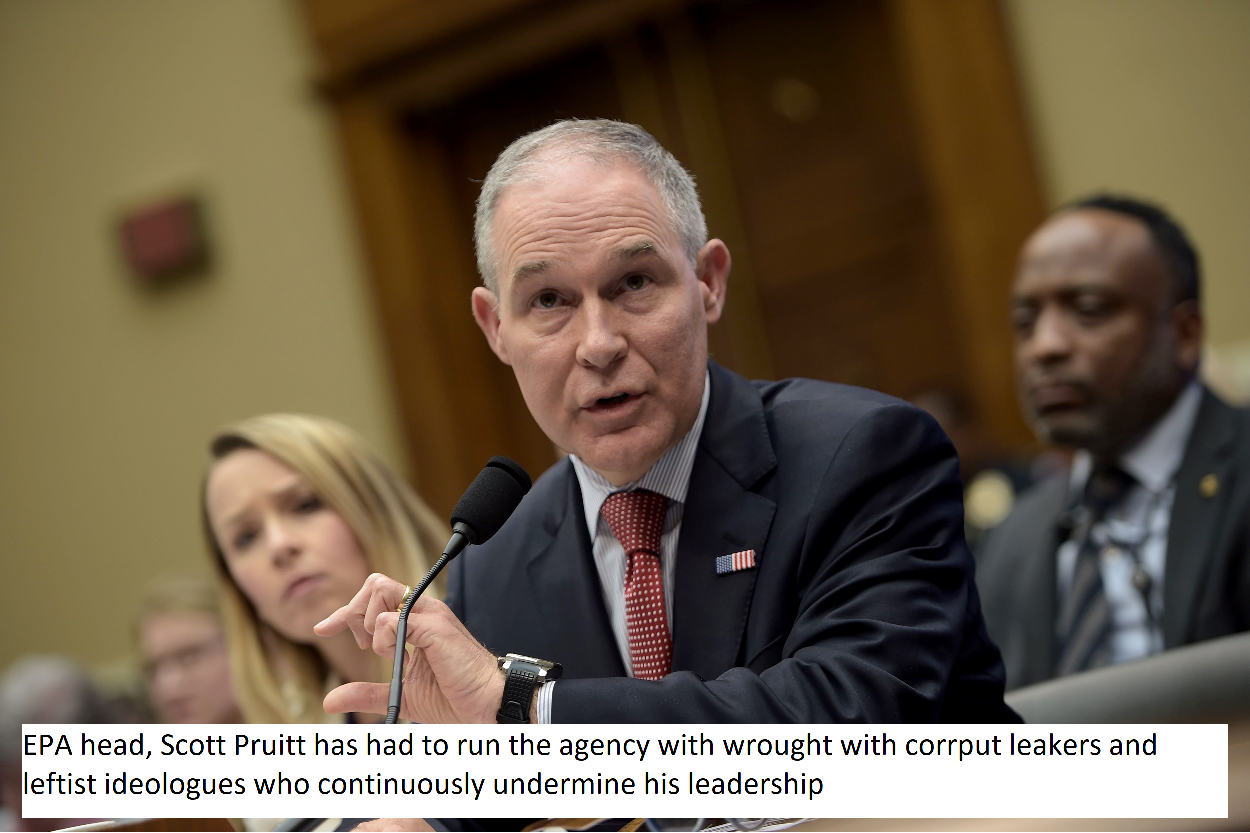 Chmielewski did not return an inquiry from the Free Beacon left on his cell phone. A second call to his phone number produced a message that his voicemail is full.

The resume the Free Beacon scrutinized is located in an online database of several top EPA political appointees' resumes compiled last year by the nonprofit Center for Public Integrity through a Freedom of Information Act request.

According to the resume, Chmielewski claimed to have served four years in the U.S. Coast Guard, from 1998 to 2002.

However, Amy Midgett, a Coast Guard spokeswoman, told the Washington Free Beacon that Chmielewski's service lasted less than a year, from November 1998 to August 1999.

Midgett also could not say whether Chmielewski was honorably discharged or was disciplined during his short stint in the Guard. However, she noted he was discharged as a Seaman Recruit with an E-1 paygrade, the lowest monthly pay in the Coast Guard.

She also noted that Seaman Recruits "typically graduate basic training at Cape May, N.J." at a higher rank, as either a Seaman Apprentice with an E-2 paygrade or Seaman with an E-3 paygrade.

"Because of the brevity of his service, we don’t have immediate access to his full record," she said in an email. "We're looking into obtaining that, but I don't have an estimate of how long it will take."

An outside expert on maritime military service also said those who graduate from Coast Guard basic training with less than a year of service would definitely hold a higher rank than Seaman Recruit with an E-1 paygrade.

Jim Dolbow, a senior acquisitions editor on professional development topics at the nonpartisan U.S. Naval Institute and a professor at the Naval War College, said Chmielewski's less than one year of service and ending rank is highly unusual and raises several questions.

Dolbow said those who leave the Guard with roughly a year of service with Seaman Recruit rank have generally had their rank reduced because of disciplinary action.

A spokeswoman for Democrats on the House Oversight and Government Reform Committee did not respond to a request for comment about the Coast-Guard service discrepancy on Chmielewski's resume.

The Democrats also did not respond to a query as to whether or not they knew that Chmielewski received his own set of raises and was hired through the same "obscure" provision of the law that Democrats faulted in their letter to Trump and Pruitt as giving Pruitt the ability to bypass the White House and approve tens of thousands of dollars in salary increases for a pair of staffers.

Chmielewski, two knowledgeable sources say, did not show the same concern for agency spending that he later expressed to Democrats when he pressed for and won two raises for himself totaling $24,000 within three to four months of his initial hire by the EPA last year.

The Democrats wrote in an April 12 letter to Pruitt that Chmielewski had disputed Pruitt's public claims he "didn't know" about "controversial" salary raises given to "your favored aides," arguing that those raises were "100% Pruitt himself."

The Democrats then went on to say that the EPA's chief of staff had said he wanted to move Chmielewski out of his position in order to give another aide his title and a $28,130 pay increase using an "obscure hiring authority under the Safe Drinking Water Act."

The Democrats did not disclose and may have not known that Chmielewski pressed for and received two significant pay raises worth a total of $24,000 and one title promotion within three months of arriving at the EPA last year, according to knowledgeable sources and EPA documents obtained by the Free Beacon.

The raises brought Chmiewleski's salary from $115,755 to $140,000, a more than 20 percent increase. His title also changed from director of advance to deputy chief of staff for operations.

According to an interim report of the EPA Inspector General's Office issued earlier this month, present and past administrators have used a provision of the Safe Drinking Water Act to fill up to 30 positions, known as "administratively determined," or AD, posts.

After the Democratic lawmakers raised concern about the use of the Safe Drinking Water Act provision to hire and provide raises for staffers, the IG examined six EPA employees' administrative files who were hired under that authority.

According to the IG report, an EPA document and knowledgeable sources, Chmielewski is identified as "Employee E" in the IG report and is listed as being hired under the Safe Drinking Water provision as an "AD" appointment.

Chmielewski, according to the report and an internal EPA document, less than a month later was then quickly converted to a "Schedule C" employee, a policy staffer who is hired in a "noncompetitive" way and works for the agency head or a political appointee.

Just two months later, he was promoted to deputy chief of staff for operations, still a "Schedule C" position, with a $126,958 salary, a nearly 10 percent increase.

Two months later in July of last year, Chmielewski argued that the 10 percent raise was still too low, according to the sources. He was then elevated to a Senior Executive Service position, which is classified as executive or managerial in nature, with a salary of $140,000.