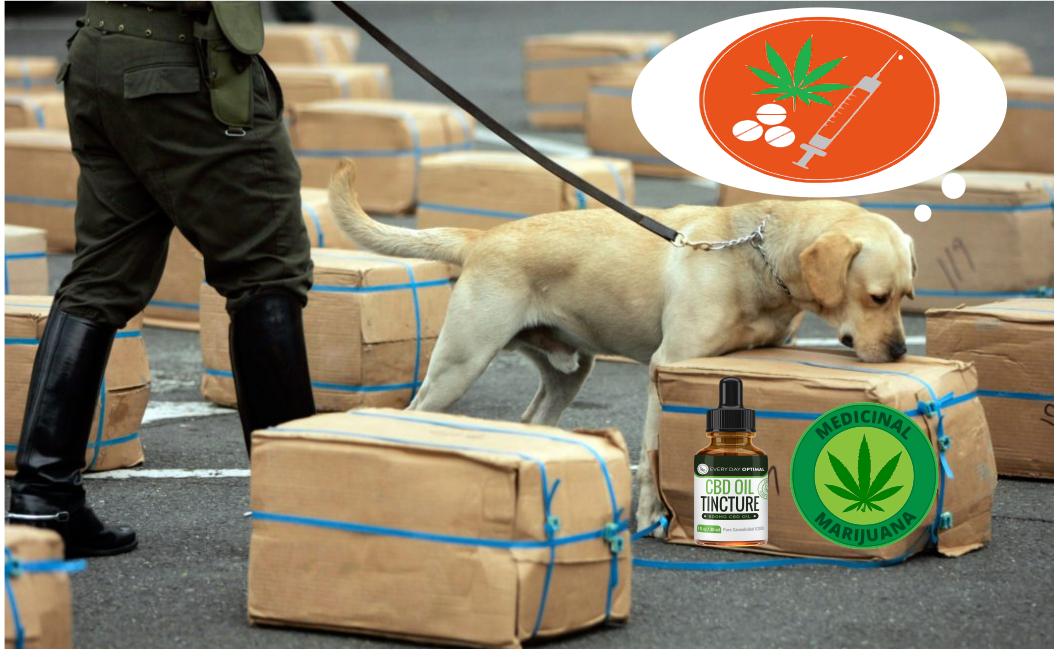 Frustrated vendors and customers of the CBD and Hemp industry inadvertently revealed a scenario that could seriously hamper law enforcement’s ability to effectively detect drugs and stop the entire shipping industry in its tracks.

Legally compliant hemp and CBD companies and their customers are finding it increasingly difficult to ship or receive products due to law enforcement agencies and postal detection incorrectly identifying packages as THC marijuana. The products are held and in most cases confiscated altogether.

One of the circumstances that occurred took place in Harrisburg, Virginia where two state police officers came to a woman’s home to tell her that her box had been seized at the post office. Her order? Hemp based health products that are completely legal in all 50 states.

The elderly woman, who declined to give her name, had been using mail-order hemp-based products for her health with much benefit for over a year without a hitch. So, why the visit from the police?

According to the troopers who showed up at her door, her package was detected by postal officials via a drug detection dog as containing “’schedule one” substance. Essentially, the dog cannot discern the difference between THC marijuana and hemp.

But, this hasn’t affected just one company or customer, it affects them all. Another CBD business owner claimed that he has even shipped non-hemp/non-CBD products and still has had difficulty getting them to his customers.

“I got a call from one of my customers out in Florida who ordered shake and vitamin supplements to see why his order hadn’t arrived yet so I told him I would look into it. When I started to check, he called me back and said that the DEA had contacted him and wanted him to open the package up in front of them because they detected drugs in the package.”, he said.

“My processing facility goes through painstaking measures to keep non-hemp products completely separate, in separate rooms, even using different shipping boxes”. But that apparently didn’t prevent contamination. In fact, shipping packages can become contaminated from minimal exposure including airborne particles or unwashed hands that have handled hemp/CBD products. In this case, it prevented a package from reaching its destination on time and at great embarrassment to his company.

Internet Deputy reached out to the customer who also wished to remain anonymous. “I just ordered vitamins and shake supplements”, he said. “I felt like I was some kind of criminal as I opened the package.  I mean, a sheriff staring at you can make a person feel intimidated to say the least and I just prayed to God that this wasn’t a set up or something.”

The customer’s story was corroborated by Sheriff’s deputy Bradenton whose K-9 unit is a part of the DEA taskforce in Florida. He was the contact that required the customer to open the package in his presence. Internet Deputy spoke to the deputy who could not say for sure if a detection dog can tell the difference between hemp products and marijuana.

“What we don’t know is if the person who packaged the non-hemp product smoked a joint before handling it”, said Bradenton. But the owner of the company that sent the product insists that was not the case. Since there was no actual hemp based products in the packaging, the only explanation that would account for the detection as a marijuana substance would be the contamination via airborne particulates or by handling with hemp-contaminated hands.

But, the Florida deputy has more pressing concerns as more and more packages are detected with both legal and illegal CBD substances. Since the onslaught of legalized marijuana in other states, the shipping industry has seen an increase of illegal drugs being shipped in hopes of being passed as legal CBD substances. And, in turn, a lot of legal CBD packages are being confiscated.

There is a consensus of outrage in the legal Cannabis product industry. Several representatives from these companies have expressed their frustration, but under condition of anonymity. If a company is implicated it could have damaging repercussions on the entire industry.

A Sherman Oaks, California CBD/hemp distributor told Internet Deputy, “This state already makes is nearly impossible to run a business and make any kind of money at it. Now I have people not getting what I send and I’m out the product and the sale, all at my expense.”

In a frustrated tone he also stated, “The problem is, I really can’t scream and jump up and down because I really don’t want the out of state customers that do get their product to panic and stop ordering, or worse, get sued because someone gets in trouble or goes to jail for receiving a product that is perfectly legal. I tell you, it’s a catch-22.”

This echoes what many of the businesses are saying in Colorado, where all forms of CBD and Marijuana are legal. In Boulder, a facilities manager for a manufacturer of both marijuana and hemp products said his company has also lost a lot of product as a result of “confused detection”.

“We know the laws in every state and won’t sell something to a customer in a state where THC CBDs are illegal”, he explained. “We’ve never sent a high-THC item to anyone even by accident and the only reason this is happening is because their dogs aren’t trained to tell the difference between hemp and weed.”

According to several law enforcement officials across the United States, dogs pick up the slightest scent of cannabis substances and cannot determine the difference between legal hemp and illegal marijuana. This fact could spell disaster for the hemp and CBD market. More importantly it could cause major problems for the shipping industry on the whole, affecting people who neither ship nor receive CBD and hemp products.

In an interview with Internet Deputy, a hemp distributor in Golden, Colorado asked a couple of questions that outlined the potential problems that this mis-detection could cause, “What would happen if a box full of ground hemp powder were to open up during the shipping process?”, he asked.”Or even worse, imagine what would happen if someone went around to all the Fedex, UPS, and Mail drop boxes in an area and sprinkled the dust inside them.”

Of course the answers are obvious. As mentioned earlier hemp dust can spread easily through the air or as a result of cross-contamination. In other words a box that has been exposed to or contaminated with hemp could very easily be detected as an illegal substance. Several boxes that have the dust on the outer surfaces could conceivably contaminate several hundred boxes being shipped all over the U.S.

Intentional contamination of drop boxes could very well cause havoc that could literally stop the industry in its tracks. If such an endeavor were to take place it is unclear just how prepared the shipping services are to handle it.

There has been talk among the more outspoken CBD companies that a coordinated effort may be underway to do just that, halt the industry or overwhelm it. While Internet Deputy has not confirmed it, there is a rumor that legal CBD distributors in six different states are planning a single day “postal contamination”.  Hundreds of shipping drop-boxes and mailboxes could see contaminated intentionally on a single day.

A hemp distributor in Los Angeles said, “It is a lot to risk for a company that is willing to stick their out, but I believe that it would either stop shipping entirely or overwhelm them so badly that even illegal narcotics would be undetected. I can’t imagine that they would try to take all those boxes and hold them up.”

“I mean, if illegal drug manufacturers caught wind of this, can you imagine what would happen?” said the LA owner. “There would be no way to stop them.”

Internet Deputy reached out to the leaders of the shipping industry to find out information regarding preparedness. The media contact for UPS, Matthew O’Connor provided a generic answer via email that claimed that the company “implements a number of security measures to prevent unauthorized shipments from entering [the} system.” The email went on to say that UPS works with law enforcement and keeps security methods confidential to preserve effectiveness.

The United States Postal Service contact, David A. Partheimer referred the request from Internet Deputy to the Postal Inspection Service, but in spite of several attempts to get the service to contact, nothing happened. Federal Express also refused to comment or even talk to a journalist.

The current political circumstance seems to show that full marijuana legalization will not occur on the federal level any time soon. Hemp is already completely legal in all 50 states even though it contains trace amounts of THC. To further complicate matters, some states who hold marijuana illegal allow hemp based CBD products while other states do not.

Marketing of these products to the general public shows no sign of slowing. It is not known at this point if detection dogs can be trained to differentiate between the two substances. One thing certain is that the CBD and shipping industries are on a collision course that could clash violently affecting millions of citizens all over the United States and slow a huge portion of commerce.