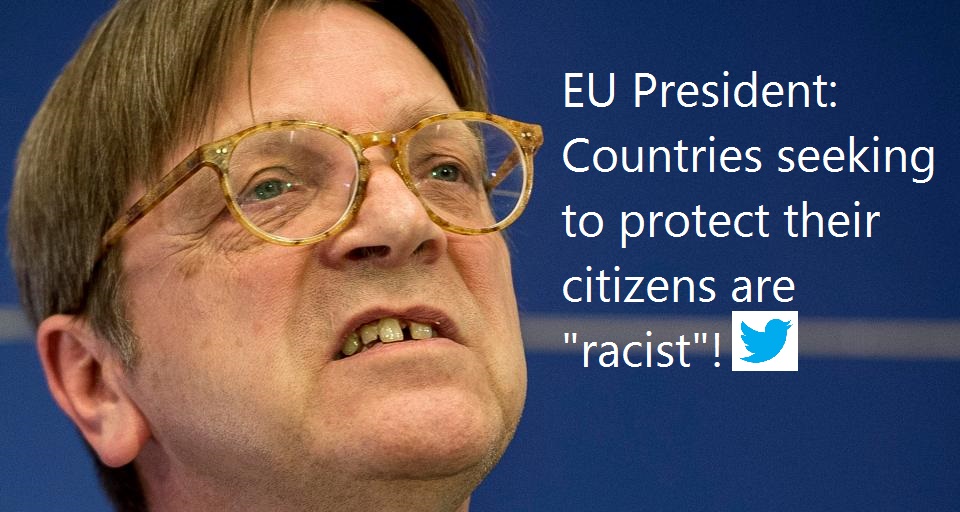 In a rant on social media, the President of the European Parliament, Guy Verhosfstadt slammed Poland and Hungary as “illiberal” and against democracy.

On Tuesday the EU head tweeted, “The European Union was built to guarantee our citizens' freedom, democracy and the rule of law. If the Hungarian and Polish governments want to build closed and illiberal societies, they must do it outside the EU.”

Attached to the tweet was an opinion piece from which he quoted, by the extreme leftist publication the Guardian which also labeled anti-globalist countries as “the devil” and “demons”. The op-ed, in typical progressive nature ripped any country that wished to protect its borders as “racist”.

Verhofstadt was specifically referring to the two countries “closed border” policy to refugee immigrants. This policy has, thus far, protected Polish and Hungarian citizens from terror attacks and rising occurrences of rape by immigrants that come from various illiberal Muslim cultures.

By contrast, most other members of the EU have experienced an onslaught of terror attacks, abnormal domestic violence, and a tremendous rise in the number of rapes. These are facts that either escaped the EU head or that he intentionally left out for hidden reasons.

In another tweet  Verhosfstadt wrote, “We should be wary of narratives based on the defence[defense] of so-called ‘national values’, which are used to mask racist hate campaigns fuelling anxiety against migrants and refugees #Values First”

But his tweets were unfounded and only represent the feelings of a small number of citizens within the EU. A recent poll found that 74 percent of the people in central Europe reject the migrant policies imposed by Verhofstadt and other “liberal” politicians.

While the President did not acknowledge it, his statement was doing exactly what he accused his opponents of—a narrative. In fact, the term “liberal” originally meant “free society” and did not imply the ability to force one society to accept the terms of another, which is exactly what Verhofstadt has done.

By claiming that Poland and Hungary are not liberal, he has attempted to portray them as evil and authoritarian. The EU itself is intent to force other countries and to accept policies that do not benefit their citizens. Thus, the EU President’s outrage is really an attempt to steal the liberties of those people he slams.

It has long been understood that the term “liberal” has been hijacked to disguise the intent of politicians who wished to impose the anti-liberty ideologies of socialism and communism.  Economist Friedrich von Hayek identified this first in the United States  in his 1944, best-selling classic Road to Serfdom.

Seeing this re-defining of the word, economists such as Milton Friedman and other scholars have come to refer to the original meaning as “classic liberalism”, whereby today’s use of the word “liberalism” means quite the opposite.

In other words, Guy Verhofstadt’s rant was really meant to solicit an emotional response from those who have been mislead to believe that “ protecting borders” is racist, while attempting to strengthen his power over the European masses.

After all, the more people believe in the sovereignty of their own nation, the less power Verhofstadt and the EU as a whole, have over the member countries.