But, in the reports of this address, there have been, thus far, no actual empirical facts to support Ms. Devon’s assertions. Essentially most of what she claimed seems to have come from some sort of emotion based feeling or unproven feminist theory.

Another indication that her speech is based on feminist claims can be found in her statement on transgenderism. “There are some schools that are single-sex schools, but there are transgender students in the year. You can’t presume that because somebody presents as a gender that that’s what they are.”

The notion that gender is separate from the biological sex of an individual comes almost solely from the ranks of the feminist movement beneath the leftist umbrella.  Of course, as in most leftist claims, empirical data is not to be found and talking points rely strictly on emotion and conjecture.

Unfortunately, the academic world in socialist UK, have and will likely continue to embrace such notions. For Natasha Devon, the address at the GSA conference was only one of many that contained unproven leftist rhetoric.

In fact, in a You Tube video titled “Is our society breaking our children’s brains?”, Devon addressed an audience on similar issues as the conference. In this speech, however, she not only spoke of the typical feminist topic of gender, but hit several general leftist talking points.

Many in the intellectual class and the unlearned in general may praise her for this video. But, to those people who subscribe to fact-based information, Devon revealed major flaws in her thinking. At one point she blames the rising inflation on the stress levels of young adults who are forced to live with their parents as a result, but then applauds the idea of social justice which, of course contributes to inflation on the highest level.

The statements that Natasha Devon made at the GSA conference created some controversy as they were reported in the media. In trying to defend her talking points, Devon took to UK’s This Morning.  She made the off-context point that she was only suggesting that children not be called by their gender to the head teachers rather than instructing them to do so.

She then doubled down on the real controversy by making several troubling statements regarding the issue.  She ignored a question from one of the hosts regarding political correctness backlash. Instead she answered by saying that what they[academia and parents] want is for people to try new things because “their children in a lot of instances are struggling.” It is important to note that she gave no actual data as to the definition of “struggling”, how many are “struggling”, and what they are struggling with. As usual, leftist thinkers often revert to referring to people in the abstract rather than actual individuals. 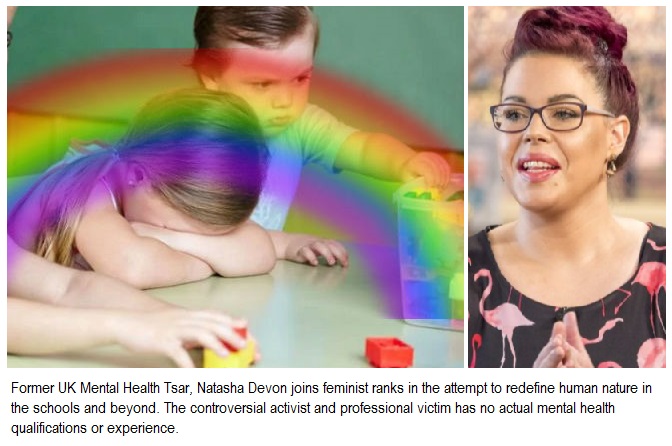 The former mental health tsar was asked another question about how a person just out of school might take being addressed by gender in the work place environment when unaccustomed to this since these rules are, thus far applied only to academic institutions. Devon, once again, skirted the question by claiming that this is a new development that has “been underground for a very long time”. She went on to mention two people in academia that are working on ways to “redefine what it is to be a male/female.”

While Devon sounds like a positive intellectual person, the underlying issue is how she and the feminist community will decide to force public compliance. It is most certain that more and more political correctness (PC) will ensue, and most leftists and media outlets will be complicit in the process. As usual, more freedom and liberty will be lost in those societies like the UK who allow PC “thought police” to silence the masses.

Overall the claims made by feminists like Natasha Devon are rooted in completely unfounded statements, based on unfounded problems. They say “sex is between the legs and gender is between the ears.” They also insist that there is a huge epidemic of young people who are adversely affected by what amounts to pronouns.

There has yet to be any actual evidence presented to support any of these statements or notions regarding the topic of gender. Yet the real evidence to the contrary is completely ignored. In fact, all attempts to show that the very few people with gender identity issues (also known as gender dysphoria) suffer from a mental disorder that needs to be addressed are ignored by the media and discounted by academia.

In June of 2014, former head psychiatrist of Johns Hopkins, Dr. Paul McHugh released an article in the Wall Street Journal warning against sex reassignment surgery in place of addressing the psychological disorder of gender dysphoria. This and other articles by him have been lambasted in the media by LBGT and feminist extremists in the medical field.

Essentially these extremists are exacerbating the issue by refusing to acknowledge a mental disorder which accounts for disproportionate rates of attempted suicide. It is more important to them to push a fake social issue instead of treating a very real disorder. The irony behind the LGBT rhetoric is that they claim to be compassionate for those who want to transition, but it seems that “passion” disappears when it comes to treating a bona fide mental illness.

An article at TheStranger.com even documents the pressure that transgendered people often receive from the feminist-LGBT community when they decide to go back to their original birth gender. In other words, if transgendered people decide they are no longer transgendered, they are shunned and even mistreated much in the same way that conservative blacks are considered “not black” by leftists.

The whole notion that there is a real problem with mass amounts of students who feel adverse affects of being addressed by their gender pronouns is preposterous. It is obvious that pseudo-intellectuals in academia have created an issue that was not an issue before, and have tried to portray it as an “out-of-control problem”.

This false issue scenario is not the first of its kind in academia and leftist circles in general. In fact, this is only recent in a long line of false narratives presented by the left in order to evoke the need for more government involvement in the lives of everyday citizens.

Economist and author, Dr.Thomas Sowell pointed this out regarding sex education. In 1960 sex education was proposed to take place in the school system in order to combat the “rising pregnancy and STD rates among teens”. The proposal was based on a false issue as both teen pregnancy rates and STDs had actually been declining in the previous decade leading up to the proposal.

But while the false narrative of the day portrays that students all have feelings of oppression due to being addressed as a pronoun, there is a very important, yet forgotten element in this story—the parents. As reported by InternetDeputy.com in May of this year, the teaching profession seems to act autonomously without regard to parental wishes.

Parents carry no sway among pseudo-intellectuals who wish to create new problems for their children. They are seldom mentioned, and when they are, they are referred to, as the students, in the abstract. Natasha Devon, GSA, academia in general, and the media all seem to follow suit.  Add to it the UK government’s willingness to usurp parental rights, as we saw in the Charlie Gard case from earlier in the year, teaching “professionals” have little reason to worry what parents actually think. 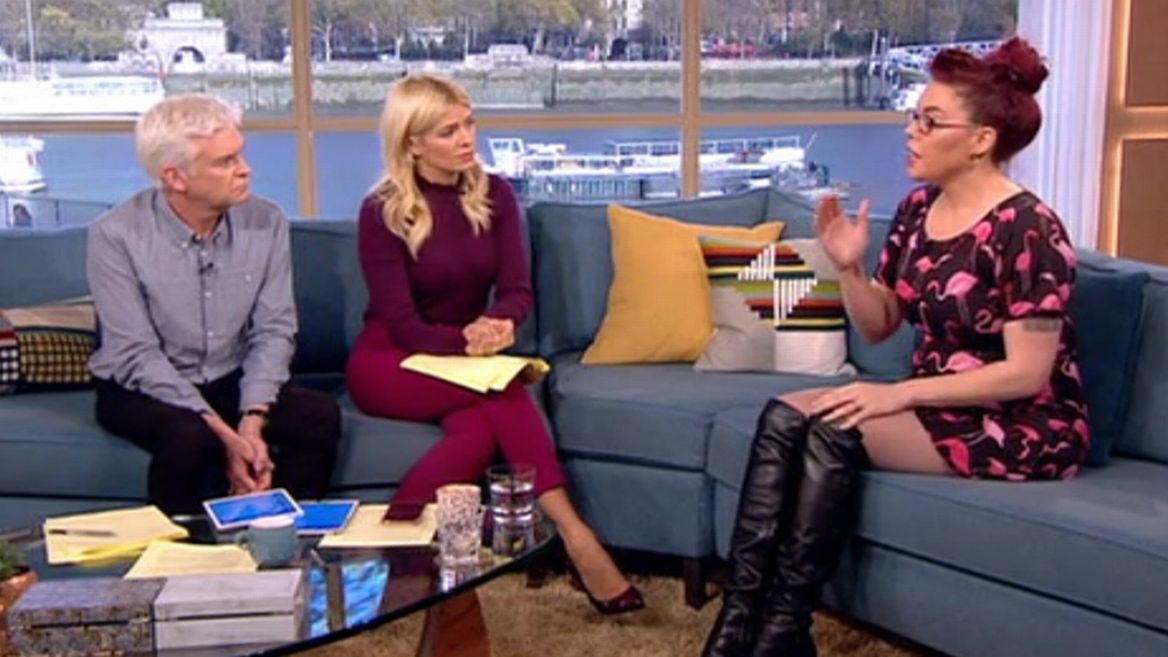 Aside from Devon herself alleging that parents are sometimes “helpful” in eradicating the gender address, little has been mentioned as to how parents overall feel about this topic.  Indeed, the very idea likely conflicts with the values that, at least some these parents are trying to instill in their children.

Over millennia, there has never been an indication for the need to eradicate the address of people by gender. There has never been a single shred of evidence that points out the need for such an endeavor. Yet, all of a sudden, the feminist movement has decided that there is a “rampant” problem regardless of the lack of real evidence.

When evaluating claims from people like Natasha Devon, it is worthy to note the underlying belief system. Devon, while a feminist, is also part of the larger leftist ideology. Since nothing in leftist thinking is rooted in real science, it can be assumed that she believes that the common ordinary citizen in a free society is simply not intelligent enough to decide what is best for him or her and should rely on pseudo-intellectuals as herself for living standards.

And, while she may try to sound positive and inviting of different points of view, the end result of what she proposes necessarily requires for there to be less personal choice and absolutely no freedom to speak out when the fallacy has been identified or debunked.

Devon herself was terminated for her position as the UK’s “mental health tsar” for making outrageous statements, but with more power being given to feminists and leftists in general, it is only a matter of time that more like her will take power. This forceful way of thinking will increase to the point that government will indeed be able to force any ideology onto its citizens. Currently, political correctness is the tool the UK and many other civilized countries use to control language, but in the foreseeable future, PC will likely give way to legislation whereby it will be a crime to debunk any feminist or leftist myth.