New Oregon Law Allows for the Confiscation of Firearms Featured 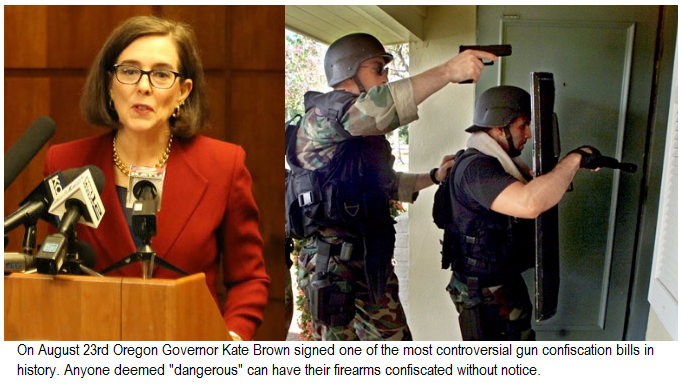 By:Jake Fogg
Oregon—On August 23rd Governor Kate Brown signed into law, a new bill which allows the confiscation of firearms without notice. The bill is disguised as “dangerous person only” order but gives any of the progressive judges in Oregon the ability to order confiscation of weapons based literally on hearsay.

On the surface, the bill, which goes into effect on January 1, 2018, is designed to confiscate weapons from people who are suicidal or dangerous to society. However, a further look into the bill gives the state of Oregon the ability to confiscate guns solely based on hearsay evidence which can then be turned over by law-enforcement or people living in the same household, to a judge.

The confiscation takes place when “concerned individuals” or law enforcement makes a request for what the law labels “extreme risk protection order”. The law states that only a judge can issue the order and must grant or deny it within 24 hours of the request.

The following are reasons that the judge can issue the so-called protective order:

Most of these reasons are broad and can be interpreted by a progressive judge in a way that can satisfy the requirements to obtain an order. The terms “reckless”, “illicit”, “threatened”, or “history” are all ambiguous terms that can be used to determine that a person is “dangerous.”

As it stands, a progressive law-enforcement agent could conceivably research a citizen’s social media profiles for anything that the agency decides to label as “extreme” or “dangerous”. It could then turn the information over to a progressive judge and get the order signed without having any actual evidence of violence or danger.

With this tyrannical legislation it is altogether possible that a person, for example, who makes an argument in support of shooting a person breaking into a house illegally, be considered “unstable”. It only takes a person to be offended by this and turn it over to law-enforcement individual to commence the steps to issue the order. The new law only provides that a judge deem this “dangerous” behavior and sign off on the order.

Upon the issuance of the order, the subject must turn over all firearms to law enforcement or a licensed firearms dealer. Law enforcement may also confiscate firearms and even gun licenses from the residence directly.

This bill allows for an “ex parte” hearing, which means that the person subject to the order is not afforded a fair trial. Nor does it give the person any way of protecting second amendment rights prior to the confiscation taking place.

In fact, the only recourse for someone who is the subject of an “extreme risk protection order” is to apply for a post-confiscation hearing within 30 days of the order. The hearing is required to happen within 21 days of the request.

Since the legislature and the judiciary in the state of Oregon are predominately progressive, it is likely that most innocent victims of this bill will have little success in overturning the confiscation order. While the order lasts one year, the person or agency that requested it can re-apply for the order prior to the year’s ending. However, there is speculation that more laws will be enacted later in the Oregon legislature that will make previous orders stand indefinitely.

Governor Kate Brown claims to be in support of freedom and liberty. Her office is available for any and all feedback regarding this matter. For further information, interested parties may contact the Oregon Governor’s office online or by calling (503)378-4582.