Jake
Top Stories
15 August 2017
TAG:
White Supremacy is Alt-Left NOT "Right"
An Examination of The Ideology of White Supremacy Shows That it is a Product of the Left

What Happened in Charlottesville was  misreported on several accounts.

Hello, I am Jake with Internet Deputy.com where its not about  politics, its about freedom.

Today I want to address the situation that occurred in  Charlottesville Virginia. I would like to preface this first by saying  that no one in my organization is for white supremacy.  In fact,  no one who subscribes to that line of thinking will ever be  allowed to partake in commentary or news reporting for Internet  Deputy. As I said a second ago, It is not about politics, it is about  freedom.

Freedom is what I want to talk about now. There has been a recent movement in the media to label anyone on the right as a “white supremacist”. We saw it this past June especially, when Act for America put on a nation-wide anti-sharia protest.  The New York Times and the Washington Post and several other major news outlets labeled ALL the protestors as “white supremacists.” However, when you view the on-the ground videos on You Tube you can see that the protests were anything but white supremacy in nature.

Sharia law, after all represents the absence of freedom and is completely unconstitutional. What is it? Essentially it is the ownership of women and the enforcement of a single religion in society. You can’t even own a dog under Sharia. And yet the news media in typical leftist fashion tried to make it about race and “white supremacy.”

But I realize that true white supremacy does exist. And, sadly the media will take this episode in Virginia and run with it and every person who attended this on the right will be labeled a “white supremacist”, when in fact they all were not. Some were there to simply protest the taking down of the statue of Robert E. Lee. Many see this as an attempt to rewrite history, which we all know is dangerous.

And for those who are true white supremacists—the neo-Nazi or KKK types—they are not “alt-right”. They are not anything right at all! They are just another group of leftists.  Racism on any level in this country has ALWAYS been perpetrated by the left. As much as the left has tried to pass the racism card to the right, it has always been alive and well among leftists.

While the terms “Republican” and “Democrat”  sometimes these days have a grey area between them on some issues, I would say they are an accurate assessment of the measure, for the purposes of this argument, of the right versus left when it comes to racism.

At the beginning of the Civil War there was not a single Republican slave owner. After the Civil War the KKK was used as a pseudo-military arm of the Democrat Party. President Woodrow Wilson, another Democrat, was responsible for segregation in federal offices.  Jim Crow laws were enacted by Democrats, and the Civil Rights Act was opposed by Democrats in the South.

Social programs such as affirmative action, minimum wage, and welfare, which were imposed by the Democrats, absolutely destroyed the black family unit as well as the living conditions for blacks in inner-cities all over the country. There are many other examples where direct or indirect racism has taken place, but fast forward to today.

Racism has changed direction but it is still racism. Ironically the racism that is directed toward whites today is literally what keeps many in the black and Hispanic community down. They are told from an early age in the school systems that whites “stack the deck” against them. They tell them that “systematic racism” is occurring at all times.

And more and more they are told how white people have an automatic “privilege” that gives them advantages over minorities. Instead of challenging these young blacks and Hispanics to achieve and be better, they dumb them down and make them believe that the system is rigged against them. In the colleges they make the curriculum for them easier to get a degree even if the degree will not help them to succeed in the real world.

Young minorities are set up for failure every day in this country and it is all done by the left. I realize how difficult this is for some on the left to believe, especially after years of brainwashing, but this is pure racism regardless of the color of the people selling this nonsense. It is still racism. 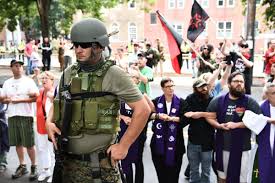 It is racists to essentially say that whites, by their skin color alone, do not have to work hard for success. And it is racist to say that blacks and Hispanics simply don’t have what it takes to compete against whites.  It is racist to intentionally omit the stories of self-achieved successes in the black and Hispanic community.  And this racism contributes to hatred.

And that is what this all about. Remember, in Star Wars, the Jedi could only control the thoughts of those who were weak minded. I realize that it may seem like an attempt on my part to marginalize this serious topic, but it demonstrates partly why we are at the point we are today.

The weak minded are literally willing to follow their emotions triggered by outside influence. They hear the controllers tell them what to hate and they hate. It doesn’t matter what color, race, sexual preference, or religion they are. They hate because they have been told to hate. Their hatred must be directed somewhere, so they direct it to who they are told to hate.  When people like to compare the right to Hitler, they fail to recognize that their own behavior engages in Hitler-style scape-goating.

And the leftist elites want control so badly that they will fuel this hatred and capitalize on it until they can say, “See! Look at yourselves! You can’t get along with one another unless WE control you ALL!” At that point, freedom of speech will be gone.

I mean, why do we have to have the term “hate speech” or “hate crime”? Isn’t a crime a crime anyway? If a man is guilty of murder, he is guilty of murder. Trying his crime as a hate crime is purely for show. Why would hate legislation even be needed if there is already a law against crime on the books and the society was truly trying to move forward?

The answer is that society is NOT trying to move forward. By trying to label something as “hate” gives more reason to continue to highlight racial tension and more leverage to eventually control language.  We see this garbage growing on the college campuses and more recently in some of the corporate world.

Instead of hate it is called “micro aggression”.  You know, that silly nonsense fabricated to shut down speech on college campuses? The thing about micro aggression is that it can be anything said at all that offends someone.

Does anyone remember Verenice Gutierrez back in 2012? Her idea of a micro aggression is a peanut butter and jelly sandwich. This stupid idiotic pseudo-intellectual principal in Portland, Oregon actually said that a lesson plan that had mentioned a peanut butter jelly sandwich had broader implication about race. Why? Because some of the students may not be Americans who eat PB&J and therefore could be offended by it!

While some may consider this laughable, imagine what the students are learning at that school. And look at what just happened early last week, five years later, at Google. James Damore was fired for literally pointing out empirical data. Imagine, a company that actually deals in data and computing, and programming and so fourth, firing and employee for pointing out a fact.

What was the fact? That disparities between women and men are not always a result of discriminatory treatment. Several times in his memo that spelled this out he even prefaced himself by saying that he was not against women and in fact believes that sexism does exist. But that didn’t matter to the executives who decided to fire him.

I said that he prefaced himself and I would like to make a quick point about that. If you are watching this and you are white, have you ever noticed how we almost subconsciously preface ourselves before discussing a person who is not white? Pay attention to yourself and others when this situation arises. If you are, for example, talking among coworkers about the performance or behavior issues of another coworker, do you preface yourself? Most white people do it almost automatically. They will almost always say, before making the statement, something like, “I’m not a racist, but…”, or “I don’t have anything against Hispanics...”   I personally think that a society that has moved past the racial tension should not require a preamble when talking about people of a different race.

Getting back to the main issue, the point of all this is that the left is using anything it can make up to control language. They use race baiting to create hatred within society. Then they get rid of free speech by outlawing “hate speech” and then whenever they want to shut you down, they will simply call it hate speech. If this happens they then get to throw people in jail for saying “peanut butter and jelly sandwich”, because that is hateful and don’t think that I am being funny.

If you are watching this and you are not white or believe the left, please understand, they want you to hate me and they want me to hate you. They may tell you that “I care for you because I know how down-trodden you are because there are so many whites out there that don’t like black or Hispanic people. But I’m your friend and I really care.” Bullshit! They don’t care about you! They want you to capitulate and live as they see fit.

Ever notice how the leftist Democrat party just absolutely loves illegals, but say very little about the educated Legal minorities, unless they are Muslim? Why do you think that is? See, they don’t care about anyone who wants to be a success on their own without dependence on the government. They want a permanent underclass and a voter base who needs them to “be their friend” so they can continue to keep people under their thumb and dependent.

Try this litmus test. Ask any Democrat politician if open borders would be okay as long as migrants could not get welfare benefits. They will throw a tantrum. Why? Because they can not use people who can fend for themselves. They can only use people willing to sacrifice their economic freedom. They only want illegals because they represent more people who will vote more power to them.  THEY ONLY CARE ABOUT POWER!

What we saw in Virginia, at least where the protestors who actually subscribe to white supremacy, was literally the left versus the left. Both sides played into the hands of a narrative that wouldn’t even exist where it not for the out of control leftist ideology.  Racism and hatred are caused by the left, fueled by the left, and owned by the left.

Because the ideas of freedom and liberty reside on the right in America, racism can never have a part of the ideology.

Read 21401 times Last modified on Tuesday, 15 August 2017 02:33
Rate this item
(0 votes)
Tweet
More in this category: « Hungary Offers Asylum to Victim of Swedish Christian Discrimination! Deep-State Trying to Get Rid of Trump By Any Means »