On July 4th theguardian.com released a story with  the headline  “Sex robots promise ‘revolutionary’  service but also risks, says  study”.  The article,  written by Haroon Siddique, is paired with a  “scholarly study” and a video showing a feminist  “investigative  reporter”.

Given the type of information mentioned in this  article it is  necessary to begin by issuing the  following caveat:  The Internet  Deputy is a  conservative-with elements of libertarianism,  news-  fused-with-commentary reporting web site.  The goal in its  reporting is essentially to expose those thing that run contrary to  freedom and liberty. (Read More)

This web site seeks to show political fallacies as reported in the  mainstream media, leftist media, in politics, education, and  where ever else liberty is at stake. Internet Deputy seeks to    maintain decency consistent with conservative values. Some of the greatest values of conservatism are liberty, respect of personal privacy and private property, and overall decency toward others. 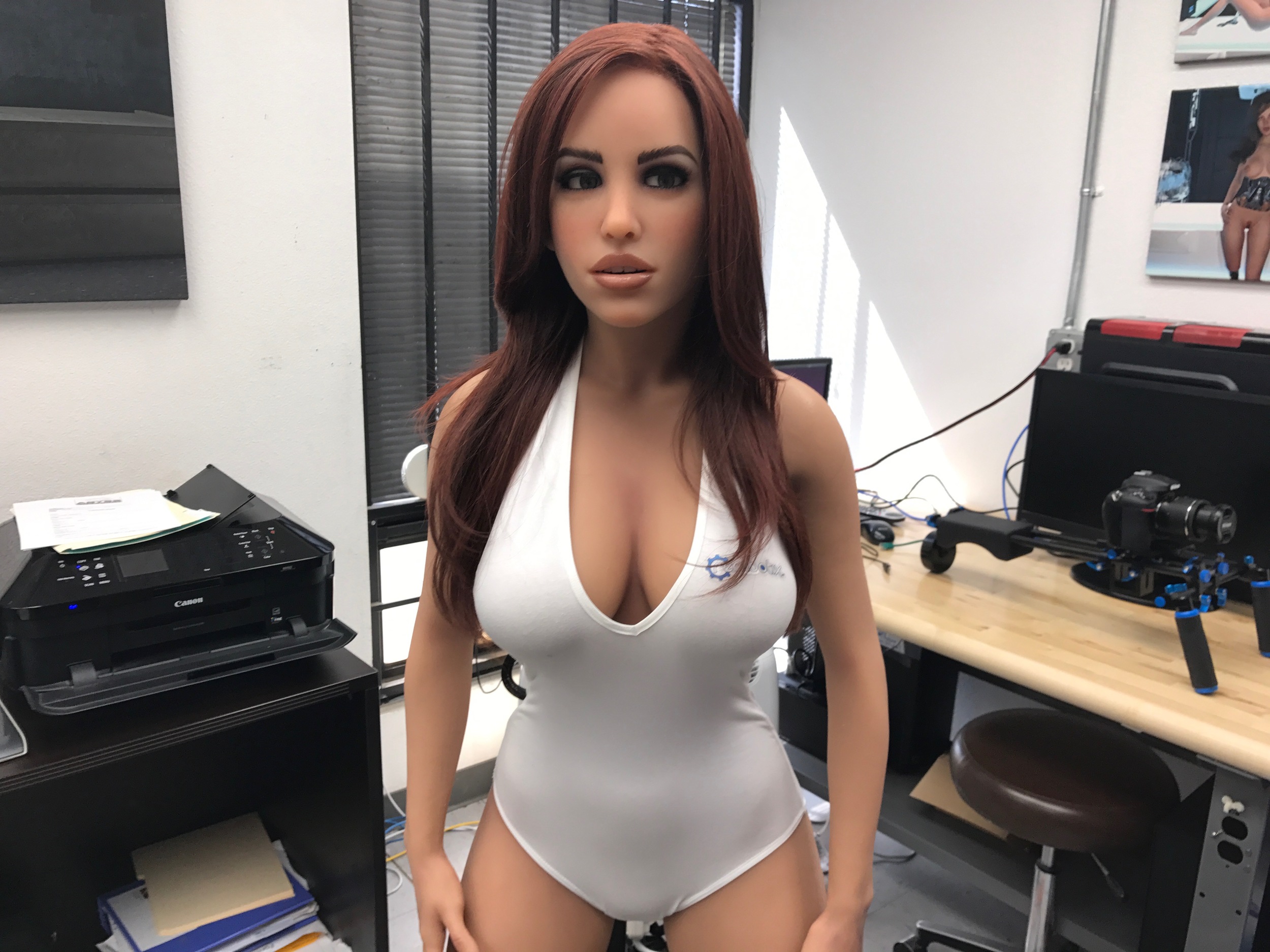 Therefore, Internet Deputy’s purpose here is to neither to support or oppose the use of sex robots, but instead, highlight the progressive thinking that seeks to defy the laws of nature and basic human instinct.

But, this type of thinking is often riddled with contradictions. For example, Muslim bakeries have been filmed refusing to cater to gay weddings, but the mainstream media refuses to report it because Muslims are in a “protected class “.

Liberal-progressivism is the de facto ideology of the LGBT community and most within are indeed progressive. Yet liberals also claim to support Sharia Law even though the Islamic ideology strictly prohibits the practice of any homo-sexuality.

It is also worthy to mention that liberal-protected Sharia also promotes the ownership of women as objects, which happens to be the central contradiction in this story.

The guardian text of the story is written, as in most liberal “news” publications, in a way to appear as an objective report, but is mostly commentary. Early in the story it is very clear that it is not in favor of the idea of sex robots.

The story does point out some of the potential benefits such as use as a masturbatory tool or for people who simply cannot find a mate, but it is quick to also show the potential “objectification of women”. This has long been a talking point of the left, and particularly feminists, who are against traditional Judeo-Christian marriage, male instincts, and anything in the pornography or sex industry.

The story also refers to a study by the “Foundation for Responsible Robotics”(FRR). FFR is a liberal organization in the UK that claims to stand for the “Accountable Innovation for the Humans Behind the Robots.”

However, the only thing that FRR truly espouses that isn’t political and based on decency  is its position against makers of child sex robots. Beyond that, the organization is obvious in its feminist stance on almost every point that it makes against sex robots.

The so-called study is tantamount to a collection of opinions. Studies are supposed to be questions posed with reported findings based NOT on desired outcome, but empirical data. Most of the questions and finding tended to follow typical liberal ideology.

But one question, in particular showed findings that appeared as if they had been taken straight from a manual on feminism. The question “Will sex robots change societal perceptions of gender?”, was perhaps the most telling portion of the study.  One part of the rather lengthy section argues:

“sex robots by their very design, encourage the idea that women are subordinate to men and mere     instruments for the fulfillment of male fantasies. This type of harm has been explored in the context of pornography and is reproduced in the harm caused by sex robots. Like pornography, use of sex robots sexualizes rape, violence, sexual harassment and prostitution and eroticizes dominance and submission”

This statement, though cited, is based, once-again, on an opinionated work. It is based strictly on speculation with no empirical evidence. Another problem is that it fails to remember that the makers of sex robots also make male versions. By ignoring this, this study only serves to support a feminist view of the issue.

The same section of the study continues with a statement by Kathleen Richardson, a senior fellow in Ethics of Robotics, De Montfort University. She proposes that male engineers in robotics are transferring their “heteronormative and sexualized versions of women onto the objects they produce.” According to her, women are axiomatically considered to be in service to and as objects for men. And, building female robots for sexual service only reinforces this notion.

Another point made in this part of the study is that the market for these sex robots, based on what is demanded, could hamper any advances made to the cause of ridding the world of gender identity. In other words, these feminists feel that WHAT people actually WANT will destroy their idea of gender neutrality.

The study also takes the opportunity to insert another liberal talking point when it points out how “unfortunate” it is that women participating in the occupations of computer science and artificial intelligence is very low. Begrudgingly it also admits that even if the percentage were higher it would be the (evil) market that would demand that robots produced would not be “gender neutral”.

The entire study is 36 pages long and essentially is a clever attempt at rehashing typical liberal talking points about feminism based on “educated opinion”.

The news story itself in theguardian.com is mostly just conjecture based on the study. However, the attached video, which mentions little of the study, is of a feminist reporter who, instead of getting objective information, is actually just negative toward the manufacturers and researchers of the robotics.

The reporters voices her opinion by asking the robot makers evasive questions on how they feel about creating a and object that is like “owning someone”.  Her facial expressions give away the fact that she detests the answers given by her interviewees.

She even asks a naked female model, who is being cast for a robot body mold, how she feels about men who will “own” the reproduction of her body and what they will be doing with it. The obvious feminist, goes as far as saying, in an irritated tone, “because you are literally being made into a sex object here!”

To the reporter’s dismay, the model answered that it did not bother her because she felt like she was helping someone who might have intimacy issues.

The video also showed an eccentric young man who had these robots living with him as if he were in a relationship. This was obviously a ploy by the makers of the video to show another “bad” impact of sex robots.  It is typical for liberal reporting to include extreme examples to support the narrative rather than report the facts.

But then the video turns to a person, also mentioned in the study, Kathleen Richardson, who alleges adamantly that sex robots were bad for humanity and that they “turned women into objects.” She too uses the opportunity to pull out another liberal talking point.

Richardson, in an emotional tirade, outrageously claims that using a sex robot also perpetuates a “rape culture” by virtue of the robot not requiring to consent before sex. This happens to conveniently coincide with the same charge that feminists say is taking place on college campuses in general.

The current incarnation of the feminist movement, has for decades, sought to denigrate all forms of natural male behavior. It consistently shows it disdain for anything it perceives as “dominant” when it involves men.

While feminists deny it, their group-think states that they will not be satisfied until men are completely dominated by women, as proven by this study. Feminists do not want men to have sexual relations with women. At every turn, they can be found discouraging males from pursuing women. 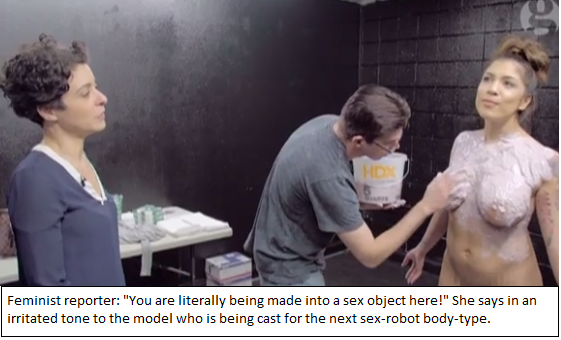 In other words, all men should be mindless, sexless, and genderless eunuchs.  Such thinking, while portraying itself as “seeking equality”, is psychologically troubling and deeply rooted in hatred.

It is clear that there are likely valid questions to be raised regarding the use of sexual robots. The idea that there are potential backlashes to this is certainly not in dispute. However, the real problems associated with this issue demonstrate the difference in thought between two sides.

Most of the concerns mentioned on the article and study deal with the “ethics” of the issue. But Conservative thinkers rarely ever refer to ethicists or ethics in general.  Ethics deal with what a group of people decide is decent and correct. But real world concerns come from morals and not ethics.

Most with views on the right consider morals to come from a higher source, or God, and NOT man. They are handed down for all people and not a particular ideology. Even those on the right who don’t believe in God, understand the difference.

The ethics of the aforementioned anti-robotic feminists are certainly not in line with what every other group of people believe.

But the real truth is in the irony of this article. Feminists are only a sub group under the umbrella of liberalism, an ideology that, by definition, automatically allows for people to be as sexually promiscuous as they like.

While Feminists show outright disdain for men, they show stronger support for liberalism, even when it contradicts their own sub-headed ideology.  Essentially before feminists are “feminists”, they are first and foremost “Liberal-progressives”.

Feminist protestors, writers, and commentators such as Huffington Post contributor, Leslie Marshall, outwardly demonstrate this as they join forces with other liberal factions to support Sharia Law. The radical ideology ironically supports the ownership of women as objects. This creates a nonsensical circular argument that must withhold information in one way or the other, depending on how it is being debated.