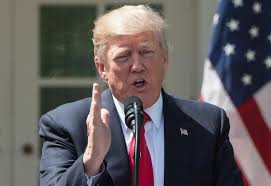 Yesterday, much to the dismay of many high-ranking leftists, President Donald Trump announced that the United States is withdrawing from the Paris Climate Accord.  The accord, which is actually a treaty, but only called an “agreement”, was entered into against Constitutional requirements by former  President Barack Obama in 2015 with enforcement beginning  late last year.

Shortly after the announcement, the governors of three states formed a union devoted to what the Paris Treaty was loosely alleged to accomplish, which was apparently the reduction of greenhouse gasses.

In addition to the governors’ “climate alliance”, several media sources, and government officials in the U.S. and even other countries  began reportring “news”  and emotion-filled comentary that showed one-sidedness in response to The President’s decision. None of these reports seemed to support the Trump agenda,  which is to benefit “ Americans first”.

While there was much disatisfaction expressed, very little was mentioned of actual  legalities of the issue to begin with including the hampered freedoms of U.S. citizens as wellthe fact that it was unconstitutional for the former president to enter into this treaty in the first place.

The three governors who committed to the so-called “climate alliance” were Jerry Brown of California, Andrew Cuomo of New York, and Jay Inslee of Washington state, according to the Time.com.   The small group of three claim that they are “committed to upholding the Paris Climate(Treaty) Agreement and taking aggressive action on climate change”.

In a press release, Governor Jerry Brown accused President Trump of being “AWOL on this profoundly human endeavor” and said that other states would “step up”. The California governor also called Trump’s decision an “insane move” and “deviant behavior from the highest office of the land”.

Brown failed to admit that the “behavior” of the Obama administration was also devious in that it intentionally sought to circumvent congress in the whole process. as he also omitted just how much of California tax payer money he would commit from his deeply-indebted state.

According to Rollcall.com, Andrew Cuomo also weighed in on the commitment to the Paris Treaty by saying that he would issue an executive order that supports the state’s commitment to environmental concerns.  He, like Brown forgot to mention just how much the tax payers of New York would be required to pay.

Yesterday, following the president’s speech, the Washington Post released an article claiming to “fact-check” the president’s comments during the speech.  However, the article written by Glenn Kessler and Michelle Ye Hee Lee, contained very little actual supporting data and mostly axiomatic statements thus furthering its overt commitment to supporting the anti-Trump narrative.

Another article released by the Washington post earlier today and written by John Wagner is an opinion piece under the heading “politics”.  The purpose of this article is to show that Trump only pulled out of Paris treaty to support his voter base by fulfilling his promise to them.  Wagner points out that Trump, “remains historically unpopular at this point in his presidency”, but fails to explain that the voter base support itself remains largely unchanged since his election.

Wagner also attempts to marginalize the base by pointing out only a certain segment of it, which could be stereotyped as “unintelligent”.  An example of this is evident when he writes, “Trump’s withdrawal from the Paris accord plays particularly well with rural backers who embraced his ‘America First’ mantra” and are wary of the impact of Obama-era deals cut with allies overseas.”

Other sources in the news were not as subtle, however.  In a show segment of MSNBC’s “Morning Joe” commentator, Joe Scarborough became emotional over the news of the withdraw. After implying that White House advisor, Steve Bannon told the president to withdraw from the Paris treaty, he then made the statement ,”Trump doesn’t know anything”.

Following this, Scarborough went on an emotional rant, almost yelling, referencing “President Bannon” several times.  He also claimed that “President Bannon” was only obsessing with a “small subset of the population”, inaccurately referring to the Trump voter base, presumably. However, he referred to “President Bannon” instead of Trump, so many times that it was possible the Scarborough might have been confused from an audience perspective.

But not only is the media showing its disdain for Trump’s decision yesterday, several countries that are part of the agreement, are also unhappy with President Trump’s decision to withdraw from the Paris Treaty.

According to a report today by the BBC, German Chancellor, Angela Merkel said the move was “extremely regrettable” but nothing would stop the treaty from moving forward.  “We need the Paris agreement to protect all of creation,” she said.

The European Commission and the UN essentially stated that the “agreement” was unstoppable. Several other countries in the accord expressed dissatisfaction with the President’s decision.

In this anti-Trump political climate, it is obvious that there is no support whatsoever for the president. However, regardless of media and outsider feedback, the president is doing exactly what an elected official is expected to do, support his constituents and carry out campaign promises. This idea is foreign to many in today’s political ranks and serves to promote a valuable lesson to those willing to learn from it.