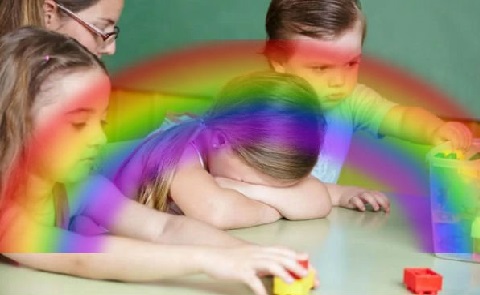 At a national conference in Cardiff, Wales, UK’s National Union of Teachers (NUT) voted for its members to teach LBGT lifestyles and issues to toddlers in preschools and nursery schools.

While this may be a surprise to many, this issue is not only in the UK, but also in other parts of Europe and in the United States that has been working its way to younger and younger minds.

One example of this occurred in March of 2010 when the World Association of Girl Guides and Girl Scouts held a no-adults-welcome panel at the United Nations in which Planned Parenthood handed out brochures titled “Healthy, Happy, and Hot”.

National Union of Teachers (NUT) stated that transgender lifestyles and same-sex relationships should be ‘promoted’ to children as young as two to reduce hate crime. An excerpt from the NUT Conference Final Agenda confirmed the statement in the wording, “…including promotion of LBGT+ matters for all school from Nursery throughout all phases of state education;”

NUT teachers complain that there is a “lack of policies which promote LGBT issues within schools”.  The teachers  at the conference agree that this has a “significant negative impact on the well-being of students and teachers who are homosexual, bisexual, or transgender.”

Much of the NUT Final Agenda was dedicated to ensuring that teachers were not required to carry an exceeded workload and seemed to complain about academic requirements being too strenuous. Yet, the organization encouraged its teachers to do extra to ensure LGBT standards were carried out even though the government had not yet made the standards mandatory for primary-aged students.

First, that it was more important to teach “LGBT standards” than actual academics, and secondly, that there was no interest in the parents’ input on LGBT indoctrination.

Much disdain has been  verbalized by NUT for the recent decision of the government to not yet require “complete” LGBT training due to the lobbying of Parliament by religious groups.

By contrast, the State of California enacted laws in 2012 that not only forced an LBGT curriculum on its students, but also made it illegal for a parent to opt his or her child out of the classes to avoid the liberal indoctrinations.

California also forced the issue as far back as 2006 when it passed a law signed by then-governor Arnold Schwarzenneger which required anyone receiving any type of benefit from the state, to condone homosexual activity.  The bill, known as the “Homosexual Education Conditioning Bill”, included children in public schools.

Although it was recently revealed primary schools in the UK may be legally required to teach students about same-sex couples, it is not due to begin until 2019.  However, with the current political climate in the region, it is possible that could change before it is mandatory.

But the NUT believes the amendment to the Children and Social Work Bill isn’t enough, and should require “age-appropriate content” on the subject at an even younger age. The organization also thinks that more should be taught to secondary students about safe sex in gay relationship.

NUT executive committee member Annette Pryce has openly voiced her opinion about the “right wing, religious lobby”, which she blames for having prevented ministers from proposing a more “inclusive” agenda for sex education.

“Generations of young LGBT+ people who have been failed by the system are still not told explicitly in the law that their lives are important too,” Pryce said.

On her blog page, Pryce rants in print at anything that prevents her style of sex education. In typical pseudo-intellectual fashion, Pryce slams anyone with an opinion differing from her own. In addition, Pryce shows no reverence for the parents who may feel that it is their responsibility to teach their children this topic.

NUT urged ministers to make proposed sex and relationship education (SRE) “inclusive” to so that lesbian, gay, bisexual, and transgender students “are told explicitly in the law that their lives are important too”.

The Union’s general secretary, Kevin Courtney, addressed the conference, “It is high time that PSHE(Personal, Social, Health, and Economic education) and SRE– including LGBT+ education – is recognized as an essential part of the school curriculum,”.

“It is important for a modern forward-thinking society to understand and embrace differences within our communities. The alternative is many pupils being isolated, bullied or misinformed and, for many, there is an impact on health and well-being that can last well beyond school years,” he warned.

Teaching sex and sexual relationships is not yet required for nurseries, but NUT members working in daycare facilities with toddlers are encouraged to teach it voluntarily.

In May of 2016, the former Obama administration issued a directive that required transgendered restrooms to be available in every public school across the United States.  This directive did not only target older secondary students, it targeted all students, including those with preschool-aged children.

Chief executive at Christian Concern Andrea Williams, however, argued that teaching sex and relationships education (SRE) to four-year-olds would be “devastating” and risks “robbing them of their innocence”.

While the NUT organization ideas seem farfetched, this is a mentality that has been in place for quite some time.  Through advancement of political correctness and other ideologies, Liberal-progressives have become emboldened and no longer care about freedom of religion or the sanctity of the family in deciding how this information is conveyed to children.