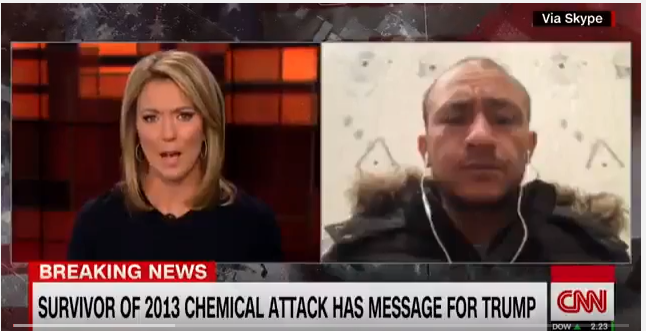 In an April 7th CNN interview with Syrian Refugee , Kassem Eid, Brooke Baldwin received a response that appeared to be unexpected, thus contradicting a long-running narrative that has been adopted by the news organization.

The interview began with Baldwin asking Eid, a Syrian refugee living in Germany, about his intital response to the U.S. attack on Syria. His reply was that he was grateful saying that “…for the first time it happened. For the very first time we see Asaad held accountable, for once held accountable for his crimes against humanity. I was overwhelmed. I felt grateful for President Trump. I felt grateful for the United States.” He went on to thank those who “lobbied and called” and “someone actually listened”.

In a gesture that seemed to solicit a negative response, Baldwin interupted his response by saying “Kasemm, I understand your gratitude, but still you bring up Asaad and he’s still there…”

After Brooke Baldwin’s interruption, he replied that she was right and that Asaad was still there and still killing. He then reminded the news anchor the thousands of women raped and people killed and how Isis got started from people who wanted to take revenge on Asaad’s atrocities.

Kasemm Eid continued talking about atrocities committed by Asaad until she interupted him when he mentioned Russian involvement, to which she abruptly replied that the U.S. was investigating this involvment. Baldwin then shifted the sonversation by stating that there were Americans that did support Trump attack against the horrible gas attacks on the Syrian people,”… but at the same time this is a man who doesn’t want Syrians to come into this country with this refugee ban…”.

Eid, at this point, begins to respond but Baldwin, but before he could speak, she says “let me just play somke sound. Hillary Clinton weighed in.” A video clip played showing the former presidential candidate speaking at a Texas political event making a statement against the president talking about Syrian babies and then not allowing Syrian refugees into the United States.

After the clip was played, Baldwin asked him , “Quickly Kasemm, how do you see that?” with a tone in her voice that seemed to suggest that she expected a certain reaction from her guest.

Brook Baldwin tried to interupt him at one point by nodding her head and saying “Okay”, but Eid continued. He went on to repeat that refugees wanted to stay in their own country and that it was “hypocracy” and, once again repeating, “…ifyou really care then help us to stay in our country!”

The news anchor tried once again to interupt by saying twice, “I understand”, while nodding, but the displaced Syrian asked her for a few more seconds., which he took to publicly thank President Trump for what he did and pleaded him not to stop and then reitterated that Syrians want to stay in Syria.

By the subtle reaction and the expression on her face, Baldwin seemed to be surprised and unsure of what to say. This reaction is obviously counter to the narrative being broadcast by many of the major news outlets in the western world, which might be perceived an indication that the mainstream media is struggling to understand the culture and people for which it reportedly represents.