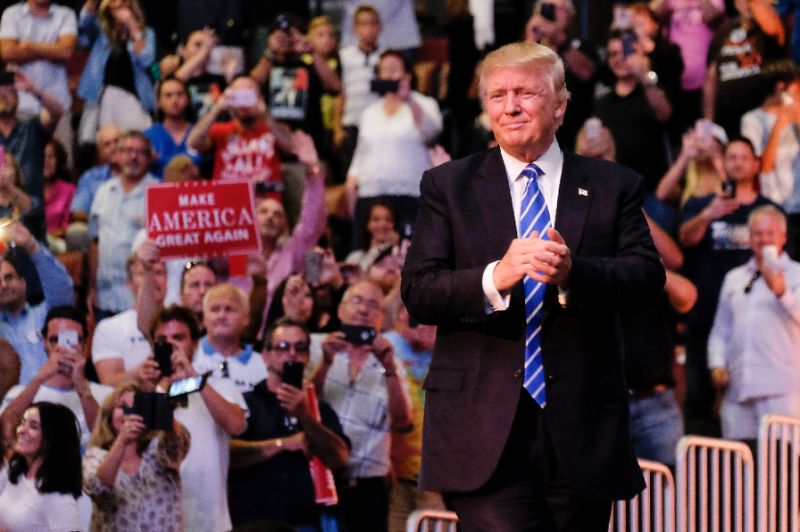 On August 17th an opinion article titled “The Trump Cult?” was published on Medium.com, by author Douglas Rushkoff. In it he outlines, based on his alleged studies of cults, what he considers the definition of Trump Supporters.

The piece was nothing more than a keeping with the mainstream media hysteria that surrounds President Donald Trump and his supporters.

This caused Internet Deputy writer Jake Fogg to counter with an article which dispels completely Rushkoff’s assertions.  The following is the rebuttal:

Trying to appear as “non-partisan” in order to hide your leftist ideology is failed after the first few paragraphs. I literally could take this entire piece and replace the word “Trump” with the term “leftist ideology” or “progressive” and I would be more on point than you.

The mainstream media claims to try to“understand” Trump’s supporters, but they will never understand because of their unwillingness to leave their leftist bubble. You, on the other hand claim to know what is going on by portraying Trump supporters as religious lemmings. It is worthy to point out that while packaging them into a neat little box, you fail to recognize the current “cult” that exists on your side.

Yes, you did briefly speak of Obama and Hillary followers, but you forgot the segment of the population that every day acts unhinged. Fueled by misrepresentations by the mainstream media, leftist institutions, and high profile lefties from Hollywood, these people seek to silence anyone who is conservative on any level.

They dress up in vagina hats as if there is some sort of real attack on women’s rights; they demand gun control; they harass and beat people; and they are so completely misinformed, that some actually think that Sharia law coexists peacefully with feminism. Sadly this leftist cult has literally been brainwashed, in some circumstances, since early childhood upon entrance into the public school system.

But, the truth is, you have no idea who Trump supporters are in spite of your bid to appear educated in this matter. I find it interesting how pseudo-intellectuals as yourself get away with pushing an emotional argument in the face of real empirical data. If you had been paying attention to the 2016 campaign, you likely would not have written this leftist piece at all.

Trump supporters weren’t all supporters during the presidential campaign. A good portion of them supported Constitutional candidates like Ted Cruz and Rand Paul. Many were screaming from the roof-tops AGAINST Trump because they feared that Trump would be a leftists, unable to carry out a “less government” agenda.

Cruz and Paul both wanted to get rid of one of the most destructive organizations in government since its inception in 1979 — the Department of Education. Trump was not talking about getting rid of it, but there were other things that Trump did that worried a large portion of the Conservative base.

Trump spoke very little of the Constitution itself and pushed the idea of tariffs. Free market conservative-libertarian types are against this. (Although, it seems that some of the tariffs are actually working at this point).

Once he won the nomination, most decided to support him because he was the closest person to represent their personal liberty. At that point, those who were not original supporters embraced what they did like about him.

Many of the concerns that conservatives had during the campaign were laid to rest with many of the decisions that Trump made once in office. Tax reduction, Supreme Court judges, tightening the border, and the attempt to destroy Obama care were some of the issues that were wildly supported by the conservative base.

For decades conservatives have stood by while the media defined that Republican Party and the establishment was willing to oblige. Republicans never stood up or fought back against criticisms that really amounted to outright bashing.

The media, academia, and Hollywood have worked relentlessly for many years to label Republicans, Conservatives, and even Christians as the complete opposite of what they are. In fact, the left in general is completely opposite of how it portrays itself, accusing those on the right of what they themselves engage in.

Republican constituents overall want liberty. Many of them understand basic economics and resent politicians who insult their intelligence. They understand that empirical evidence does not support Democrat claims overall. They believe in border control as a means to create a safer, more economically viable environment. Yet, their own representation pushes the idea that the “aisle” should be crossed on this issue.

Working with the other side only ensures what is happening in California will happen all over the country. The entire west coast is seeing a dramatic decrease in the middle class and the rise of a welfare class as a result of leftist policies being implemented in Democrat-controlled states.

They see the huge bureaucracies that prohibit the creation of small businesses, force housing prices through the roof, drive small businesses under/large businesses to other states. They see how expensive it is to operate a vehicle, rural municipalities literally forcing people off their property for contradictory regulations that only the rich can fight in court, and the refusal to repair roads in favor of forcing people onto public transportation and into shoe-box apartments in the big cities.

Conservatives see the creation of laws in California that serve to allow HIV patients to infect people without telling their partners. Laws exist in the state of California that allow school officials to take students off school property to give them LGBT training if they suspect that the student is in a household that doesn’t agree with homosexuality.

There are far more examples of egregious laws and policies in not only California, but in Democrat-controlled states. These policies, while disguised as “caring” or “tolerant”, the truth is they serve to destroy America in pockets all over the country.

Indeed, the left is the true agent of indoctrination and most who voted for Trump in the general election see the fallacies being perpetrated on them. Every day they are told by the media and just how “bad America is” with no comparison offered — just that it is a horrible place.

They are told how “racist” the nation is and how “we should all feel ashamed of our society”. They see young blacks who who are offered, disproportionate to any other race, millions of dollars to play sports, show their disdain for the country for a cause that has been completely lied about.

The one thing that used to be a universal conversation among people of all beliefs has been turned into a political arena along with almost every other form of entertainment. When Americans are tired of hearing the the sportsmen and the media spew this nonsense, they then have to hear it from the very high-profile leftist artists they pay to see and hear.

After years of taking this kind of behavior and disrespect by the media and its cohorts, supporters of Donald Trump are elated to finally see someone stand up and fight back. While the left slams every syllable muttered by the president as the end of the world or his “downfall”, people on the right see that he is fighting for them.

“Intellectuals” think they know everything regardless of the fact that, beyond their own expertise, they know very little. The media allows them to comment on things they have no experience in whatsoever. By contrast, most conservatives are more apt to be “intelligent” and NOT intellectual in their thinking.

As such, they understand that their liberty is at stake and bypass the Trump Derangement Syndrome exhibited by the left, concerning themselves with what truly matters.

Many Trump supporters read or listen to Thomas Sowell, Milton Friedman, Ben Shapiro, Michael Savage, and Mark Levin. Very few actually listen to only one kind of conservative point of view and the aforementioned represents a huge variance in political thinking.

To suggest that “Trumpsters” are a bunch of mind-numb robots who are swayed by charisma and rhetoric alone is absurd. The United States is, for lack of a more accurate term, in a civil war. On one side Americans see decades of corruption going unpunished while at the same time seeing the corrupt do everything in their power to overthrow a Constitutionally elected president.

On the other, there is literally a leftist cult that has resorted to violent means to silence, discredit, and even destroy the very people who brought about the election outcome.

Many who support the president, see this as a fight that, if lost, will mean the end of America as it was intended. They understand that if they fail, the government will grow beyond its limits and all freedom will be lost. When non-elite common people ultimately lose the ability to support themselves, create their own business, buy their own house, defend themselves, or even operate a vehicle, there will be no liberty.

People on the left will look at the above statement and call it a “conspiracy theory”, but there are countless examples of this already happening in certain parts of the United States. There are already officials demanding some of these things occur, in the interest of the “greater good”.

These issues are very real to the people who wish to maintain, or perhaps regain their liberty. Labeling Trump supporters as “cultists” is no only inaccurate, but it is yet just another attempt to relegate them to an unimportant, irrelevant pile of malcontents.