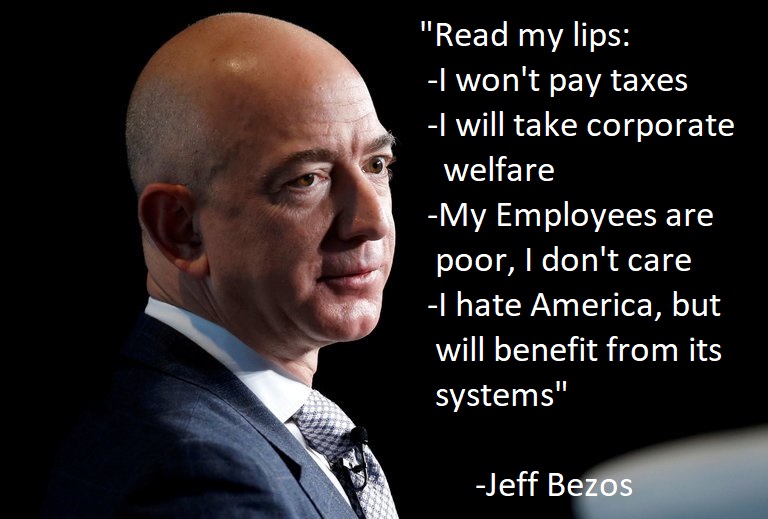 In addition, Amazon Inc. expects to get a $789 Million savings from Trump tax cut according to a report from the Institute on Taxation and Economic Policy (ITEP).

The massive company reported a $5.6 billion profit for last year and paid not a single dime to the federal government. While Internet Deputy does not support taxing corporations, this is a clear example of the elite mentality of the progressive mindset.

Progressives from all walks of life push for communist style government that insists that the “wealthy pay their fair share”. However, the wealthy who engage in this thought process tend to exclude themselves from abiding by their own terms.

The Amazon owner uses his pseudo-news outlet, The Washington Post, to lace current events with his political ideology that strongly supports the idea of redistribution of wealth. The organization has been caught spreading propaganda about the Trump administration even while it stands to make millions of dollars from its policies.

This recent revelation is really only a reflection of a long term trend which shows that Bezos only paid 11.4 percent over the last five years in spite of gaining more than $8 billion in profits during that time.

Amazon- WaPo deferred its taxes for the 2017 year in order to take advantage of new 2018 tax cuts which went from 35% to 21%- a 40 percent savings which is the source of the aforementioned $789 million.

Jeff Bezos has consistently engaged in taking advantage of taking every tax-cut possible dating all the way back to the 90s. As the company has grown, it has capitalized on state and local governments who provide tax breaks in vying for Amazon’s facilities to be built in those areas.

In addition, the highly profitable company has been receiving corporate welfare from the semi-federally run United States Postal Service. The USPS has been an insolvent organization that relies on tax dollars to operate, yet gives Amazon-WaPo slashed rates compared to its competitors.

The company, which many assume is a Seattle-based “American company” actually has its global headquarters in the tiny country of Luxembourg who shields the company from paying as much in taxes.  A recent dispute caused the European Union to accuse the little nation of giving illegal tax breaks to Amazon-WaPo and has ordered it to recuperate $295 million in back taxes.

The elite mentality has not only allowed Bezos to act as if he should be excused from his own progressive demands on taxes, but has also violated his own ideological demand that “companies should be paying higher wages.”  Indeed, a report from Policy Matters Ohio found that the Amazon-WaPo, one of the state’s largest employers, to have almost 24 percent of its Ohio employees belonging to families that receive Supplemental Nutrition Assistance Program (SNAP) benefits.

The progressive ideology argues that “living wages” be paid by employers. Bezos, while being a staunch progressive, shows his “above the law” mentality by ignoring his own values. This behavior shows a favoring of cronyism which can eventually lead to state-corporatism or true Fascism.

Many of the elites who own the largest corporations often cover up their hypocrisy by engaging in philanthropic endeavors, but Jeff Bezos has yet to create a foundation and donates little charity.

Essentially most progressive-communists/socialists support such ideas redistribution of wealth, higher taxation, state-run medicine, and forced living wages. Most elites do not practice what they claim to believe in, but at least try to appear to abide by their ideology. Bezos, however, seems to represent a new boldness that the next generation of elites may embrace.

It is possible that continuing to support the ideology alone in voice may be all that is required in the future by this class of hypocrites. With decades of brainwashing in the public schools and on college campuses, it is quite possible that a majority of future young adults will lack the ability to think critically enough to identify these contradictions by their leaders and will thereby support them faithfully.