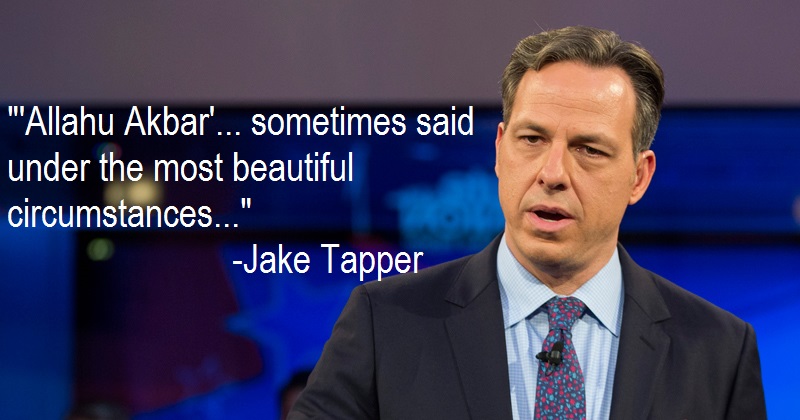 By:Jake Fogg
Oct  31 – Jake Tapper, during a CNN live interview, attempted to perpetuate a media narrative by asserting that the exclamation “Allahu Akbar” is “sometimes said under the most beautiful circumstances and too often we hear of it being said in moments like this(during a terrorist attack)”.

by a CNN crime and justice reporter, Shimon Prokupecz, who was explaining that witnesses heard the terrorist saying over and over, “Allahu Akbar!” when he exited the truck he was driving.

As often occurs in the mainstream media, Tapper tried to mitigate the roll of Islam in the recent Isis-inspired terror attack in Manhattan that took the lives of eight people. He, along with others in the mainstream media, consistently try to mitigate the thinking of those who are willing to watch the rhetoric disguised as news reporting, whenever an attack like this one occurs.

Sadly this type of attempted indoctrination happens in spite of the lack of open public renouncement by supposed “moderate” or “nice” Muslim groups. The Council of American Islam Relations (CAIR or CAIR- Hamas), for example released a simple statement. CAIR-Hamass is usually loud when it defends what it sees as an “attack on Islam”, but not when it comes to denouncing radical Islamic terrorism. It is also worthy to mention that CAIR-Hamas has also given money to terrorist organizations which delegitimizes any denouncement by the organization .

But, Jake Tapper was not the only member of the mainstream media to quickly defend the religion instead of just reporting the news. MSNBC “Terrorism Analyst” Malcolm Nance weighed in on the attack by stating “What you’re seeing is not Islam whatsoever…” Later in the segment he even went as far as to point out that Catholics from Canada converted to Islam and then “carried out acts of terror”, in an effort to try to minimize the Islam ideology. It seems that he was unable to find an example of an example where non-converted Christians had committed an act of terror.

The media’s attempt to indoctrinate its viewers on Islam shows a systemic disrespect toward the public. The assumption is that the consumers of the leftist drivel, Americans in general, are not intelligent enough to process what is actually going on. In their bid to “decipher” the issues for the “layman” the news networks seek to transform the issues from what has happened to what they want the public to think happened in order to maintain the general narrative.

Unfortunately this narrative contains contradictions within its own structure that are ignored. It is the brazen act of leaving out these incongruities that shows the utter disrespect the media has for the public, and/or demonstrates its own lack of understanding of reality.

The truth is, Islam has a tremendous problem identifying itself as the “peaceful religion” that the media and leftists try to make it out to be. Additionally, with so many in the Islamic community showing support for the controversial idea of Sharia law, it is extremely difficult for these same outlets to be intellectually honest in their supposed support for women and LGBT rights.

There is likely no more a systemic disrespect for the American public than the attempt by leftist and the media to link feminists, the LGBT community, and Sharia-abiding Islam into the same “oppressed” group. Controversial figure Linda Sarsour claims to be a feminist and a devout Muslim who supports women’s and LGBT rights, and Sharia Law.

Major media sources including CNN and Time Magazine have consistently given her favorable coverage in spite of her obvious conflicting stance. Sharia by definition is anti-Constitutional, anti-American, anti-LGBT, and of course anti-women. For example, the prescribed Sharia punishment for gays is burying them up to their neck and stoning them to death. Women are also subject to similar castigation for infractions as small as being seen in public without her husband or male family member.

Yet, the media not only ignores the facts regarding these punishments, but outright supports ideas like Sharia and seeks to demean those who speak out against the atrocities that the Islamic-related laws carry out. In June of this year, several media outlets tried to claim that the anti-Sharia march across the United States was nothing more than “white supremacists” and “racists”, when in fact the marches against the anti freedom ideology were supported by people of all walks of life.

The list of progressive contradictions in leftist mainstream journalism is long and detailed. While the intention of doing so could be related to trying to protect a group of people or an ideology, it is much more likely that it is part of the larger objective of creating animosity among Americans in order to bring about the destruction of the free society. In any case it can be said that blatantly lying to the public is disrespectful in the assumption that all will believe, or at least, will be compelled to believe by the force of hatred that its reporting creates.