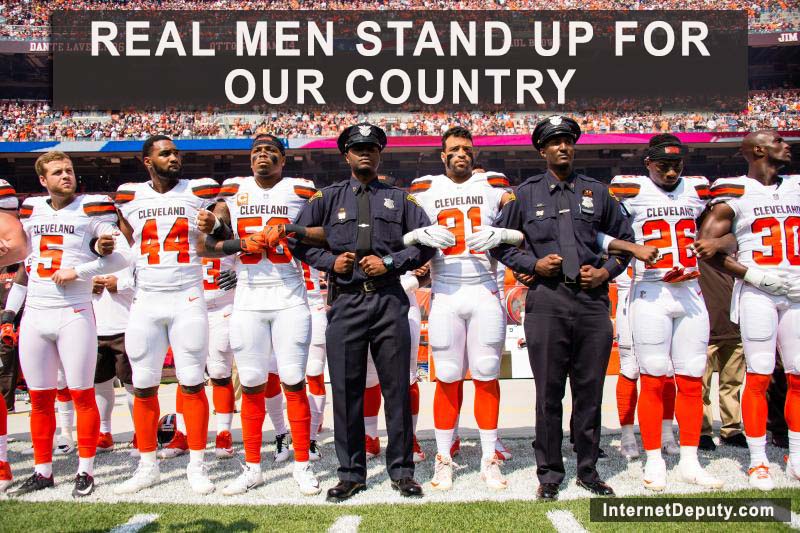 NFL players who have decided to “take a knee” in leftist protest, show disrespect for the American Flag and the National Anthem for a cause that may ultimately end up eating itself. Supporters of this so-called movement claim to stand for free speech and civil rights .

However, these agents of group think, actually contradict themselves, show ignorance, and contribute to the potential demise or reduction of million-dollar opportunities for many blacks.  In essence, their use of the playing field as a stage for protest, actually may result in the undermining of the protest itself and the destruction of the NFL.

President Donald Trump created a firestorm of criticism regarding comments he made at a rally on Friday. Regarding the spectacle of NFL players kneeling during the National Anthem, Trump stated, “Wouldn’t you love to see one of these NFL owners, when somebody disrespects our flag, to say; ‘get that son of a bitch off the field right now, out, he’s fired’?”

The criticism, almost entirely from the left and the mainstream media, has included statements regarding racism, first amendment, and white-supremacy. But, in spite of the self-important statements from these critics, the truth is, many Americans agree with the President, and not for the reasons that the high profile collectivist lemmings think.

One example of a contradiction took place when Jemele Hill of ESPN recently called the President a White Supremacist and predicted that his remarks would only spark more protests. Remarks of this nature are made in order to silence those with whom the left disagrees. This is especially the case when racist comments such as hers are included.

The irony, or contradiction, is that these so-called protestors use their “stage” in order to exercise their freedom of speech while at the very same time, trying to prevent the President from doing the very same thing.  In other words, it is okay for them do to their protesting, but NOT Donald Trump to demonstrate by saying something about it.

Donna Edwards, retired Democrat congresswoman from Maryland, Tweeted that all NFL players should “Take a knee against the White Supremacist who squats in our White House”. She followed with another Tweet that said, “For the record, I do stand for the flag. I stand because I respect our Constitution and value the freedom of speech of others not to do so.”

The racist Edward’s contradictory statement showed her ignorance of the law. This is a particularly troublesome statement to make from a former lawmaker, because it serves to demonstrate her lack of understanding of the very Constitution that she cited.

In fact, players under contract with the various sports teams are actually employees, and therefore, not afforded first amendment protection when they are playing. As in any employment situation, employees are required to follow communication guidelines as set by their employer. If they violate those standards, they run the risk of their employment being terminated.

The behavior of the football players this weekend could have devastating unintended consequences for the future of sports in general as well as the movement that kneeling during the National Anthem supposedly supports. 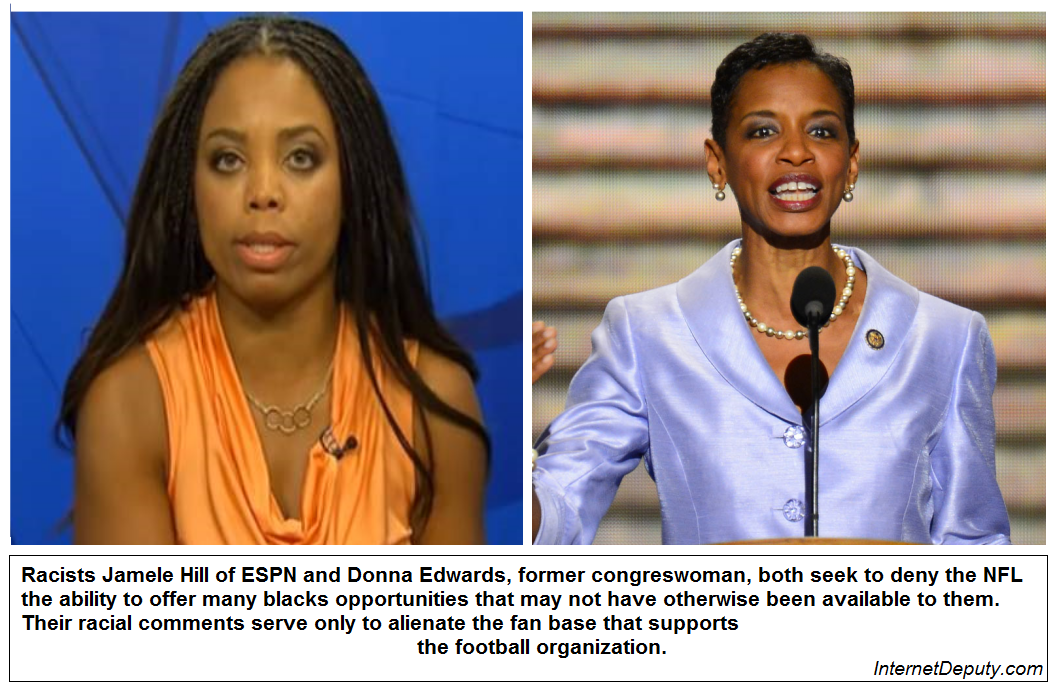 Colin Kaepernick originally “took a knee” over a year ago, apparently to make a statement regarding perceived police brutality towards blacks in a show of solidarity with the violent Black Lives Matter movement. There have been a handful of other players who have knelt since in other games until this weekend, when in response to Trump’s rally comments, players all over the United States joined in the demonstration.

Video footage in stadiums across the US showed fans booing the players when they demonstrated during the National Anthem. In addition, football fans all across the nation took to Facebook to show their disdain for the movement by burning and trashing their NFL merchandise on camera. The NFL as well as the left in general seems to have forgotten just how many people support the president and agree with his view of the anti-America protest.

The truth is, many Americans feel that kneeling during the anthem is actually a sign of disrespect toward the song as well as the flag. To those who have served in the military, the Anthem and American Flag are symbolic of the people who fought and died for the freedom of Americans to come together in a public place and enjoy the uniquely American pastime.

Most fans consider sports a pass-time whereby they can root for their teams unmolested by the day’s events, daily stresses, and especially politics. As Ben Shapiro of the Daily Wire stated, “We just want to watch football and drink a beer.”

The aforementioned sentiments will likely have a lasting impact on the NFL. This season has already seen a decline in NFL viewership and game attendance. As reported previously on InternetDeputy.com, the injection of politics in sports in general has also had at least some impact on sports viewership for the sports media giant ESPN with subscription numbers at their lowest since 2005.

A restaurant cannot expect to stay in business if its clientele is dissatisfied with the food and service. If the staff outwardly degrades the customers, it can be sure that they won’t return. Without return business, the restaurant will certainly end up closing its doors and the staff will have seen to its own demise.

The NFL is a business like any other with a customer base that supports it. The more fans the NFL turns away, the less viewership it will receive which, in turn equates to less advertising revenue, ticket sales, and merchandise sold.

The ironic outcome is that the organization, which disproportionately provides black players with life-changing opportunities, could eventually fall into a position whereby those opportunities could disappear. In other words, the organization’s effort to appease the players’ desires by allowing them to use the platform, could very well backfire resulting in inability to pay them exorbitant salaries.