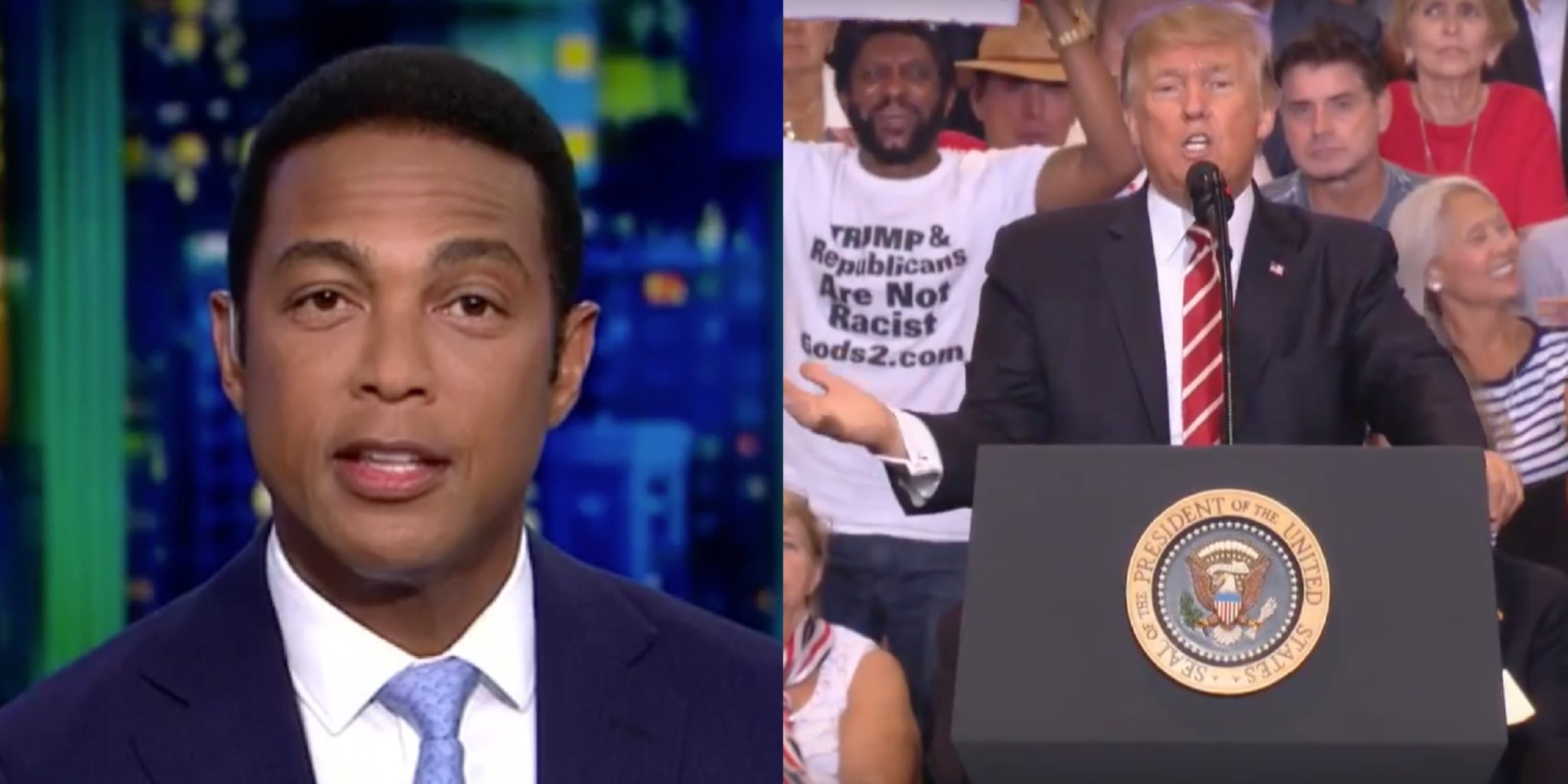 By:Jake Fogg
Don Lemon once again, reasserted CNN’s role as a leader in “fake news” and anti-Americanism by lying in a response to Donald Trump’s speech Tuesday night. His rant did little more than attack President Donald Trump by confusing his behavior with that of CNN's.

Lemon’s teleprompter-read speech was neither specific nor substantive and was obviously prepared ahead of time. It is even possible that this rant was prepared prior to Trump ending his speech in Arizona. This outlines the disdain that the so-called news organization has for the president as well as the 63 million people who elected him.

In the CNN hit-piece, Don Lemon begins his attack by saying, "I am just going to speak from the heart here. What we have witnessed was a total eclipse of the facts." He claimed that Donald Trump "came out on stage and lied directly to the American people, and left things out that he said in an attempt to rewrite history, especially when it comes to Charlottesville"

Don Lemon accidently described himself when he referred to Trump as “unhinged” and “embarrassing”. The continued statement thereafter was really an accurate description of CNN itself. “This is who we elected President of the United States? A man who is so petty he goes after people who he deems to be his enemy, like an imaginary friend of a 6-year-old?"

The false claim that Donald Trump lied to the American People was clearly a mistake by Lemon who may have been alluding to the undercover video by Project Veritas back in June.  The video showed a CNN executive claiming that the Russian collusion story was “bullsh*t” and was only continued in order to keep ratings high.

Only a day prior to the video revelation, CNN terminated three of its staff members for lying on a story that was eventually retracted due to pressure from wealthy investor, Anthony Scaramucci, who was erroneously slandered in the story.

Lemon’s remarks about rewriting history may also have been related to CNN’s own actions.  It is CNN that has and continues to “rewrite history”. The story that reported Lemon’s rant was written by Josh Ryan and reiterated that the President acknowledged that there was hate on “both sides” which CNN refuses to admit.

In an effort to continue the “evil right-wing” narrative, Ryan then wrote that Trump was “appearing to equate neo-Nazis with the people protesting against them in Charlottesville.”  On-the -ground video footage shows that there were indeed two sides and they both fought.

Lemon seems to have quickly forgotten that CNN has a history of “going after people it considers its enemy”.  As recent as last Thursday’s terror attack in Barcelona, Spain, the news company’s anchorman, Wolf Blitzer and CNN’s chief national security correspondent Jim Sciutto actually tried to link the Charlottesville protests with the Isis-claimed attack.  This was clearly an attempt to smear the President by trying to blame him for the horrific attack that killed 15 people.

Sciutto stated, “In light of the uproar of the last several days, five days apart you have a white supremacist use a vehicle to kill and here you have attackers at least following the modus operandi of terrorists, apparently using vehicles to kill as well, and those shared tactics should be alarming,” he said ignoring the fact that several terror attacks have taken place with vehicles in countries all over Europe.

Blitzer, on air responded, “There will be questions about copycats, questions about if not what happened in Barcelona was at all, at all, a copycat version of what happened in Charlottesville, Va. Even though they may be different characters, different political ambitions, they used the same killing device — a vehicle going at high speed into a group, a large group, of pedestrians.”

As mentioned earlier,CNN to date has not been willing to acknowledge that the Charlottesville protests were comprised of two leftist groups—the white supremacists and Antifa. Instead, the fake news organization has doubled down on its attempt to link the white supremacists with Constitutional Conservatives. Conservatives run contrary to the belief system of leftist CNN and therefore have always been a target of the network.

CNN, while having no evidence, has for many years tried to paint conservative Tea Party groups as “racist”, “homophobic”, “Islamaphobic”, and so forth.  In reality Conservatives actually seek freedom from government slavery for all races, creeds, and national origins.

Lemon’s video, ironically supports the very issue of the Charlottesville protest that CNN claims to be against. The protest regarded the removal of a statue of Robert E. Lee. The left with its Antifa para-military arm contends that the statue should be taken down to remove the reminder of slavery of the past.

But, what Lemon, Blitzer, Ryan, and other members of the pseudo-intellectual class fail to admit is that by doing so, in effect, erases history, thus giving their progressive movement the ability to implement its intended outcome of slavery on a larger scale, via the government.