Published: Saturday, 05 August 2017 08:11 Hits: 2635
John McCain "Bring Back Gang of Eight Bill!"
Another Show of Anti-Americanism and Disdain for His Voter Base 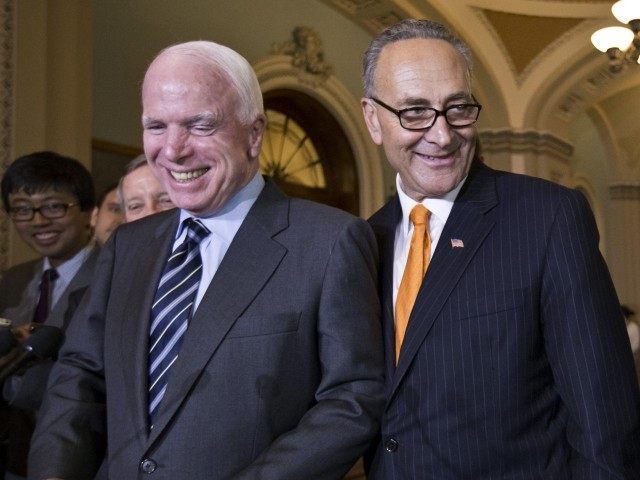 John McCain has showed once again that he is not a “maverick”, but a common elitist who feels he knows better than We the People.

According to Breitbart News, McCain met with Senate Minority Leader, Chuck Schumer about “joining forces” to re-pass the highly unpopular “Gang of Eight” bill that was introduced back in 2013.

John McCain told The Arizona Republic that he met with Schumer just before returning to Arizona for brain cancer treatment. He told the Republic that he felt that lettuce grown in Arizona is picked by illegal aliens who will do a

job that “no Americans will do”.  He also said “Immigration reform is one of the issues I’d like to see resolved.”

The Gang of Eight bill included amnesty for millions of illegal aliens as well as an increase of H1-B visas which allows companies to import cheaper workers to displace Americans in the work force, particularly in areas of technology. When this bill first passed in the Democrat-controlled senate, the Republican-controlled House never took it up due to the unpopularity with GOP constituents.

The bill was so unpopular and detested, that three years later during the 2016 presidential campaign, it was one of the contributing factors to the poor performance of establishment Republican candidates in the primary.

Marco Rubio was one such candidate who was also one of the “Gang of Eight”, a fact that he spent much of his campaign trying to distance himself from. In spite of walking back his position on the matter, other candidates repeatedly used this against him. Donald Trump, who ran on a “non-establishment against illegal immigration” platform, especially pummeled Rubio in public forums and in social media.

Political elitist actions like the “Gang of Eight” are precisely why a non-establishment candidate like Donald Trump was elected. And yet, even with such a referendum on the political landscape, some Republican politicians such as John McCain refuse to acknowledge what the Trump election meant.

In fact, McCain has not only ignored the American people, but has doubled-down on his blatant anti-constituent activity by working with Democrats in the senate instead of working for his base. After returning from his recent surgery that indicated that he has brain cancer, he lectured Republicans on how to work across the aisle. In the same speech he implied that those who disagree must be listening to conservative media and unable to think for themselves.

Shortly after slamming conservative thinkers, McCain was one of only three Republicans in the Senate that prevented the repeal of Obamacare, voting completely against the promise he made to his constituents. He is on record for making the promise to vote for repeal, but a typical elite, his promise was only to get reelected so that he could continue to act in a way that he saw fit instead of representing his constituents.

John McCain has been considered a “Maverick” by the media, but this is only as far as how he behaves contrary to what is supposed to be his party’s platform. However, the term is not accurate in that he acts no differently than any other establishment politician. This is particularly true when compared to those in the Democrat party. McCain, by definition is really acting on a Democrat platform regardless of his position as a Republican.

While McCain has consistently acted as a RINO, it is unclear how much of his recent rebellion is due to the brain cancer that he has been diagnosed with.