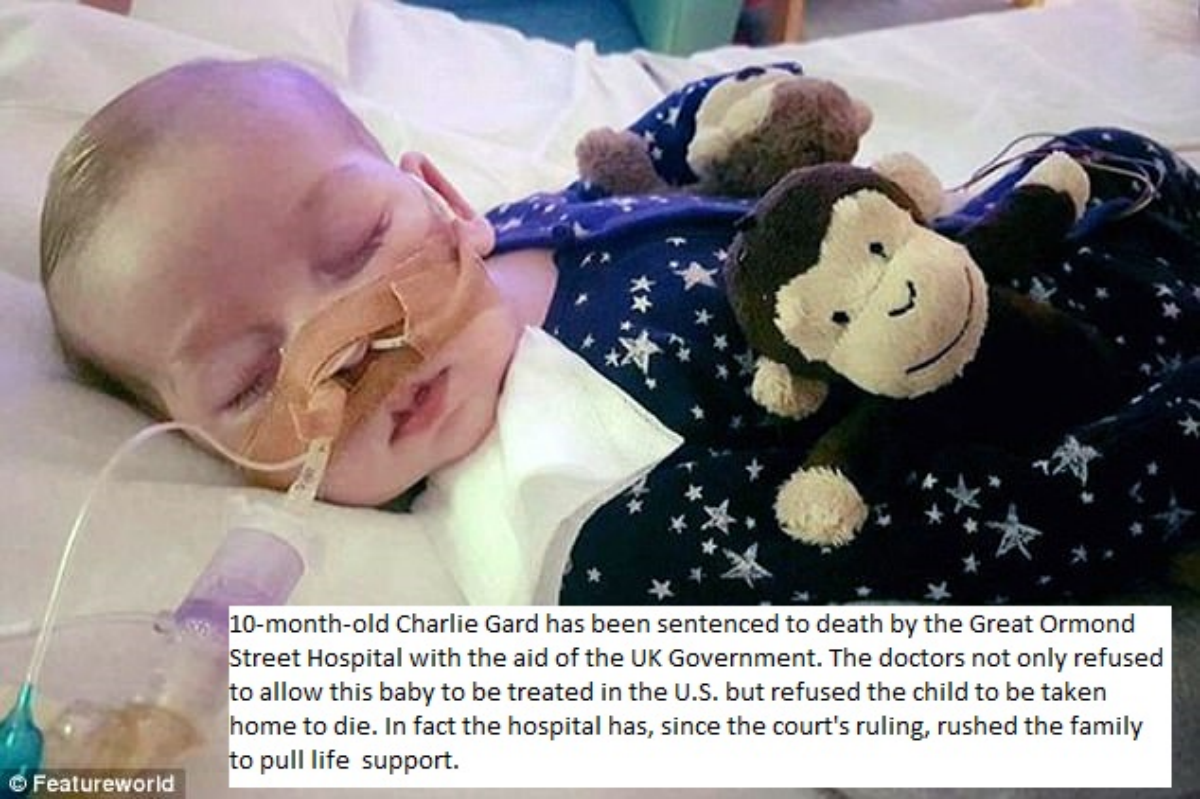 As Americans all over the United States are set to celebrate Independence and Liberty on July 4th, a couple in London will be reminded of the liberty they do not have.  On or around that day they will spend their last moments with their baby who was sentenced to death by their country’s government and a hospital that is rushing to pull the plug on the child’s life support.

While celebrating the Fourth has, for many, become an “excuse to party”, the timing of this death-panel decision should serve as a reflection of what it is that is being celebrated. The murderous decision, after all, demonstrates what happens when people sacrifice their liberty for “justice” and a false sense of security.

Charlie Gard, a ten-month old baby was diagnosed with a rare genetic disease and has been receiving care at the Great Ormond Street Hospital for Children in London for several months. In February the hospital sought legal action to kill the child saying that they wanted him to “die with dignity”.

However, Charlie’s parents, Chris Gard and Connie Yates, lost the local court battle and the U.K. judges sentenced the baby to death. The court decision happened in spite of the parents finding a doctor in the United States who had successfully treated another with a similar terminal condition through experimental treatment.

In socialized medical treatment, as in the U.K., people are no longer living, breathing individuals with a right to live. Rather, they are relegated to being no more than a bureaucratic decision by parties who have no personal or vested interest, based on government expenses.

But Charlie’s case was much different in that not only was a doctor abroad ready to treat the child, the parents had already raised $1.4 million through a GoFundMe account, thus disallowing the argument of the government’s financial burden.  Yet, when Charlie’s parents tried to appeal the U.K.’s death sentence in a higher court, the European Court of Human Rights (ECHR) refused to even hear the case.

It is therefore understood that since price of treatment was not an issue, and the child essentially had nothing to lose, this was a case of a hospital, backed by the government, asserting its power and authority over a couple whose child may have had a chance.

This is the result of the elitist pseudo-intellectual thought process typically associated with socialist-progressive societies. While disguising itself as a caring endeavor, the ideology of such thinking is actually that “only a few enlightened or anointed” know what is best for the masses.”

The unwritten assumption spoken only among elites is that “the people” are not smart enough to make their own decisions. And, in typical elitist fashion, they will double-down on their claims and ideas even when proven wrong. They have too much of their ego and reputation invested in their ideology to acknowledge that they are wrong.

In this case the doctors were so adamant to assert that they were “right” that they would see to it that a child be murdered in order to ensure that the doctor in the United States could not prove them wrong. Their ideology requires that no other alternatives can exist simply because it did not come from their office.

In fact, without providing reasons why, the hospital actually told the parents that, “therapy in the U.S. is experimental and will not help and that life support should stop.”  This remark or any other given by the hospital showed no indication that the parents’ rights or desires were even considered. This is no less than totalitarianism.

In a statement on May 25th, the Great Ormond Street Hospital also claimed, “The medical and legal consensus, confirmed by today’s ruling, is that it is in Charlie’s best interests to be allowed to die with dignity.”  By using the word “allowed”, the doctors deemed it an axiom that the child wanted to die.

But, a child at this age does not possess the faculty to speak or even reason enough to weigh the options before it to make this determination. In a free society it is understood that the parents truly hold Charlie’s “best interest”, not third party bureaucrats interested in advancing their ideology.

Charlie Gard’s parents are responsible for raising their child and maintaining his well-being. They have endured the pain of seeing their son in decline and unable to live without life support.  They have a far greater interest than progressive doctors that feel they know “better”. 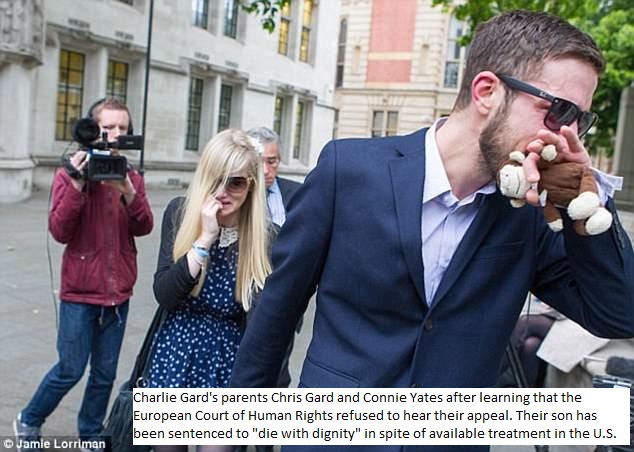 The behavior that marks socialist-progressive society is not isolated to just those in the medical field. The pseudo-intellectual elites have taken over many parts of society and thus, stripped parents of their rights. Internet Deputy on May 31st, reported on the National Union of Teachers conference that took place in Cardiff, Whales last April.

A review of the conference agenda reveals that teachers in that union consider themselves more important to children’s development than the parents.  The government works in concert with these teachers to allow them to teach social

While the story of Charlie Gard is sad, it should be taken quite seriously in the United States, where currently, this type of scenario does not occur. However,  what happened in the U.K. is indicative of what is to come if we continue to allow our freedoms to erode.

The United States embarked on its first major step toward complete socialized medicine. During the health care debates that took place in 2009, Governor Sarah Palin was publicly castigated and ridiculed by president Obama for calling one part of the proposed Affordable Care Act, “death panels”.

Yet, this is exactly what we just witnessed in London with little Charlie Gard. It is easy for politicians to sell the idea of socialized medicine, by marketing it is “free healthcare”.  But the people who pursued with this nonsense have a very dark secret.

Allowing the government to control medicine is tantamount to surrendering all freedom. Healthcare provides politicians with more reason to take freedoms from the people in the name of “keeping all people safe and healthy.”

There may be some hope for the United States, however. In a first for President Donald Trump, who was intent on “repealing and replacing” Obamacare, he tweeted on June 30th, “If Republican Senators are unable to pass what they are working on now, they should immediately REPEAL, and then REPLACE at a later date! “

While this would be optimum for the short term, it would be even better if the politicians in this “free society” figured out how to allow health care to go completely back to a free market system, thus ensuring complete freedom in the way medical treatment is chosen and carried out.

But, more importantly, the people of the U.S. need to look to the murderous practices of the United Kingdom and other European nations. They have partaken in a political system that necessarily requires their citizens to give up their freedom.

While not to the same extent, the United States has witnessed an erosion of personal freedoms including parental rights. In California, for example, there are laws that force children to go through “LBGT tolerance training” against their parents’ wishes. There are several school systems all over the U.S. that force children to “experience Islam” while disallowing Christian speech in its entirety.

The death sentence handed down to an innocent child was not a matter of catering to a “child’s best interest”, but instead a tremendous loss of liberty that rendered parents powerless to protect their own child. Therefore, citizens of the United States must be aware that, though not as extreme yet, their government policies are quickly  trending in the same direction as the European model.  And, if allowed to continue, will eventually culminate in the same loss of freedom.

The celebration of Independence Day has, as earlier mentioned, become largely a platform for cook-outs and parties. But what is being celebrated? How many realize just how much freedom has already been lost in the name of “social progress” and “fairness”?

Indeed, the Charlie Gard story, horrifying and sad as it is, should rekindle the fight for what this nation’s founders originally intended when Thomas Jefferson penned the Declaration of Independence in 1776.
0
0
0
s2sdefault
powered by social2s